The Senate Agriculture Committee recently passed a version of the Farm Bill that now moves for debate in the entire Senate. This Bill replaces direct, counter-cyclical, and SURE payments with Agricultural Risk Coverage (ARC), a revenue-based program that is further described in yesterday’s post by Carl Zulauf (see here). In today’s post, ARC payments are computed for cases in which prices are low for several years. This emphasis is taken as ARC is specifically designed to provide protection in cases of multi-year revenue losses, cases in in which crop insurance often provides limited protection. ARC payments are computed for corn in Champaign County, Illinois, as further described in the next section.

If ARC comes into existence, farmers will make a choice between using either 1) county yields or 2) individual farm yields. This selection is made at the beginning of the Farm Bill and is scheduled to be applicable for marketing years 2013 through 2017. Calculations for county ARC are illustrated below. Difference between the county and farm program then are outlined in the following subsection. 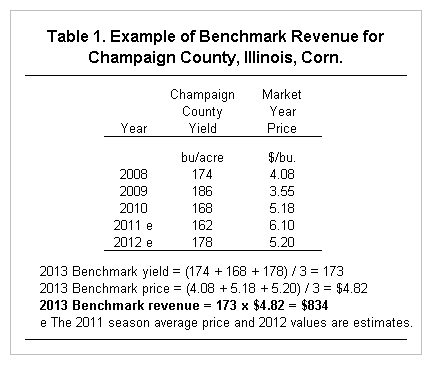 Per acre payment are based on the shortfall times a factor. The factor is .80 for planted acres and .45 for prevented planted acres. Use of these factors effectively causes ARC to only cover a portion of losses between .89 and .79 of benchmark revenue. For a planted acre, the ARC payment on a $42 per acre shortfall is $34 per acre (.8 x $42). Payments would be received on planted acres, with a limit that planted acres for all crops cannot exceed average plantings from 2008 through 2012.

The lower payment factor is designed to equalize payment of county ARC and farm ARC across the United States. At the same payment rate, farm ARC would make more payments than county ARC because farm yields are more variable than county yields. 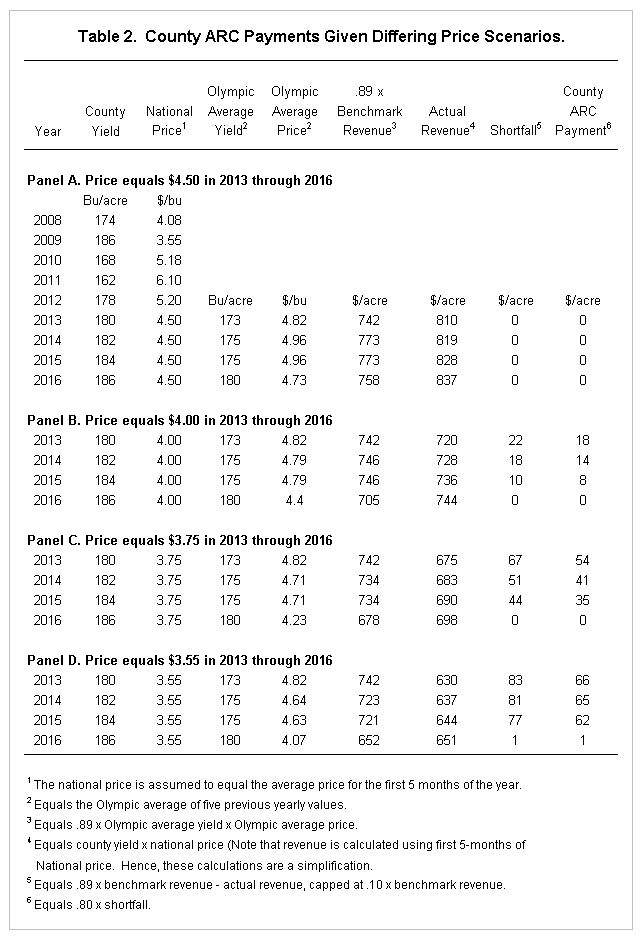 ARC is designed to protect against multi-year revenue declines, as these would not be covered by crop insurance. An example is for lower prices that occur across years. Impacts of lower prices are examined in Table 2 for the Champaign County example. In this example, county ARC payments are calculated for 2013 through 2016 with county yields growing at trend rate of two bushels per year (180 bushels in 2013, 182 bushels in 2014, and etc.). The same price in 2013 through 2016 is used to calculate county ARC payments. For example, Panel A has a $4.50 price in each year from 2013 to 2016. In the examples, the national price for the entire year is assumed to equal the average of the first five months of the marketing year.

A number of studies suggest that corn prices will average $4.50 over time (see here). A $4.50 price is below recent national prices of $5.18 for 2011 and an estimated $6.10 for 2012. A price of $4.50 from 2013 through 2016 would not generate county ARC payments, given that county yields are near expectations (see Panel A of Table 2) Hence, price near long-run prices would not generate ARC payments unless county yields decline by more than 11%. Before an ARC payment would be generated in 2013, price would have to be below $4.12 per bushel.

In 2009, the National price was $3.55 per bushel. Historical deviations suggest this price or lower could happen in 10 percent of years. A price of $3.55 for several years would be rare. Not that this $3.55 price is considerably above the $1.95 loan rate, suggesting that this loan deficiency payments would not occur. A series of $3.55 per bushel prices would generate ARC payments of $66 per acre in 2013, $65 in 2014, $62 in 2015, and $1 in 2016. Again, county ARC payments would partially cover revenue declines. ARC payments will decline over time as lower prices enter into the calculation of benchmark revenue.

ARC will make payments if revenues reach lower levels. In years in which revenue declines, ARC payments will be useful to farmers.

ARC payments will offset some of the losses in gross revenue. The entire loss will not be covered because 1) the .89 factor used to calculate the guarantee effectively puts an 11% deductible on revenue losses, 2) payments are a factor of the shortfall (.80 for the county program and .65 for the farm program), and 3) ARC payments are capped at 10% of benchmark revenue.

If prices are persistently low for several years, ARC payments will decline over time as lower prices enter into the calculation of benchmark revenue. Hence, ARC will provide payments in early years of a multi-year price decline, eventually though farmers will need to fully adjust to price declines as ARC payment decline.