The value of machinery on the farm has changed considerably over the recent ten years. Data from a group of grain farm operators who are members of the Illinois FBFM Association details these changes as seen in Figure 1. One would expect that as acreage increases, the value of the complement of machinery needed to till, plant, and harvest those acres to increase as well. While this is obviously a factor, there appears to be other factors involved as well. The gap between the red (2000) and the blue (2010) lines in Figure 1 show and increasing rate of the Total Machinery Value in 2010 over 2000. This is represented in that the curve of the 2010 line is much steeper than the 2000 line. The price of new machinery has increased markedly over this period; the value of used machinery has increased as well. Both of these factors in addition to farmer-friendly tax policy in the form of Bonus Depreciation and the IRS Code Section 179 Expense Election have likely advanced the level of capital purchases on the farm. Bonus Depreciation was set in place in 2001 at a 30% rate; in 2010, Bonus Depreciation was at a 50% rate. The 2000 Section 179 Expense Election limit was $20,000; by 2010 the limit has increased by 25 times the 2000 level and was $500,000. 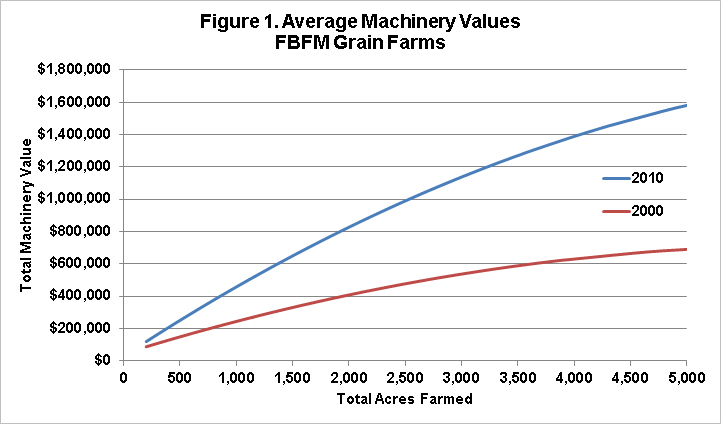 When viewed on a ‘per acre’ basis (see Figure 2) the change from 2000 to 2010 reveals that the curve shows that farms at the lower end of the acreage range have a higher per acre machinery cost. Even for a smaller farm, there is a minimal level of machinery needed to operate that farm and that minimum complement of machinery is more expensive in 2010 than it was in 2000. 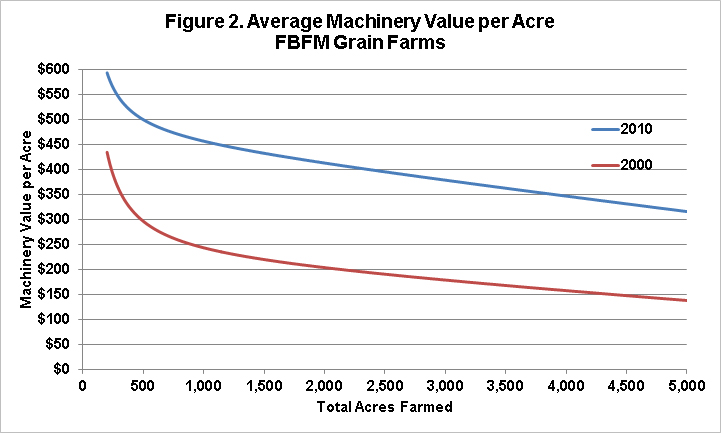 On a ‘whole farm’ or a ‘per acre’ basis, the investment in machinery has approximately doubled from 2000 to 2010. The returns need to support this increase cost have doubled as well.

The author would like to acknowledge that data used in this study comes from the local Farm Business Farm Management (FBFM) Associations across the State of Illinois. Without their cooperation, information as comprehensive and accurate as this would not be available for educational purposes. FBFM, which consists of 5,500 plus farmers and 60 professional field staff, is a not-for-profit organization available to all farm operators in Illinois. FBFM field staff provide on-farm counsel along with recordkeeping, farm financial management, business entity planning and income tax management. For more information, please contact the State FBFM Office located at the University of Illinois Department of Agricultural and Consumer Economics at 217-333-5511 or visit the FBFM website at www.fbfm.org.