The commercial banking industry has been changing rapidly over the past three decades. Changes have occurred in the structure of the industry as well as innovations in the delivery of financial services to individuals and firms. There are continued concerns that the changing landscape and the newer regulatory environment could impact niche banks and banks operating in rural areas.

Innovations in mobile and electronic banking in addition to access points provided through the more than 2.2 million automated teller machines around the world have increased the opportunities for some financial services to be delivered remotely. These innovations have also allowed nonlocal and nontraditional lenders to offer financial services in rural areas.

Strong lender-borrower are prevalent in agricultural lending and the delivery of financial services in rural areas. Rural banks have traditionally supported local economic development and growth by supplying funds to local businesses. Consolidation across the banking industry often raises concerns about the delivery of financial services to agriculture and rural businesses. The willingness and ability of commercial banks to deliver agricultural and rural loans efficiently will play an important role in maintaining and expanding rural economies.

The number of insured commercial banks in the U.S decreased 56% from 14,496 in 1984 to 6,291 in 2011 (Figure 1). Changes in the regulatory environment, including liberalization of geographic restrictions on branching and interstate branching, reductions in reserve requirements, deregulation of deposit accounts, and capital requirements, are fundamental drivers of bank consolidation. The decline in the number of institutions is primarily due to bank mergers. The peak of the merger wave started in the late 1980s and continued into the early 2000s (Figure 2). Bank failures have exceeded 100 banks per year the past 3 years since the start of the financial crisis. 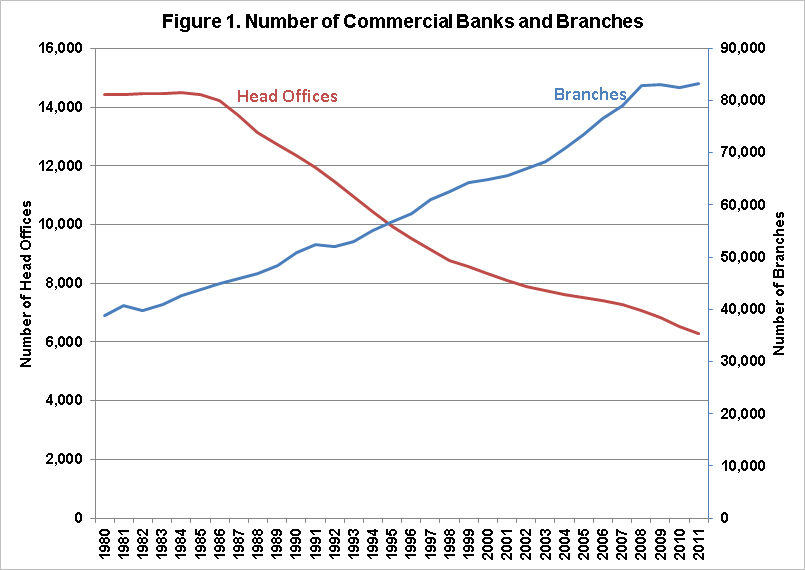 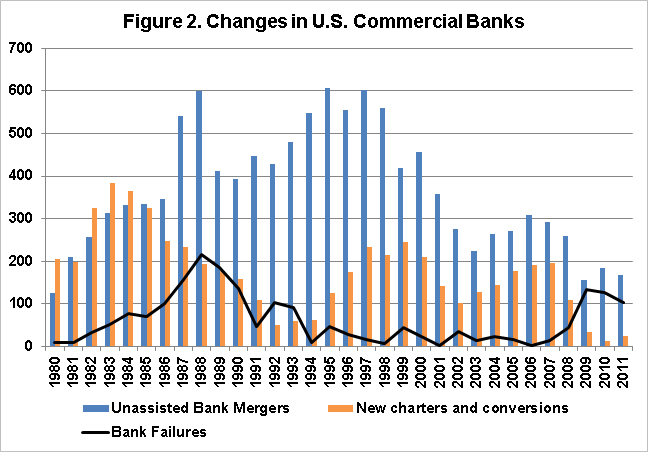 Although there are still more than 6,000 banks in the U.S., the consolidation of banks continues to raise concerns about the concentration of the largest banks. The deposit market share of the largest 3 banks (ranked in terms of domestic sourced deposits) has increased from 5.9% in 1996 to almost 30% in 2011 (Table 1). The nation’s largest 50 banks held over 65% of domestic deposits in 2011. Provisions in the Dodd-Frank Wall Street Reform and Consumer Protection Act are intended to address emerging threats to financial stability and address large, systemically important financial institutions. Dallas Federal Reserve President Richard Fisher expressed his concern about the too-big-to-fail banks. The competitiveness of smaller, rural-based banks with these larger banks also remains a concern. 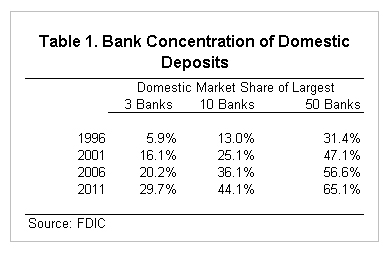 The distribution of branches across county typology is also summarized in Table 2. Approximately 40% of low-population, completely rural counties do not have a branch located in the county. Improvements in communication and internet banking technology should improve access to competitive financial services in these areas. It also appears that a high proportion of nonmetro counties have access to multiple branches that can potentially provide competitive financial services.

In summary, considerable changes are occurring across the banking landscape. Although bank consolidation has increased, bricks and mortar branches and online access have increased the capability of banks to provide financial services. There will continue to be considerable debate regarding the concentration of the largest banks and the potential risks to financial stability and potential changes in the competitiveness across the banking industry.