Every two years, the costs of machinery operations are calculated and made available on farmdoc. The 2012 costs now are available under the “Machinery Costs” link in the farmdoc Management section. Overall, costs have increased by about 15 percent between 2010 and 2012. In our estimates, combine costs have declined between 2010 and 2012 because acres covered with the combine are assumed to increase in 2012. 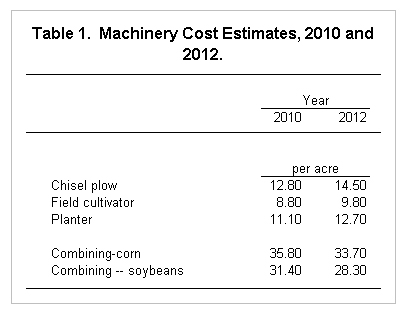 Machinery costs generally have increased between 2010 and 2012. Estimated cost increases would have been larger had not interest rates declined. Machinery costs will increase in the future if interest costs begin to rise.