Low corn and soybean yields are increasingly likely as hot, dry weather is forecast to continue over much of the corn-belt during the critical corn pollination period. Lower yields then lead to questions about grain farm incomes in 2012. Grain farm incomes likely will be above projections made in winter of 2012, assuming that crop prices increase if crop yields are below trend-line levels. However, some farms will suffer losses. Farms that did not purchase crop insurance could face losses. Also, grain farms that have hedged a great deal of expected production could have lower incomes than those farms that have not pre-harvest hedged as much grain.

These conclusions are reached by simulating 2012 net farm income under drought conditions for a farm typical of northern and central Illinois. This farm has 1,200 tillable acres, with 10 percent of the acres owned, 60% cash rented, and 30% share rent. Cash rent is $295 per acre. The farm has non-land costs of $514 per acre for corn and $306 per acre for soybeans. Debt level is $480,000. The farm purchases Revenue Protection (RP) crop insurance at an 80% coverage level for both corn and soybeans. The Trend Adjusted Actual Production History (TA-APH) yield is 180 bushels per acre for corn and 50 bushels per acre for soybeans. 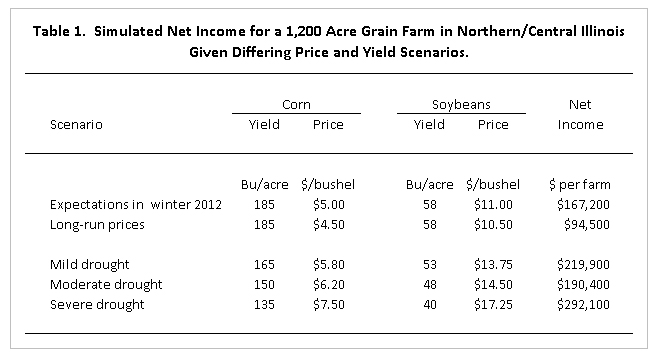 Net farm incomes under drought conditions are compared to two base cases.

The mild drought scenario represents continuing dry weather, but eventually a return to more normal weather that includes some rains during the growing season. Net income under this scenario is forecast at $219,900; above the income given winter expectations (see Table 1). While yields under the mild drought case are lower than winter expectations, higher prices offset yield declines.

A severe drought has a corn yield of 135 bushels per acre and a soybean yield of 40 bushels per acre. Widespread yields at these levels likely would result in dramatic increases in corn and soybean prices. A $7.50 corn price and a $17.25 soybean price are used in this scenario. Given these prices, income under a severe drought is projected at $292,100, up considerably from winter expectations. Crop insurance payments are occurring under this scenario. As a result, further yield declines would not have much of an impact on incomes because lower crop revenue is offset by higher crop insurance proceeds.

The above scenarios suggest that many farmers would not have lower incomes due to lower yields. There are three important cases in which incomes could decline:

Grain farm incomes may not be adversely impacted on many farms if there are higher prices associated with lower yields, a reasonable assumption given the widespread nature of dry weather this year. Somewhat ironically, lower yields this year may postpone the return to lower prices, as another supply disruption will keep grain stocks at low levels. This could then lead to 2013 price expectations above long-run levels and higher than would be the case had trend-line yields occurred in 2012. This conclusion, however, is based on the assumption that no long-run reductions in consumption occur, which could be the case if very high prices occur in 2012. Reduced consumption would then result in lower incomes in 2012 than presented above. It could also lead to lower grain farm incomes in future years.