Crop insurance could make large payments in 2012 as low yields become increasingly likely as a result of hot, dry growing conditions. Roughly 60% of the corn acres and 50% of soybean acres in Illinois is insured at high coverage levels with revenue products containing guarantee increase provisions. These acres likely with receive large payments if drought conditions continue. After describing crop insurance use in Illinois, potential insurance payments are illustrated.

Crop Insurance Use in Illinois

Information on 2012 crop insurance purchases is not yet available. However, purchases in 2011 serve as a good guide for 2012 purchases. Following recent trends, acres insured and coverage levels in 2012 likely increased slightly from 2011 levels.

In 2012, 78 percent of the corn acres in Illinois were insured. Of the acres planted, 59 percent were insured with Revenue Protection (RP) and 7 percent were insured with Group Risk Income Plan with the harvest price option (GRIP-HR). These two products accounted for most of the acres insured in Illinois. Both of these products have a guarantee increase provision which causes the guarantee to increase if the harvest price is above the projected price set in the spring, an increasingly likely event if drought causes lower yields which then lead to lower corn supply and higher prices.

These use statistics point to a bimodal distribution of insurance coverage in Illinois. On the one hand, 60% of planted acres were insured with RP at a high coverage level or GRIP-HR at the 90% coverage level. These policies could make large payments if drought conditions lower yields. On the other hand, 40% of the acres were not insured or were insured with products that likely will not make large payments if drought lowers yields.

The potential for larger insurance payments from RP is illustrated in Table 1, which shows RP payments for an 80 percent coverage level. The policy in Table 1 has a 185 bushel Trend-Adjusted Actual Production History (TA-APH) yield. The projected price for 2012 of $5.68 is used in the calculations. Payments are estimated using the “What-If” sheet in the 2012 Crop Insurance Decision Tool, a Microsoft Excel spreadsheet available for download in the FAST section of farmdoc . 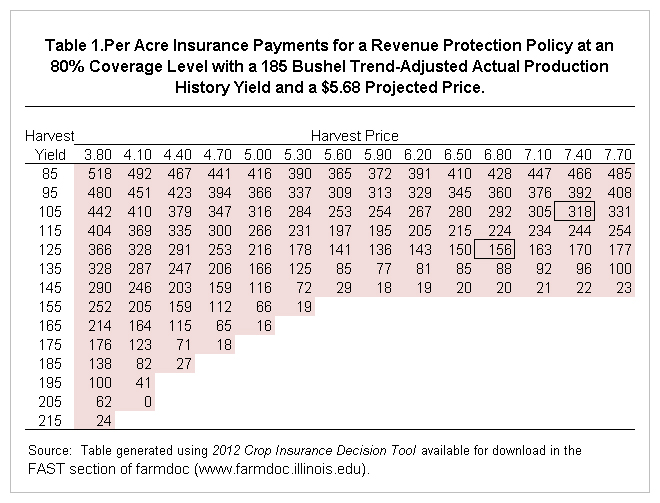 Farms that have purchased RP and GRIP-HR products at high coverage levels could receive large crop insurance payments in 2012, thereby offsetting crop revenue losses from lower yields. These farms may not have as low as incomes as might be expected from a yield decline, partially because of insurance payments and also because prices may increase if yields are low, as illustrated here.

Farms that do not have crop insurance at high coverage levels are more at risk for low incomes. However, price increases may offset some of potential decreases in yields. This offset assumes that not much of the 2012 crop has been already priced at what could turn out to be lower prices than during the fall of 2012. As a result, farms that did not purchase crop insurance and have hedged a great deal of the 2012 crop are particularly at risk for lower incomes in 2012.