USDA’s National Agricultural Statistical Service has released projected 2012 Crop Reporting District (CRD) yields for Illinois, Indiana, Iowa, Kansas, and Missouri. These projected CRD yields are compared to trend yields so as to find areas where the 2012 drought caused the largest yield declines in corn and soybeans. Overall, yields are most below trend yields in eastern Kansas, northern Missouri, southern Illinois, and southwest Indiana.

CRDs whose 2012 yields are between 0 and 50 percent of trend yields occur in an area beginning in eastern Kansas, continuing across much of the northern two-thirds of Missouri, extending across southern Illinois, and ending in the southwest Indiana (see Figure 1). From a corn yield perspective, this area has the largest percentage decline in 2012 yields. CRDs next to these hardest hit areas tended to have low yields. There were a number of CRDs that had yields 50 to 60 percent of trend yield in Kansas, Illinois, and Indiana. Relative to trend, CRDs with the highest yields are located in Iowa, southwest Kansas, and southeast Missouri. However, there are no CRDs where 2012 projected yield exceed 90% of trend yield, indicating that yield losses occurred across all these states. 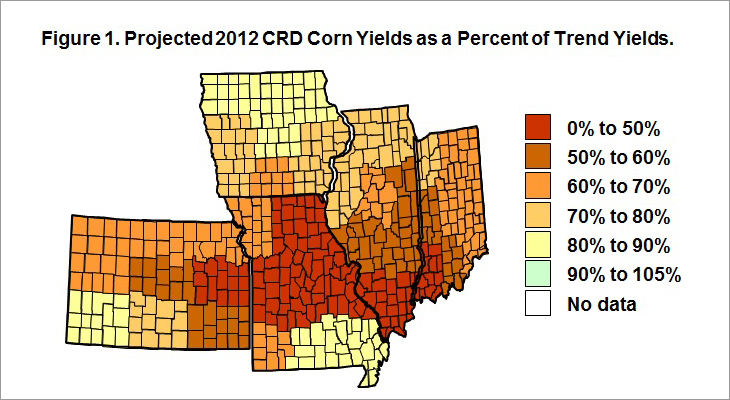 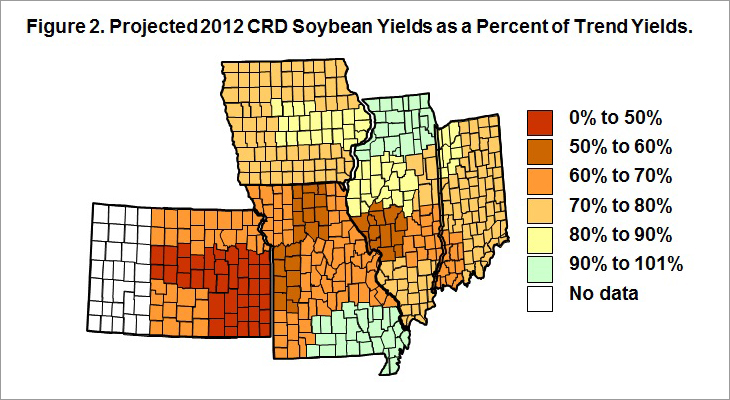 In the states with projected 2012 CRD yields, the 2012 drought has its largest negative impacts on Kansas, Missouri, southern Illinois, and southwest Indiana. In terms of lower yields, the epicenter of the drought appears to have been in Missouri. Yields generally increase the further from this area. In general, corn yields were lower as a percent of trend than soybean yields.