In earlier posts (here and here), we have discussed various topics related to the RFS2 mandates and, more specifically, the Renewable Identification Number (RIN) system used to enforce mandate compliance. Thus far we have focused directly on the market for ethanol RINs and the information their values contain about the short-term impact mandate waivers may have on corn for ethanol use. In this post, we shift focus towards the advanced component of the mandate which corn-based ethanol cannot fulfill. First, we describe the nested structure of the overall mandate and the implied hierarchy of ethanol RIN values. We then use this hierarchy to calculate a rough estimate of the increase in relative corn prices which would be required to make ethanol produced from advanced feedstocks, such as Brazilian sugar-cane ethanol, competitive with corn-based ethanol in meeting the mandates.

Figure 1 illustrates the components of the RFS2 mandate, using the 2012 total mandate level of 15.2 billion gallons. The advanced portion of the total mandate is 2 billion gallons for 2012. The remaining 13.2 billion gallons is the renewable portion, for which corn-based ethanol qualifies. A key clarifying point is that there is no explicit corn-based ethanol mandate. What is often referred to as the corn ethanol mandate is the renewable component, or the difference between the total mandate and that which must be met with advanced biofuels (cellulosic, biodiesel, or other advanced) which achieve at least 50% GHG emissions reductions. 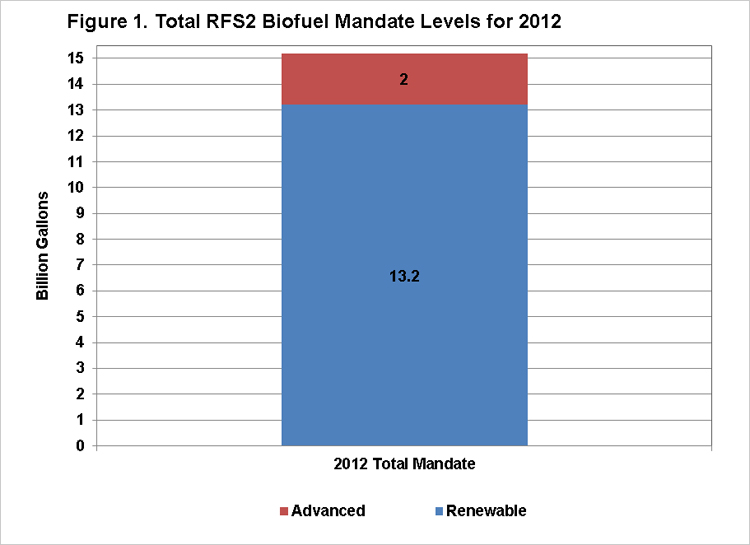 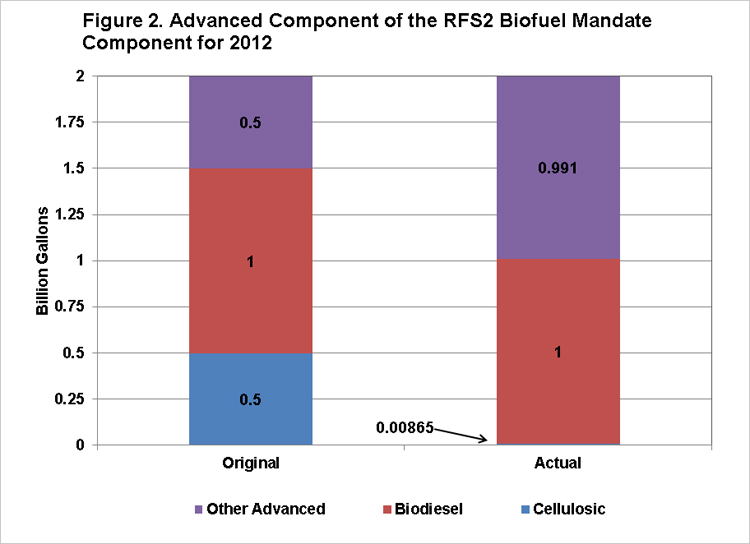 Finally, fuels qualifying for the biodiesel classification can be applied towards the biodiesel, other advanced, or renewable mandate components. Additionally, biodiesel has an ethanol equivalence value of 1.5 meaning that a gallon of biodiesel counts as 1.5 gallons of ethanol towards mandate compliance. For 2012, this means that the 1 billion physical gallons of biodiesel used to comply with the biodiesel component also provides 0.5 billion gallons towards the other advanced component. Given the cellulosic waiver for 2012, this leaves room for roughly 491 million gallons (991 million – 500 million in equivalence credits from the biodiesel mandate) of other advanced biofuels such as ethanol produced from sugar-cane. A more extensive discussion of the nested structure of the biofuel mandates is provided in Thompson and Meyer (2011).

The nested nature of the RFS2 mandates also creates four separate types of Renewable Identification Numbers (RINs) – ethanol, cellulosic, biodiesel, and advanced RINs. The ability to apply only certain RIN types towards various mandate components implies various relationships among RIN classification values. Since any of the advanced component classifications could be used to fulfill the renewable component of the mandate, cellulosic, biodiesel, and advanced RINs should always be valued higher than renewable ethanol RINs. If this weren’t true, an arbitrage opportunity would exist where an obligated party could sell renewable ethanol RINs and purchase an equal volume of advanced RINs for mandate compliance while profiting on the RIN trade. The reverse trade would not work since renewable ethanol RINs cannot be applied towards any of the advanced mandate classifications. 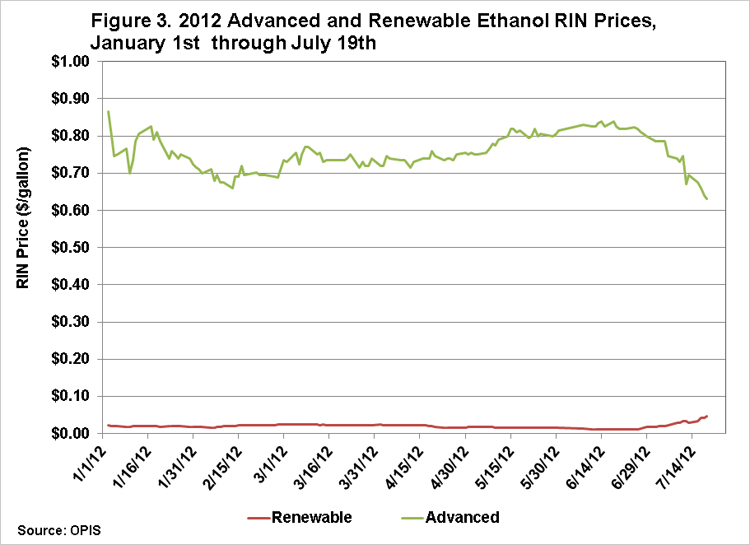 Thus, the size of the gap between ethanol and advanced RINs can provide a rough estimate of the increase in corn prices which would be needed to make ethanol produced from advanced feedstocks an economically attractive alternative. The gap between ethanol and advanced RINs in 2012 is currently between $0.30 and $0.40 per gallon. Using a corn-ethanol conversion factor of 2.8 (gallons per bushel), this translates to a corn price increase of $0.84 to $1.12 per bushel before advanced ethanol sources, such as imported sugar-cane ethanol from Brazil, would be competitive with corn-based ethanol in meeting the renewable component of the mandate.

Compare this with the average gap between 2012 advanced and renewable ethanol RINs through July of around $0.70 per gallon, implying a required corn price increase of almost $2 per bushel before ethanol produced from advanced feedstock could compete with corn-based ethanol. The increase in corn prices resulting from the 2012 drought was one factor in reducing the gap between renewable and advanced ethanol RIN values.

The four biofuel classifications and nested structure of the RFS2 biofuel mandates imply certain relationships among the various types of RINs. Because advanced RINs can be applied toward both the other advanced and renewable mandate components, they should always be valued at or above renewable ethanol RINs. Furthermore, the size of this gap provides an indication of the potential competitiveness of advanced ethanol types with corn-based ethanol in meeting the renewable component of the mandate.

For much of 2012, there was a significant gap – $0.70 per gallon or more – between advanced and renewable ethanol RINs. However, the gap has weakened since July, reaching an average of about $0.35/gallon in mid-September. This implies that, all else equal, current corn prices would need to increase by an additional $1 per gallon to make ethanol produced from advanced feedstocks, such as sugar-cane ethanol from Brazil, a viable blending alternative. This indicates that corn prices could continue to increase significantly before alternative ethanol sources would compete with domestic corn-based ethanol in meeting the renewable portion of the RFS2 biofuel mandate. However, similar to our recent post on ethanol RIN values and the potential impact of a mandate waiver on corn prices, this estimate is based on simple “back of the envelope” calculation which assumes all other factors are held constant.