Today’s post provides an update on U.S. ethanol production and imports through August, and projections for 2012 ending Renewable Identification Number (RIN) stocks. Prior analyses of the available stock of RINs accumulated over the past three years through the RFS2’s banking provision are available here and here. These previous estimates indicated an ending stock level for 2011 of approximately 2.64 billion gallon RINs which could be used for mandate compliance in 2012 as an alternative to physical blending, providing up to 960 million bushels of flexibility in revealed demand for corn-for-ethanol if ethanol blending margins declined. Ethanol production and exports through the first quarter of 2012, and the expectation for a slowing in ethanol production due to the drought’s impact on corn prices, suggested the likely use of a portion of available RIN stocks for mandate compliance in 2012 and a lower carry in to 2013.

Furthermore, the small 2012 corn crop and resulting potential for binding mandate conditions continue to be reflected in the ethanol RINs market. Daily settlement prices for the December 2012 corn futures contract are provided in Figure 1 (red series, values on the right axis). The harvest futures declined steadily throughout the spring as good weather and an early planting season resulted in expectations for a record corn crop. Ethanol RIN values also steadily declined through the first six months of the year, reaching a low of $0.01/gallon in mid-June. With drought conditions taking hold in mid-June, there was a significant increase in corn prices as production expectations declined. December corn prices peaked at over $8.00/bushel in August, and have traded in the $7 to $7.70 range over the past two months. Similarly, 2012 RIN prices increased significantly throughout July, reaching a high price of $0.0465/gallon, and have continued to trade above early season levels through October. 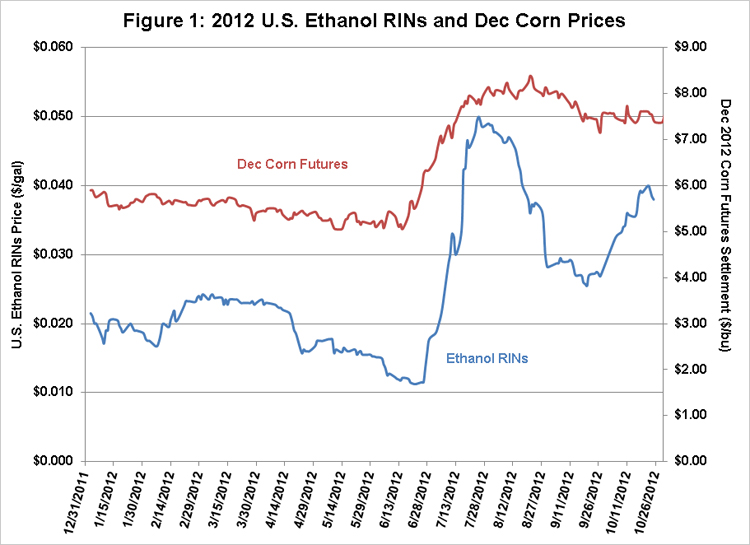 The 2012 drought led to significant increases in corn prices and a slowing in domestic ethanol production and exports. For the first time since the RIN system was established, it is estimated that 2012 net RIN generation will not exceed the non-advanced ethanol mandate, and RIN stocks carried over from previous years will be used for mandate compliance. This was reflected in 2012 ethanol RIN prices, and illustrates how the design of the system can be used by obligated parties to respond to variability in the economics of ethanol blending. Current estimates indicate continued flexibility for corn-for-ethanol demand to meet the 2013 non-advanced mandate, but at lower levels than in previous years due to estimated stock use in meeting the 2012 mandate.