Minimum volumes of biofuel usage were first mandated for the U.S. in the 2005 Energy Policy Act and then revised in the Energy Independence and Security Act of 2007. The current legislation sets annual minimum volumes through 2022 in four categories of biofuels: cellulosic, biomass-based diesel, undifferentiated advanced, and renewable. There is a hierarchy among these different categories based on their life-cycle contribution to reducing “green house” gas (GHG) emissions. Most people are surprised to learn that there is not an explicit mandate for corn-based ethanol. Instead, corn-based ethanol has been the cheapest alternative to date for fulfilling the renewable component of the mandates.

As events this summer have highlighted, there is a raging debate about the impact of the RFS mandates on grain and oilseed markets. Many have argued that ethanol production and blending is motivated only by the RFS and that a lower mandate would result in less ethanol production and blending and less corn consumption in that sector. In an effort to provide some relief to other consumption sectors due to the drought-related drop in corn production in 2012, several state governors filed a request for the U.S. Environmental Protection Agency (EPA) to impose a partial or full waiver of the RFS for 2013. While the logic of this request seems straightforward, the structure of the demand and supply functions in the ethanol sector indicates that waiving the mandate would have at most limited impact on the amount of corn used in ethanol production in 2013. The main reason is that the increasing amounts of ethanol supplies since 2006 have resulted in a fundamental shift in gasoline formulation. A simplified description of the change is that the refining industry has moved to using predominantly 84 octane “conventional” gasoline that is then blended with the higher octane ethanol (around 113) to produce the 87 octane gasoline that is most popular at the retail level in the U.S. With this change, so long as the price of ethanol is below the price of wholesale gasoline there is no market incentive for gasoline blenders to reduce their use of ethanol. The EPA agreed with this logic in their recent denial of the requests to waive the mandate.

The future outlook for continued growth in corn-based ethanol use is clouded by several factors, including the 10% blend wall, slow implementation of higher blends, declining total gasoline demand, and ethanol imports from Brazil. One might be tempted to conclude that the biofuels-fueled boom in crop prices is coming to an end as corn consumption for ethanol levels out and corn production begins to catch up. Instead, it is possible that the new era of higher crop prices could be extended well into the future as a result of the RFS for advanced biofuels that in all likelihood can only be met with a rapid expansion in biodiesel production. The new price era, then, would not be extended by rising corn demand, but by rising vegetable oil demand. Whether this scenario actually is realized depends crucially on the evolution of biofuels policy here in the U.S. and energy policies in Brazil. 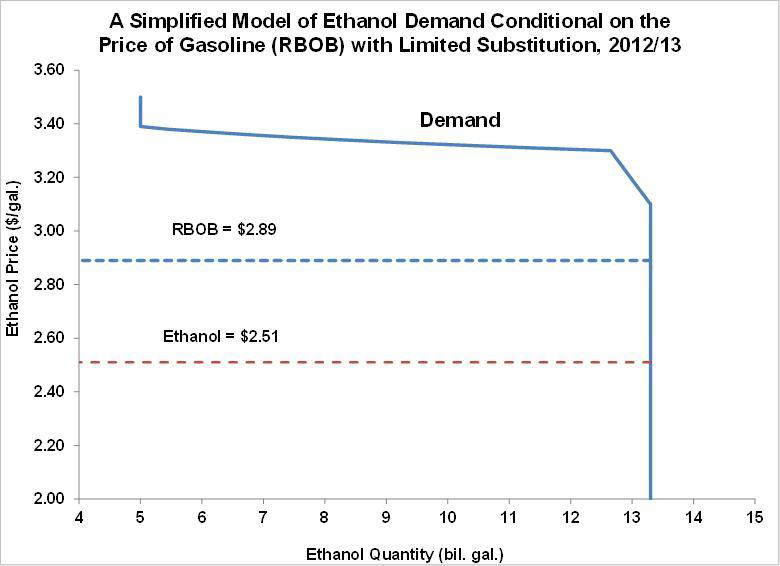