The USDA collects a large amount of information directly from farmers and ranchers across the United States. Farmers and ranchers own the majority of the land dedicated to the production of agricultural products, yet a significant portion of our nation’s farmland is rented or leased from non-operating landlords. In 2010, the USDA collected detailed information on land tenure, ownership patterns, and rental agreements through supplemental questions in the Agricultural Resource Management Survey. The goal was to provide more detailed information on land rental agreements and address important questions about landlord characteristics.

The annual Agricultural Resource and Management Survey (ARMS) is the USDA’s primary source of information on the status of farm finances, production practices, and resource use, as well as the wellbeing of America’s farm households. The survey is sponsored jointly by the Economic Research Service (ERS) and the National Agricultural Statistics Service (NASS). It is the only national survey that annually provides observations of field-level farm practices, the economics of the farm operating the field, and the characteristics of farm operators and their households. Farm operations are the primary sampling unit and include all establishments that sold, or normally would have sold, at least $1,000 of agricultural products during the year. More information on the survey is available here.

The majority of US farm and ranch land is owner-operated

In contrast, only 41% of farmland acreage in Illinois is owner-operated. This is roughly the same amount of land that is rented under fixed or flexible cash agreement at 40%. In addition, share rental agreements account for a larger portion of Illinois farmland acreage (18%) than for United States as a whole (7%). 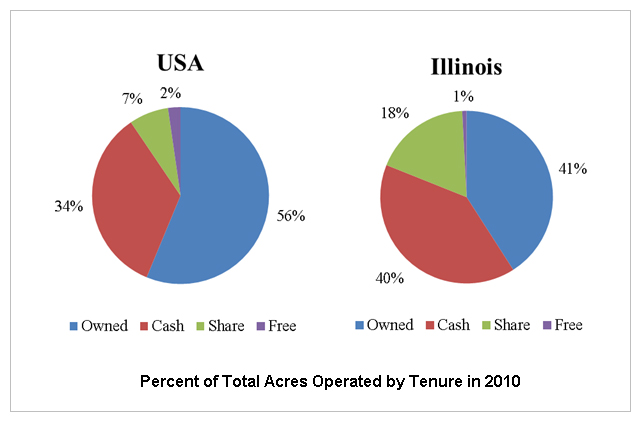 Although the majority of agricultural lands in the United States are owner-operated, the proportion of land rented in varies substantially across farms. The 2010 ARMS survey suggests that smaller farmers own a larger share of the land they operate. The Economic Research Service (ERS) Combined Farm Typology classifies farm operations in three groups by the primary occupation of the principle operator and farm sales.

Rural residence farms across the US and in Illinois own a very large portion of the acres they operate, at 75% and 86% respectively. However, larger farms rent in a majority of their acreage. For example, in Illinois 74% of acres operated by commercial farms are rented.

The views expressed are those of the authors and should not be attributed to ERS or USDA.