Group Risk Income Plan with the Harvest Revenue Option (GRIP-HR) has features that make it an attractive crop insurance product this year. GRIP-HR will make large payments in a drought year, a concern of many farmers as dryness extends across much of the western corn-belt and Great Plains. GRIP-HR also will make large payments if prices decline, a distinct possibility given large projected plantings of corn. Large planting, combined with normal yields, would lead to large supplies and potentially large price declines. Under the price decline scenario, GRIP-HR will make larger payments than Revenue Protection (RP), the most popular crop insurance product. Herein, payments of GRIP-HR and RP are compared under different yield and price scenarios.

RP and GRIP-HR payments are generated for a Macon County farm using a $5.80 projected price, close to the closing prices of Chicago Mercantile Exchange contracts during the first half of February. The farm has a 188 bushel Trend Adjusted Actual Projection History (TA APH) yield. The expected yield for GRIP-HR is 182.8 bushels per acre.

Payments are generated under three yield scenarios representing outcomes that have occurred between 1975 through 2012 (see the February 5, 2013 farmdocDaily post entitled “Low Crop Revenue Most Likely Due to Lower Prices” for more detail here). These scenarios are: 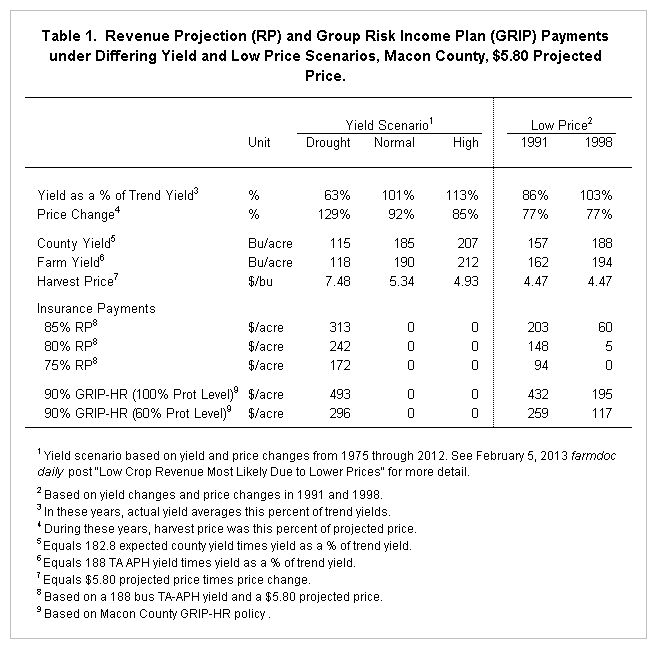 In addition, payments are generated under two low price years. In both 1991 and 1998, the harvest price is 77% of the projected price. Yield is 86% of trend yield in 1991 and 103% in 1998. In both years, the harvest price is estimated at $4.47 per bushel. Yields in the 1991 scenario are below expected yield (county yield is 157 bushels per acre and farm yield is 162 bushels per acre) while the 1998 scenario has near normal yields (county yield is 188 bushel per acre and farm yield is 194 bushel per acre). The year 1998 is significant in that it began a series of low price years, leading to low farm incomes and large government payments.

Neither RP nor GRIP-HR makes payments in the normal and high yield scenarios.

GRIP-HR is a county level product that does not have replant or prevented planting provisions. County yields are not perfectly correlated with farm yields; hence, it is possible to have a low farm yields and the county yield does not generate an insurance payment. GRIP-HR makes payments in the year after crop is harvested. For example, GRIP-HR has not made payments for the 2012 year because 2012 county yields have not been released by U.S.D.A.

GRIP-HR has a number of attractive features given the wide outcomes that can occur in 2013. GRIP-HR will still provide protection in drought years. There is a perception, not supported by historical evidence, that there is a higher probability of drought in 2013, leading to the desire for drought protection.

While drought protection may be desired, the feature of providing better price protection than RP makes GRIP-HR attractive this year. Large plantings of corn and near normal yields across the corn-belt could result in lower prices. This period of lower prices could last several years, given that yields are near normal around the world.

While GRIP-HR has a number of attractive features, it does have higher premium costs than RP. RP will provide excellent overall revenue protection, with the caveat that GRIP-HR will make larger payments in price decline years. If RP is used, taking a high coverage level seems advisable.