In yesterday’s post, we evaluated the average farm price and distribution of monthly farm prices of corn, soybeans, and wheat in Illinois since December 2006 relative to much earlier projections for the new era of prices that began in late 2006. Today we will use the actual Illinois monthly average prices of corn, soybeans, and wheat for December 2006 through December 2012 to evaluate whether the original projections of average prices and price distributions in the new era need any modifications. We will also use the new era projections to evaluate the current level of prices in these markets and draw implications for marketing 2012 and 2013 crops. But first it is useful to briefly review yesterday’s post.

In yesterday’s post we found that prices for the period December 2006 through December 2012 differed from early projections in the following ways:

The results of the 5-year review of prices represent an opportunity to alter the early projections. For both corn and wheat, average prices have been close enough to the projected prices that no changes are being made for expectations during the new price era. For soybeans, the early projection of average price was based on an expected soybean-to-corn price ratio of 2.3 to 1. Based on average prices during the past 5 years, the expected ratio is increased to 2.4 to 1, resulting in a projected average of $11.04, $0.46 above the previous projection. While the distributions of average monthly prices have differed from the projected distributions, the expected distributions are not being altered from the early projections. The two previous price eras lasted 26 and 34 years, respectively. If the current era persists for 25 or 30 years, 5 years of price observations is probably not sufficient to alter the expected distribution of prices. Current projections of the average farm price and the distribution of average monthly farm prices of corn, soybeans, and wheat in Illinois are presented in Figures 1, 2, and 3. 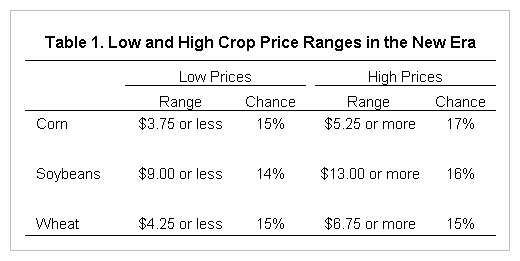 Also indicated in Figures 1, 2, and 3 are the current (February 27) average old crop (spot) and new crop (harvest) cash prices at country elevators in Illinois. The cash prices represent the mid-point of bids at central Illinois locations for corn and soybeans and at west southwest Illinois locations for wheat as reported by USDA’s Agricultural Marketing Service. For all three crops, current old crop bids are in the upper end of the price distribution expected in the new era. The relatively high prices reflect the on-going impact of the small U.S. corn and soybean crops, the small South American soybean crop, and the small foreign wheat crop in 2012. While prices of all three crops are well off the highs reached in August/September 2012, they represent “high” prices based on the expected distribution of prices over a longer period of time. As such, these prices still offer attractive pricing opportunities, particularly if U.S. and world crop production rebound in 2013 as expected. 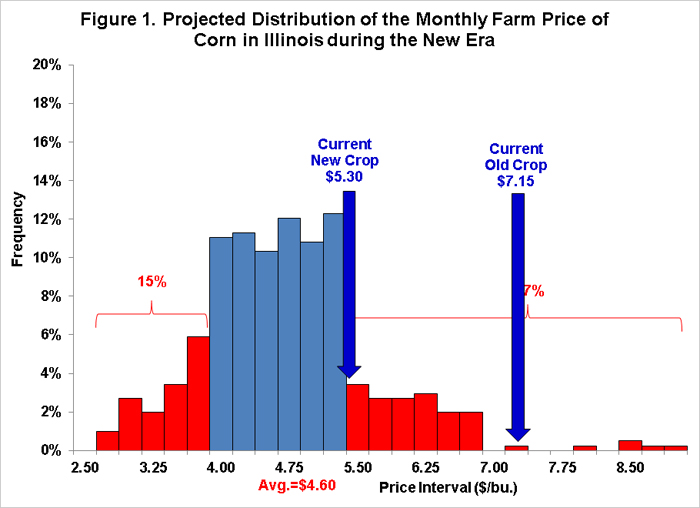 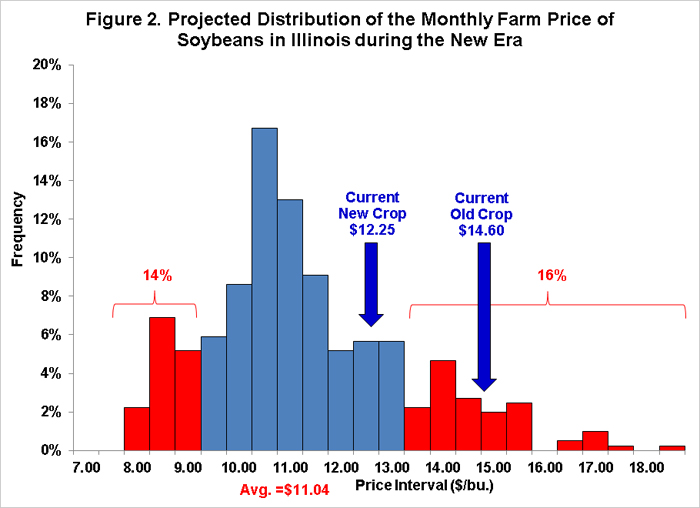 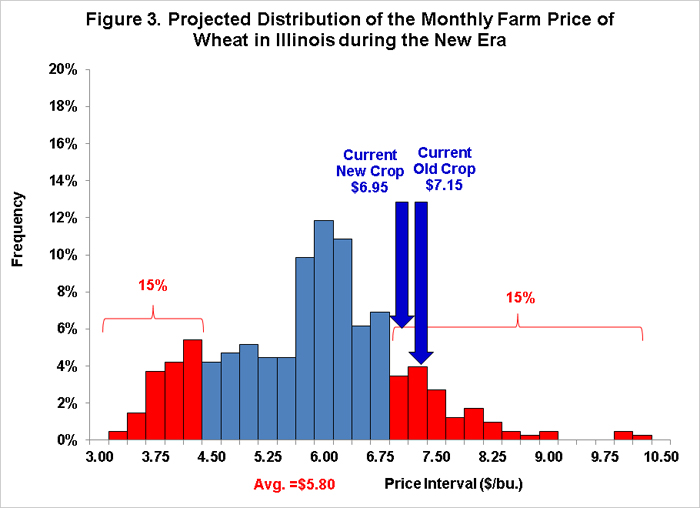 Current harvest bids for all three crops are well below old crop bids, particularly for corn and soybeans, but well above the expected long term averages. Bids are near the upper end of the range of prices expected about 70 percent of the time in this new era. Lower bids relative to old crop prices reflect the expectation that U.S. and world supplies of all three crops will be more abundant in 2013. Prices are being supported above expected long term averages because of some degree of production risk, particularly for U.S. crops. Prices do not yet reflect a full rebound in production. The relatively high new crop prices appear to represent attractive forward pricing opportunities. For wheat producers with crops in good condition, forward pricing 20 to 25 percent of expected production would not be unreasonable. For corn and soybean producers, forward pricing decisions may be influenced by plans for crop revenue insurance. The projected price for crop revenue insurance will likely be slightly higher than current harvest bids for both crops. As a result, revenue on a large portion of production is insured at or above today’s prices, mitigating much of the risk from lower prices. Still, crop revenue insurance products cover less than 100 percent of expected production so that forward pricing some portion of the crop (depending on insurance coverage) may be prudent.