Yield losses from the 2012 drought caused large crop insurance payments. In this post, 2012 loss ratios are shown for U.S. counties, thereby allowing areas of high loss experience to be identified. Higher loss ratios occurred in eastern Kansas, Missouri, central and southern Illinois, western Indiana, and western Kentucky. This area corresponds to the area where corn yield losses were most pronounced (see here and here). The areas of high losses in 2012 bear little relationship to typical losses across the United States. 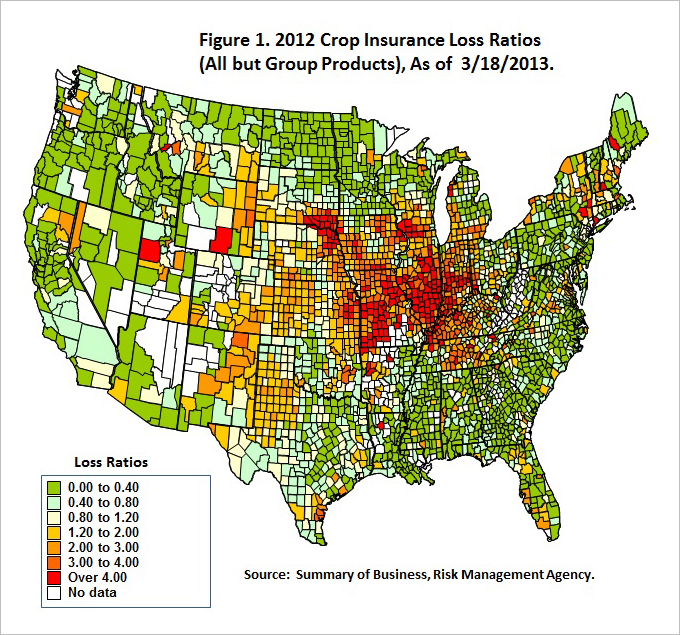 As can be seen in Figure 1, many counties in eastern Kansas, Missouri, central and southern Illinois, western Indiana, and western Kentucky had loss ratios above 4.0. Hot, dry weather during the summer caused these areas to have large yield losses. This appears to be the center of the drought impacting the Midwest. Other areas that had loss ratios above 4.00 include 1) an area centered around northeast Nebraska and southeast South Dakota, 2) parts of southern and southwest Iowa, and 3) parts of southern Wisconsin, northwest Illinois, and east-central Iowa.

There also were areas that had less severe losses, as judged by loss ratios between 1.20 and 4.00. These areas include western Texas, southern Kansas, eastern Colorado, western Nebraska, and eastern Wyoming and Montana.

There were areas were loss ratios were low. Minnesota, North Dakota, and northern South Dakota had loss ratios that were below .4, indicating low loss experience. In addition, many southern states had low loss ratios.

The 2012 loss ratio experience differed from typical loss ratio experiences. Loss ratios from 1995 through 2011 are shown in Figure 2. As can be seen in Figure 2, much of Illinois and Iowa had loss ratio below .8, with a significant number of counties having loss ratios below .4. These areas, particularly Illinois, had large losses in 2012. In addition, some areas typically have higher losses that did not have large losses in 2012. These areas include the North Dakota and the southern states. 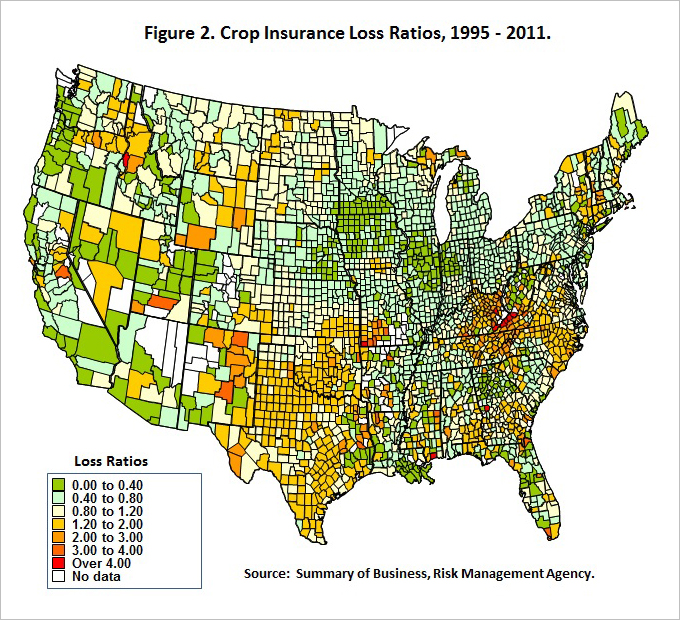 In terms of loss experience, the 2012 drought was most severe in eastern Kansas, Missouri, southern and central Illinois, western Indiana, and southern Kentucky. The loss ratios in these areas were high in 2012, untypical for these regions. Other regions had low loss ratios in 2012 while those areas have typically higher loss ratios.