Relative corn and soybean prices over the past few crop years have encouraged expansion of corn acreage and the use of more corn intensive rotations throughout much of the Midwest. In general, and in central and northern Illinois in particular, increased corn acreage has come at the expense of fewer acres being planted to soybeans and, to a lesser extent, wheat.

This post examines whether this shift in crop rotations has led to increased returns for grain farms in Illinois. The figures are based on data provided by the Illinois Farm Business Farm Management Association (IL FBFM), and includes grain operations with at least 200 tillable acres located in the Northwest, Northeast, West, East, and Central crop reporting districts. 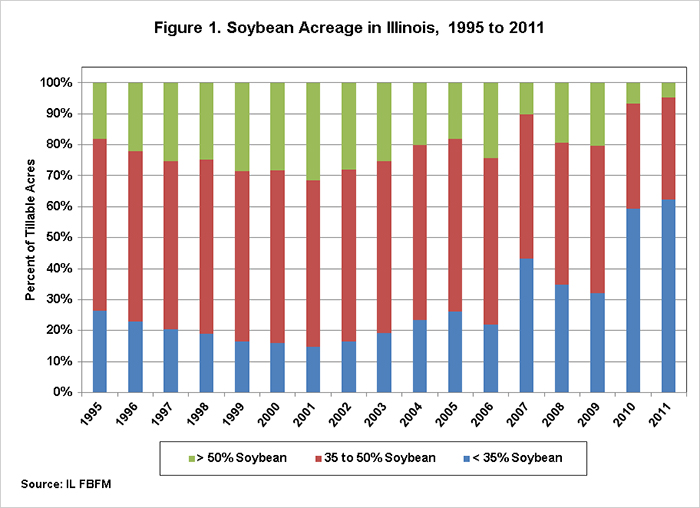 Relative prices and crop budgets have suggested that expected returns are greater for more intensive corn rotations. However, have these larger expected returns been realized on operations planting fewer soybeans? Figure 2 provides a scatterplot of the average management returns ($/acre) against the percent acres planted to corn for IL FBFM grain operations, averaged over the 5-year period from 2007 to 2011. Each data point in the plot represents the 5-year average return (on the vertical axis) plotted against the average percentage of acres planted to corn (on the horizontal axis) over the same time period on a specific grain operation in IL. Very high and very low returns are earned both at low and high levels of corn acreage, and the scatterplot does not indicate that increased corn acreage has been associated with higher (or lower) returns. The black line in the figure is a simple linear trend line fit to the data, and supports what can be seen visually from the scatterplot. The trend line does not have a positive (or negative) slope, meaning that there is not a statistical relationship between average corn acreage and returns over this 5-year time period. 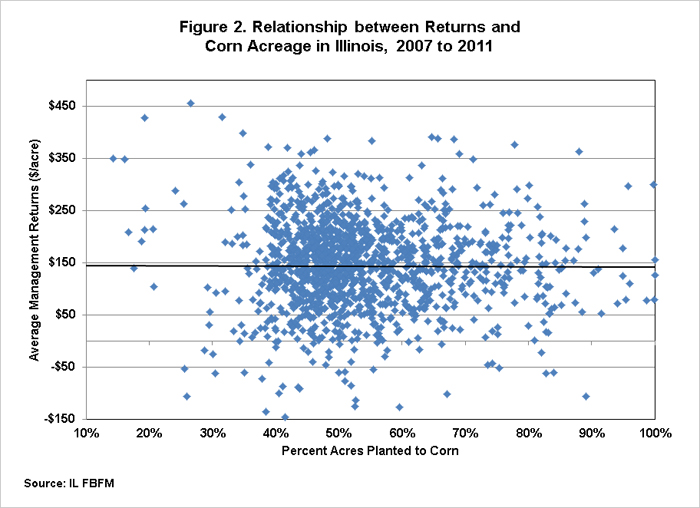 If relative prices have suggested greater profitability for corn over soybeans, why hasn’t this necessarily been realized in actual returns? A number of factors are likely responsible. Anecdotal evidence from various regions of Illinois indicates that yield drags for corn following corn have been significant in the past few crop years. Production costs for corn are also greater due to higher costs for seed, fertility, and power and machinery. Both of these factors contribute to equalizing returns across rotational choices, despite higher relative corn prices.