In our farmdoc daily post on February 13 of this year, we traced through the implications of implementing RFS2 as currently quantified through 2015. We made the following qualifying assumptions in that analysis:

That analysis resulted in the following conclusions:

We found these outcomes problematic for two reasons. First, the capacity to produce the required level of biomass-based biodiesel beyond 2014 does not currently exist. Second, the feedstock requirements for biomass-based biodiesel production in 2014 and 2015 would overwhelm those markets. These issues stem primarily from the assumed very slow expansion in the size of the domestic ethanol blend wall. Ethanol consumption is being limited by a lack of growth in domestic motor fuel consumption and slow growth in the consumption of E15 and E85. The ethanol blend wall results in larger quantities of advanced biofuels to meet the total RFS. These blend wall constraints have now been expressed in the form of rapidly increasing D6 RINs prices since the first of the year. These issues become even more problematic beyond 2015.

Tables 1 through 7 are similar to the tables included in our previous analysis and trace through the implications of this proposal, with one change in the assumptions compared to our previous analysis. Due to the re-instatement of the biodiesel tax credit of $1 per gallon (and assuming the tax credit is extended to 2014 and 2015), the analysis here assumes that imported Brazilian sugarcane ethanol will have an economic disadvantage to biomass-based biodiesel in meeting the undifferentiated advanced biofuels requirements. As a result, annual ethanol imports are assumed to be 200 million gallons rather than 500 million gallons assumed in the previous analysis. 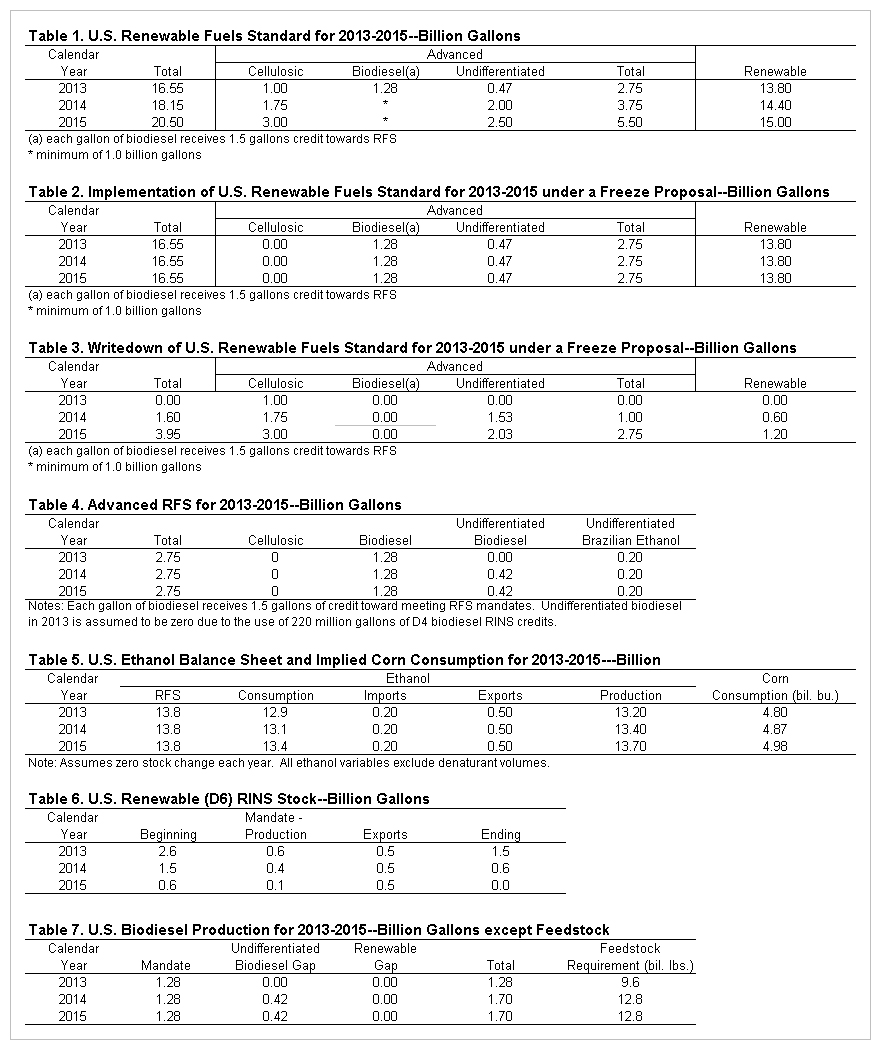 There are several critical assumptions in this analysis that could impact the conclusions. Three assumptions are particularly important. First, if the biodiesel tax credit is not extended to 2014 and 2015 Brazilian ethanol would likely be more competitive with biomass-based biodiesel in meeting the advanced biofuels mandate so that imports would be larger than assumed here. Larger imports would in turn reduce domestic ethanol production and consumption under the blend wall assumption and therefore reduce the amount of corn used to produce ethanol. There would likely be minimal impact on biomass-based biodiesel production and consumption since larger quantities would be required to replace domestic ethanol pushed out by imported ethanol. Second, this analysis assumes that only biomass-based biodiesel and Brazilian ethanol are available to meet the advanced biofuels requirements. In fact, small quantities of other biofuels are available and could reduce the production of biomass-based biodiesel from the levels assumed here. EPA, for example, projects that consumption of other advanced biofuels could reach 150 million gallons in 2013. Third, the assumption about the size of the domestic ethanol blend wall is important in determining the amount of RINs stocks needed to meet the RFS2. Based on the current slow pace of implementation of E15 and the non-competitive pricing of E85 the growth assumption used here may be too optimistic. A smaller blend wall would require a faster pace of RINs use or slightly larger production and consumption of biomass-based biodiesel in 2014 and 2015 to meet the renewable fuels mandate gap.

We believe our proposal to freeze RFS2 mandates in 2014 and 2015 at 2013 levels represents a pragmatic way forward. It is realistic in that it would not force large scale adoption of E15, E85, or biodiesel. This is particularly important since it is by no means clear whether the infrastructure investments necessary for widespread E15 or E85 adoption could actually be made in this time frame. There is also uncertainty whether sufficient biodiesel production capacity would be available. However, the proposal does provides incentive for modest growth in E15 and/or E85 penetration by keeping the mandate for renewable fuels above the current E10 blend wall. Even with relatively slow growth in domestic ethanol production through 2015, the proposal would maintain a high rate of use of ethanol production capacity and would provide for modest growth in the large demand base for corn. An increasing percentage of the domestic biodiesel capacity would be utilized without straining that capacity. Similarly, requirements for biodiesel feedstock would grow, but the growth would not overwhelm those markets. Obligated parties in the motor fuel supply chain could more easily meet their blending obligations with a combination of physical blending and use of RINs stocks. Finally, implementation of the proposal would also likely reduce the price of D6 ethanol RINs and eliminate the differential impact of those high prices on obligated parties. The key for the success of the proposal is that regulators, legislators, and industry participants use the next two years to develop a mutually agreeable biofuels policy beyond 2015.