The Renewable Identification Number (RIN) market has been a hot topic over the past few months (examples here and here) as prices for Renewable Ethanol (D6) RINs soared from $0.05 to over $1.00 per gallon in early March. As noted in a recent post (here) from Scott Irwin and Darrel Good, the rapid price increase can be linked to the impending collision of the Renewable Fuel Standard (RFS) mandates and the ethanol blend wall which, without rapid expansion of the E15 or E85 markets, will likely require the use of accumulated RIN stocks for mandate compliance in 2013 and 2014.

As part of their decision to deny mandate waiver requests last year, the EPA included an estimate of 2.6 billion available RINs which could be “rolled” into 2013 for use in mandate compliance, potentially reducing the requirements for the physical blending (and production) of biofuels implied by the RFS mandates. A report recently released by Goldman Sachs suggested that actual RIN availability was much lower at just 2.1 billion gallons. An ethanol market update released earlier this week from the Oil Price Information Service (OPIS) linked this lower stock estimate to a jump in RIN prices from $0.75 to more than $0.80/gallon (a copy of the OPIS update can be found here). This Bloomberg article also cites the lower stock estimate, noting concerns over RIN market volatility and the impact of higher RIN prices on gasoline prices. A further update from OPIS then attributed difference between EPA and Goldman Sachs estimates to confusion over which of the various D-codes were included in each of the carryover numbers.

This week’s continued RIN market controversy emphasizes its complexity as well as the critical need for a better understanding of the various categories of RINs. The EPA Moderated Transaction System (EMTS) tracks the creation and use of the various RIN categories, providing updated data summaries on a monthly basis. Table 1 below is based on the EMTS snapshot as of March 7, 2013 (accessed on April 12, 2013), and summarizes 2012 RIN availability for the biomass-based biodiesel (D4), advanced biofuel (D5), and renewable fuel (D6) mandate categories. Potentially available, or carryover, RINs from 2012 into 2013 are approximately 301 million D4 gallons, 154 million D5 gallons, and 2,053 million D6 gallons – for a total of just over 2.5 billion gallons across all three of the D-code categories. 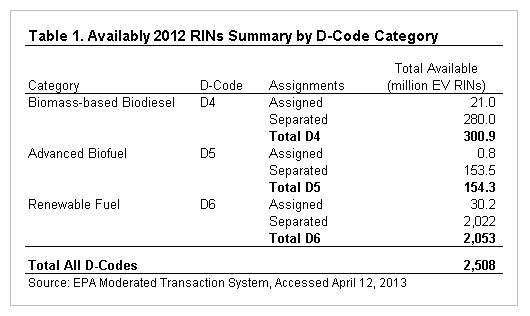 Thus, the available RIN numbers reported in table 1 suggest just over 2.5 billion gallons of RIN carryover which would be eligible for use in compliance with the 13.8 billion gallon renewable component of the overall RFS mandate in 2013. Alternatively, all or a portion of the available D4 and D5 RINs could be applied towards the advanced component, leaving as few as 2.05 billion D6 RINs available for application to the renewable component. These are key distinctions across the D-code categories, and have significant implications for various issues related to RFS mandate compliance in 2013 and future years.

The significant increase in prices experienced over the first quarter of 2013 has heightened interest in the RIN market. As estimates of RIN availability are released from various sources, confusion remains over how to interpret and compare these estimates and their ultimate impact on RIN values and trading. Given the nested structure of the RFS mandates and the ways in which RINs generated from the various biofuel categories can be used for mandate compliance, exactly what is included in a given RIN stock estimate should be carefully considered.