The dramatic run-up in ethanol (D6) RINs prices has been discussed in several of our recent posts here at farmdoc daily (here, here, and here). It was argued that the underlying reason for the increased value of D6 RINs lies in the impending collision of the blend wall for E10 and the rising renewable (ethanol) mandate under the U.S. Renewable Fuel Standard (RFS). This situation results in the prospect for a sharp draw down in D6 RIN stocks in 2013 and 2014 as physical blending of ethanol, due to the blend wall, falls further and further behind the mandate levels. Not everyone agrees with this assessment. Most prominently, Senator Grassley from Iowa attributed the run-up to the actions of speculators. In a March 27th interview he said he had, “just one word – speculation,” when reporters asked about the price run-up. He also stated, “That’s quite a rise (in prices). It doesn’t seem to me that’s the marketplace,” and suggested that U.S. Commodity Futures Trading Commission (CFTC) should investigate.

The purpose of this post is to present a more detailed analysis of the fundamental factors driving the RIN price explosion. In particular, is there a rational value of D6 RINs prices given present and likely conditions in the future? And if a rational value is available, what does that value imply about speculative influences? We begin by reviewing the basic economic impact of a quantity mandate. A similar analysis was presented in an earlier farmdoc daily post by Seth Meyer and Nick Paulson. Figure 1 shows a standard supply and demand diagram applied to the ethanol market. The “free market” equilibrium is given by the point where the supply and demand curves intersect. In this case, the ethanol mandate is set to the left of the market equilibrium quantity and is therefore considered “non-binding.” That is, the mandate does not have a market impact because the equilibrium quantity (Q) is greater than the mandate (QM). In contrast, Figure 2 shows a “binding” mandate where the mandated quantity is above the market equilibrium quantity. In order to get this higher than equilibrium quantity produced, ethanol producers must be paid a price that is higher (Ps) than the market equilibrium price (P). Likewise, ethanol consumers will only consume this higher quantity at a price lower (Pd) than the market equilibrium price (P*). From the perspective of a gasoline blender, there is now a wedge between the price they pay ethanol producers and the price they charge consumers for the same ethanol. This wedge, or loss, is exactly equal to the price of a RIN. In this framework, blenders are indifferent to physical blending of ethanol with gasoline at a loss of Ps minus Pd per gallon of ethanol or paying the same value for a RIN in the secondary market. 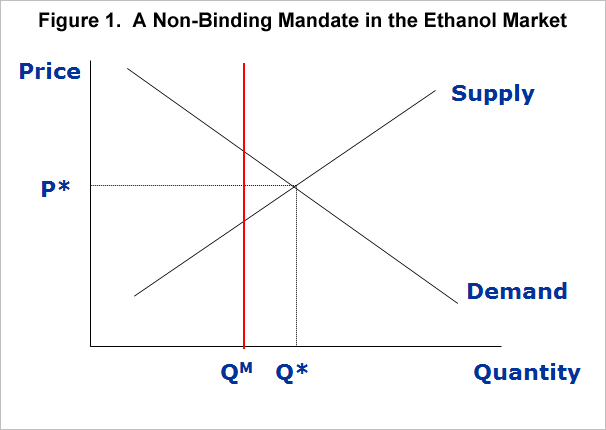 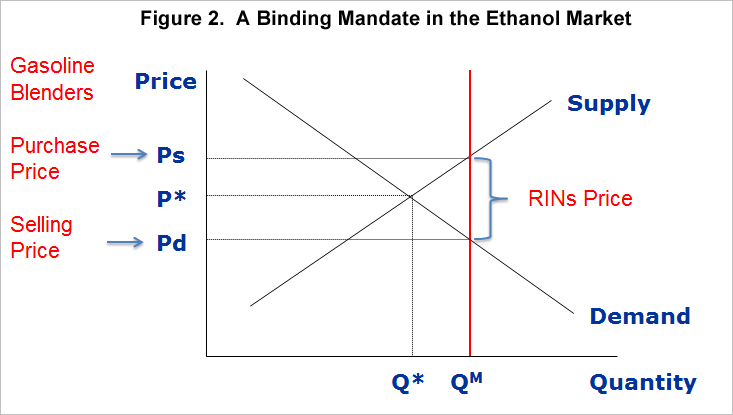 The conceptual framework outlined above provides a guide for constructing a price-based measure of whether the RFS renewable (ethanol) mandate has or has not been binding since it was instituted. Specifically, if blending margins for ethanol are positive then the mandate is not binding and vice versa. The conventional approach to E10 blending margins is to compare ethanol and CBOB (or RBOB) gasoline prices. We focus here on CBOB prices because this is the feedstock for about two-thirds of the finished gasoline used in the U.S. Positive ethanol blending margins in this approach result from ethanol prices that are below the price of CBOB gasoline and vice versa. This type of analysis assumes that E10 does not have to be priced at a discount to reflect the lower fuel efficiency of ethanol since ethanol is such a small portion of the blend and the loss of efficiency is not easily discernible by the consumer. The computation can be further refined by recognizing that ethanol is not only a gasoline extender but also can be used to enhance the octane rating of gasoline. For example, an analysis by the U.S. Department of Energy in November 2012 calculated a “break-even price of ethanol, above which it is more economic for the refiner to reduce ethanol volumes and alternatively produce more octane within the refinery.” The analysis indicates that the breakeven ethanol price is about 10 percent higher than the price of CBOB gasoline. That is, if the price of ethanol is less than 110 percent of the price of CBOB gasoline, there are positive economic returns to blending E10 for octane enhancement rather than producing more octane from other petroleum processes in the refinery.

Figure 3 shows the ratio of wholesale ethanol and CBOB prices at Chicago over the period January 25, 2007 through April 18, 2013. It is clear that this measure of the ethanol blending margin has been positive all but a small amount of time since 2007, and consequently, the renewable mandate of the RFS has been non-binding most of the time since 2007. Figure 3 also shows the price of D6 ethanol RINs since quotes first became available from OPIS in March 2008. If the blending margin is computed accurately, the model presented in Figure 2 predicts that the RIN price should be positive when the blending margin exceeds 110% and zero otherwise. This is largely the story from 2008 through 2012. RINs prices rose in late 2008 and 2009 as the ratio of ethanol prices to CBOB prices exceeded 110%, but then declined to only a few cents for the remainder of the period through 2012 when ethanol prices rarely reached the level of CBOB prices. From this perspective, the incredible run-up in RINs prices during early 2013 could be viewed suspiciously. After all, ethanol blending margins have stayed positive right up to the present time. 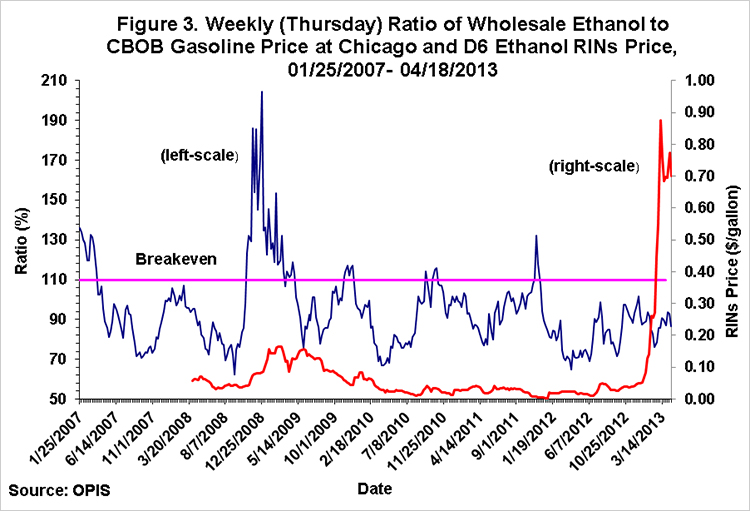 In order to understand the run-up in ethanol RINs prices we therefore need to dig a little deeper. The key is to modify the representation of the demand curve for ethanol presented in Figure 2. This is done in Figure 4, which is a slightly modified version of the ethanol demand model we first presented last August in this post. The model has a vertical (perfectly inelastic) segment at 5 billion gallons in order to represent the demand for ethanol as an MTBE oxygenate replacement. It is vertical since non-ethanol alternatives are prohibitively expensive. The demand curve then becomes flat (perfectly elastic) for ethanol prices equal to 110% of CBOB prices between 5 and 13 billion gallons. This is the same breakeven assumption shown in Figure 3. The demand curve becomes vertical again to reflect the E10 blendwall, which is assumed here to be 13 billion gallons. This change to the demand curve is the key to all that follows. 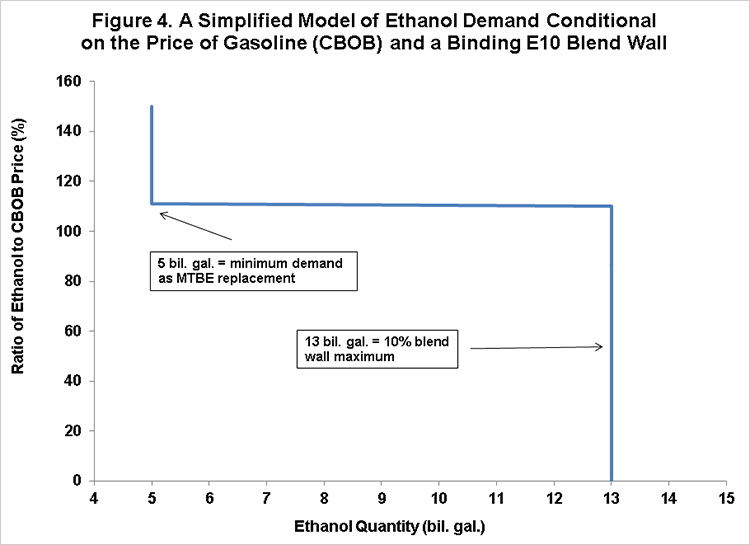 Figure 5 now adds a hypothetical supply curve and vertical lines representing the renewable RFS mandate for 2011 (12.6 billion gallons) and 2013 (13.8 billion gallons). The 2011 RFS mandate does not cause any problems, even though the equilibrium quantity is stuck at the 10% blendwall, because the mandate is less than the blendwall. An entirely different situation is presented in 2013. Now the RFS mandate exceeds the 10% blendwall quantity of 13 billion gallons. If a stock of D6 or higher-nested RINs is not available to fill in the gap between 13 and 13.8 billion gallons there is no feasible market equilibrium since the RFS requires more gallons to be blended in the motor gasoline pool than is physically possible. 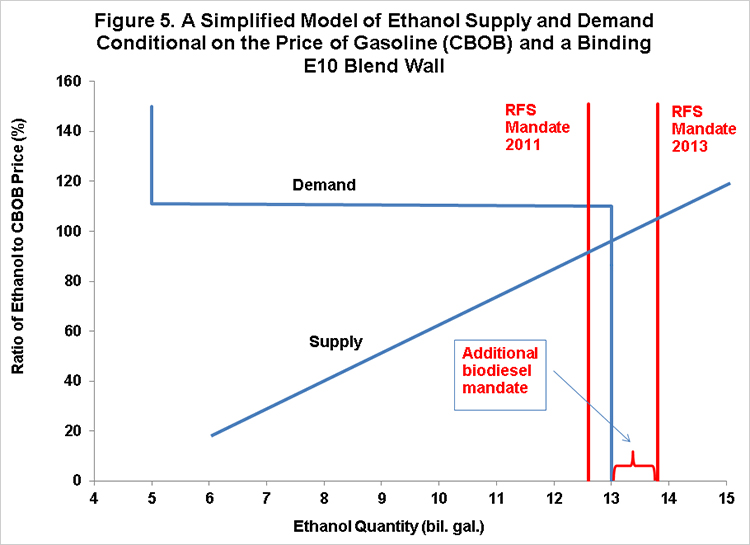 Fortunately, the RFS does have some flexibility built into it, in that it is possible to accumulate RINs stocks and higher nested RINs can be used to meet lower-nested mandates if no stocks of RINs are available for the lower-nested category. If we assume that the stock of D6 ethanol RINs is zero, then compliance for the wedge between 13 and 13.8 billion gallons will simply be transferred to the next higher nested non-ethanol category of the RFS. At the present time biodiesel is the only higher nested non-ethanol type of biofuel that is potentially available in large quantities. So, in this framework the 800 million gallons of the renewable mandate above the E10 blendwall are effectively converted into an additional biodiesel mandate over and above the existing biofuel mandate. The EPA has proposed a 2013 biodiesel mandate of 1.28 billion gallons, which would rise to 1.81 billion gallons in this analysis due to the “extra” biodiesel needed to meet the renewable mandate (1.28 + 800/1.5). Of course, we know that in reality there is a large stock of D6 ethanol RINs that can be drawn upon to meet the renewable gap above the blendwall. The key is that our analysis shows the value of the D6 RINs in this stock should be basically equal to the price of D4 biodiesel RINs since in the absence of the stock of D6 RINs the renewable gap would have to be filled by producing and blending biodiesel.

So, how well does our prediction of D6 RINs prices equaling D4 RINs prices hold up? D6 prices in 2013 rose right up to the D4 level and have since settled slightly lower, about 10 cents on average. The difference may reflect expectations of changing EPA policy, varying expectations about how fast parties will draw down the stocks of D6 RINs, or the potential for some expansion of the blendwall through increased consumption of E15 or E85. Overall, the prediction worked out above provides a good benchmark for assessing the rationality of D6 RINs prices. There is no evidence that D6 ethanol RINs prices have exceeded their “fundamental value” due to speculative pressures, but instead have reached a level quite consistent with a market equilibrium constrained by an E10 blendwall. We also show in Figure 6 the price history of D5 advanced RINs prices. The undifferentiated part of the advanced RFS mandate has largely been filled in recent years by sugarcane ethanol from Brazil or additional biodiesel (see here for a discussion). If sugarcane ethanol is the least cost alternative for compliance, then the same economics apply as in Figure 5 and D5 RINs should be priced as D4 RINs. If biodiesel is the least cost alternative, then a D5 RIN should obviously be priced the same as a D4 biodiesel RIN. Either way, a D5 RIN should be valued the same as a D4 RIN, this is precisely what has happened in 2013. There has been very little difference in D5 and D4 RINs prices since the first of the year. 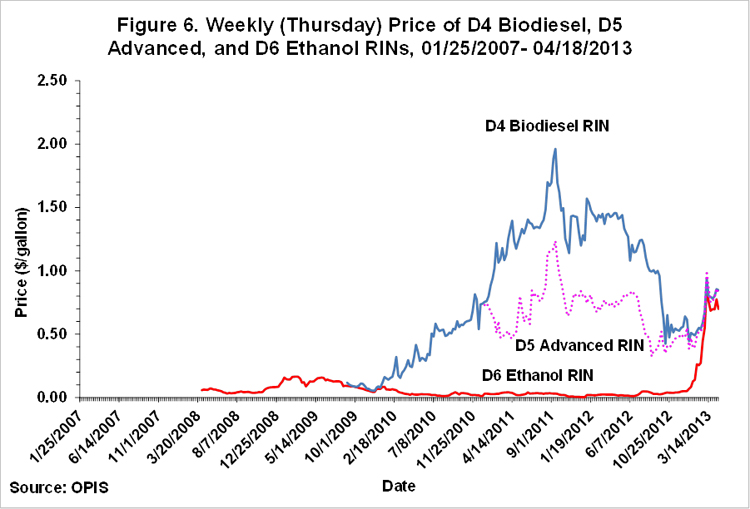 The price of D6 ethanol RINs has risen to a level that makes economic sense once one carefully works out the implications of an E10 blendwall and increased RFS mandate for the market equilibrium in ethanol. Unless the EPA changes the way they implement the mandates in the near future (and they could), the price of D6 ethanol RINs will basically be determined by the price of D4 biodiesel RINs. This means that understanding the drivers of ethanol RINs prices really requires understanding the drivers of biodiesel RINs. This is an interesting topic that we will take up in a future farmdoc daily post.