The current domestic ethanol market is dominated by the ongoing collision between the RFS for renewable biofuels and the E10 blend wall. Given the slow pace of market penetration of E15 and E85, the RFS likely exceeds the blend wall for ethanol in all blends in 2013. The difference between the magnitude of the RFS for renewable biofuels in 2013 (13.8 billion gallons) and the effective blend wall (estimated at 12.9 billion gallons) will be addressed with the use of blending credits accumulated from previous discretionary ethanol blending, some increase in higher blends, or possibly by discretionary blending of biomass-based biodiesel if those blending margins become positive.

Ethanol blended in the fuel supply can be produced domestically or imported from Brazil (or indirectly from Brazil through Caribbean countries). Under a blend wall constraint, imported ethanol from Brazil replaces domestically produced ethanol in the fuel supply. The magnitude of those imports, then, has important implications for the domestic ethanol industry and the demand for corn. The magnitude of U.S. ethanol imports are determined by both supply and demand considerations. The supply of Brazilian ethanol available to export to the U.S. equals Brazilian production minus domestic Brazilian consumption minus exports to other countries. Brazilian ethanol production in 2013 is expected to be larger than the 5.6 billion gallons of the past two years due to an abundant sugar cane crop and lower sugar prices. Production may be nearer the seven billion gallons of 2010. On the other hand, the ethanol blend in the Brazilian fuel supply is scheduled to increase starting next month. The U.S. imported about 490 million gallons of Brazilian ethanol in 2012. Peak imports were at 730 million gallons in 2006. On balance, the supply of Brazilian ethanol available for export to the U.S. this year is not expected to constrain imports. 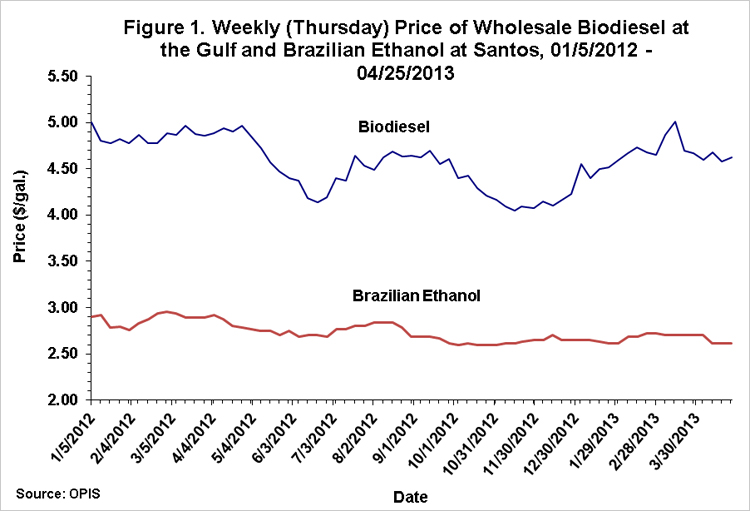 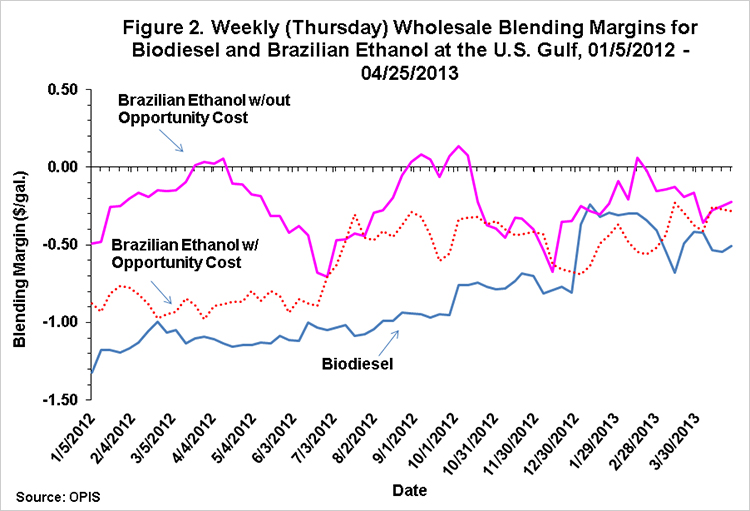 The next interesting question is whether the influence of the changing blending relationships can be detected in recent trends for Brazilian ethanol imports. The U.S. Energy Information Administration (EIA) reports U.S. ethanol imports on a weekly basis (Figure 3). Weekly imports are both highly variable and seasonal. Largest imports tend to occur after the peak of Brazilian sugar cane harvest and ethanol production in the last half of the calendar year. While still very early in the year, imports this year have been larger than those of a year ago. Through April 26, imports have totaled 100 million gallons, compared to only 23 million gallons in the same period last year when imports were partially constrained due to smaller Brazilian production. There appears to indeed have been an upward jump in the average level of imports since early February, consistent with the changing blending economics. 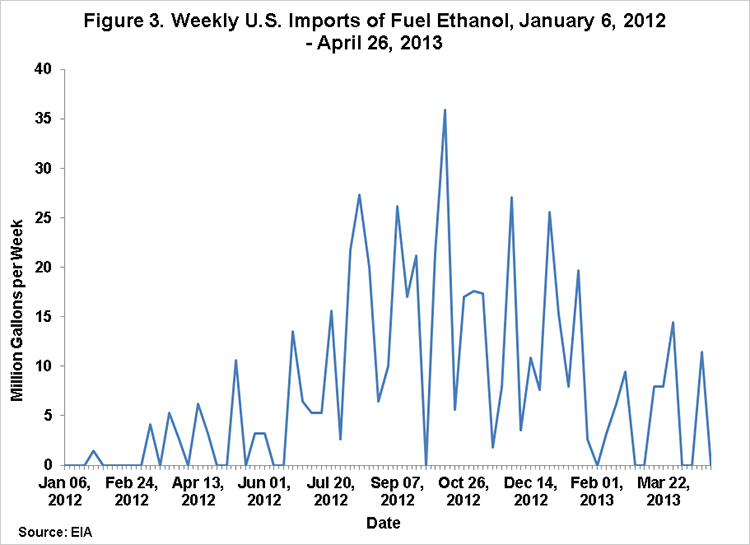 In a post on April 10 we projected imports during 2013 at only 200 million gallons. It now appears that imports could be much larger and could exceed those of last year. With the wide swings in relative blending margins, an import forecast cannot be made with much confidence. Expectations near 600 million gallons appear to be common among market analysts. Blending margins and weekly EIA import estimates will have to be monitored closely for clues as to the ultimate magnitude of Brazilian ethanol imports this year. In addition, the monthly estimates of biomass-based biodiesel production will provide clues as to whether production will exceed the minimum of 1.28 billion gallons and reduce the need for Brazilian ethanol imports. One of the difficulties with that analysis, however, is the substantial difference between production estimates for the EIA and from the EPA, as illustrated in Figure 4. Since August 2011 monthly biodiesel production estimates from the EPA have averaged about 16.5 million gallons more than EIA estimates. It is not obvious why this difference has emerged. 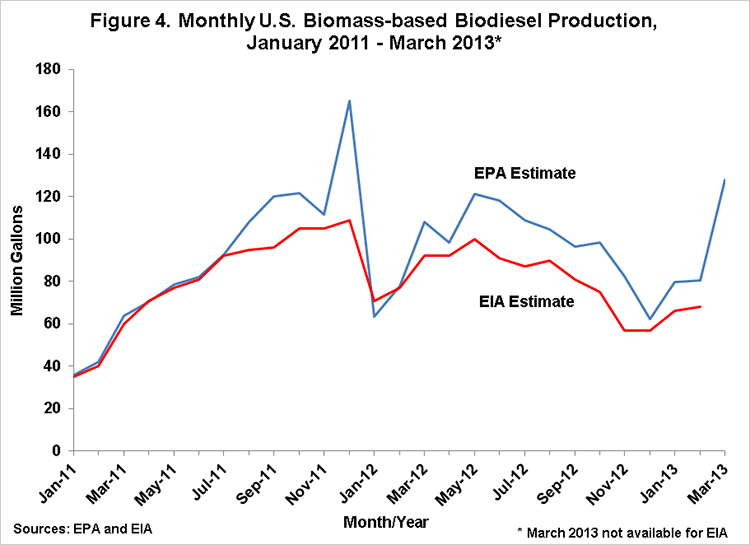 This analysis also underscores the importance of the rate of growth in consumption of E85. A more rapid growth rate would expand the ethanol blend wall allowing larger domestic ethanol production and larger corn consumption. We will examine the conditions necessary for E85 expansion in a future post.