This post is the 4th in a series that contrasts and compares the farm prosperity of the 1970s with the current period of farm prosperity. This post examines U.S. farm expenses during the two periods. The previous 3 posts are available here, here, and here.

The latest calendar year for which information on farm expenses by input type is available is 2011, the 6th year after 2005. The comparable year for the 1970 period is 1978, the 6th year after 1972. There is no definitive way to decide when to start the period of prosperity or what period to use as a benchmark, but these choices are reasonable. As more data become available for the current period, the analysis period can be extended, but 6 years is long enough for an initial comparison. 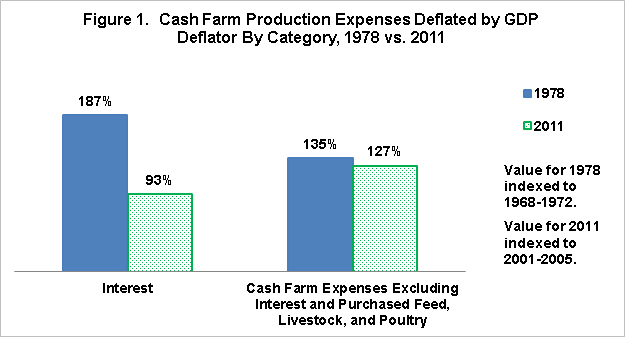 Figure 1 also presents cash farm expenses excluding interest as well as feed, livestock, and poultry purchased by farms. The latter three expense categories are removed because I would like to focus this post on crop production expenses. While some of the other input categories used by USDA include expenses for livestock and poultry production, these expenses are entirely related to livestock and poultry production. The resulting category of generally crop-related expenses also had increased more by 1978 than by 2011, although the difference was much smaller than for interest: 35% between 1968-1972 and 1978 vs. 27% between 2001-2005 and 2011. This comparison thus suggests that deflated cash crop production expenses have increased by less during the current period of farm prosperity than during the 1970 period of farm prosperity. 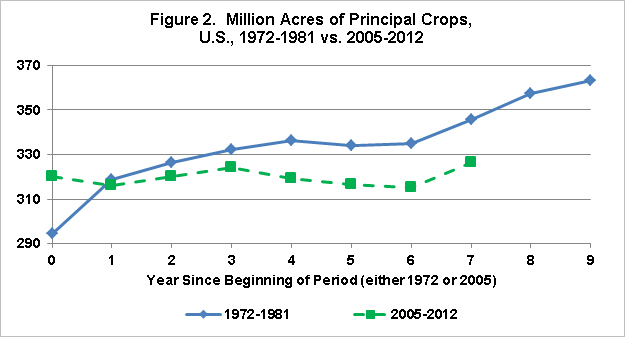 Another factor is the role of conservation programs. Of particular relevance are the Conservation Reserve Program (CRP), which pays farms to produce environmental services as opposed to crops, and the sodbuster and swampbuster provisions, which prevent farms from bringing these types of land into crop production. These 3 conservation programs were first enacted in the 1985 Farm Bill. Approximately 25 million acres are currently enrolled in CRP. In addition, approximately 2 million acres are enrolled in the Wetlands Reserve Program.

Two additional points are worth making. First, the expansion in corn acres since 2005 (15 million) has mostly come from acres planted to other crops. This realignment of acres may be causing unease among agribusiness firms and farms tied to other crops regarding their future in a world of increasing corn acres.

Second, the impact on production expenses by the differential change in acres between the two periods of farm prosperity can be assessed in a simple manner. Deflated cash farm expenses excluding interest as well as purchased feed, livestock, and poultry can be divided by the number of acres planted to principal crops. Between 1972 and 1978 this per acre measure of deflated cash farm expenses increased by 20%. Between 2005 and 2011 the increase was 30%. This comparison implies that, once the different path of acres is taken into account, it is likely that crop expenses per acre have increased more during the current period of farm prosperity than during the 1970 period of farm prosperity.

Comparison of Expenses by Input

Figure 3 presents the change in deflated expenses for purchased seed, fertilizer and lime, pesticides, fuel and oil, property taxes, and net rent. Property taxes, fertilizer and lime, and net rent had all increased more during the current period of farm prosperity. The rate of increase during the two periods of prosperity was relatively similar for purchased seed and fuel and oil. On the other hand, spending on pesticides increased more during the 1970s. Moreover, during the current period of prosperity, spending on pesticides have had a smaller percentage increase than any of the other expense categories listed in Figure 3. Thus, pesticide expenses have dampened the overall increase in total cost of crop production. Last, despite all of the talk about increasing land rents during the current period of farm prosperity, they have increased by a smaller percent than any of the other inputs included in Figure 3, except for pesticides. 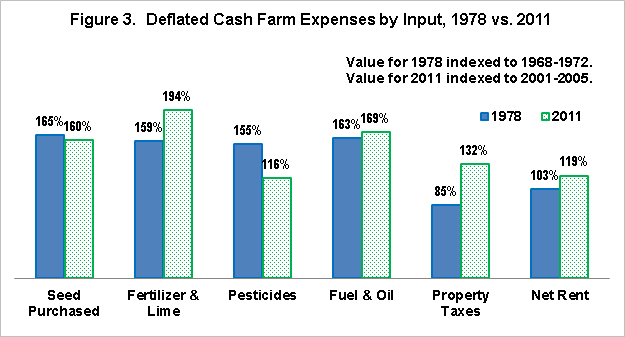 The different time paths of interest expense and land planted to principal crops are major differences between the current and 1970 periods of farm prosperity. The muted increase in interest expense during the current period of prosperity has positively impacted net farm income and allowed farms to avoid debt. However, the muted increase in interest expense also means that any downturn in crop revenue will result in a cost-price squeeze between crop prices and the prices of crop production inputs. A key question could become how much flexibility do crop farms have when buying crop inputs. The sharp decline in crop prices in 2009 led farms to delay input purchases. This event could foreshadow a far more intense confrontation if, probably when not if, a longer lasting decline in crop prices occur. In short, crop input suppliers may bear far more of this adjustment process than they did during the 1980s, when declining debt and interest expenses bore more of the adjustment.

The lack of expansion in planted acres in the U.S. implies that the often-referenced food vs. fuel debate is an inaccurate characterization of the situation confronting U.S. agriculture in the 21st Century. U.S. crop agriculture has become not only a provider of food and fuel but also a provider of environmental services, such as reduced water and wind erosion and improved wildlife habitats. In other words, 21st Century Agriculture is not just characterized by an expansion into the fuel market but also by an expansion into the environmental services market. Hence, it is not a food vs. fuel dilemma but a food vs. fuel vs. environmental services dilemma. It is not unreasonable to conjecture that crop prices would be notably lower and livestock profits notably higher if all the land in CRP was in production. This observation is not a criticism of farm environmental programs. Instead, it is pointing out a fundamental difference between the current and 1970 periods of farm prosperity — the willingness of contemporary American society to continue to support farm-based environmental services in a period of high farm commodity prices. To put this observation somewhat differently, are the events of the last 7 years asking us to ponder this question, Is U.S. society as whole choosing farm environmental services over profitability of the U.S. livestock sector?

The next post in this series will further examine the expansion in production during the 1970 and current periods of farm prosperity.