This post is the fifth in a series that contrasts and compares the farm prosperity of the 1970s with the current period of farm prosperity. It examines the response of corn, cotton, soybean, and wheat production during the two periods of prosperity, both in the U.S. and the rest of the world. These 4 crops are examined because they have the largest quantity and value of exports among U.S. crops. The previous posts in this series are available here, here, here, and here.

These variables are examined for both the U.S. and world: (1) harvested area, (2) production, and (3) yield per harvested area. Source of the data is the United Nations, Food and Agriculture Organization, available here. As with most posts in this series, a benchmark average value is calculated for 1968-1972 and 2001-2005. These periods predate the 1970 and current period of farm prosperity, respectively. Five year averages are used to dampen the variability that can exist if a single year is used as a benchmark. The latest year for which information is available is 2011, the 6th year after 2005. The 6th year after 1972 is 1978. There is no definitive way to decide when to start the period of prosperity or what period to use as a benchmark, but our choices are reasonable. While the current period of prosperity is still on-going, 6 years is long enough for an initial comparison. 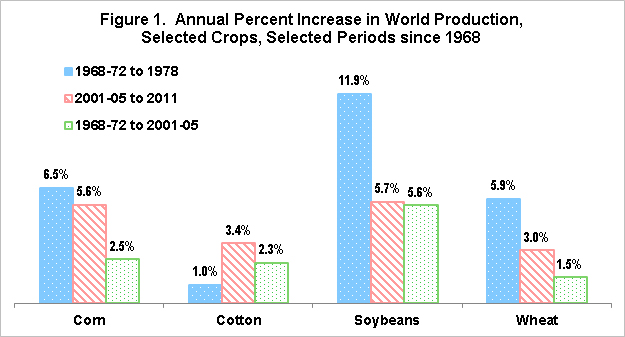 Figure 1 also reveals that, excluding cotton, average annual increase in world production has been slower between 2001-2005 and 2011 than between 1968-1972 and 1978. In particular, soybean production has grown slower. This finding may come as a surprise given the attention devoted to Chinese soybean demand. A factor contributing to this finding is that world soybean production averaged 240 million metric tons in 2007-2011 vs. 44 million metric tons in 1968-72. Higher growth rates are easier to obtain when production is small for no other reason than production is expanding from a small base. In contrast, the annual increase in quantity of soybeans produced was more than double between 2001-2005 and 2011 than between 1968-1972 and 1978 (11.1 vs. 5.2 million metric tons per year). Nevertheless, the annual percent growth rate is so much smaller during the current prosperity that other factors are likely at work. The most likely is the growth in distillers dried grain from increasing ethanol production. Distiller dried grain can partially substitute for soybean meal in feed rations, with the amount of substitution varying by animal species and stage of development.

The story that emerges for both production and area is similar. Therefore, the following discussion will focus on harvested area. Between 1968-1972 and 1978, the U.S. accounted for 24%, 38%, 51%, and 52% of the increase in world harvested area of wheat, cotton, soybeans, and corn, respectively. In comparison, the U.S. contribution between 2001-2005 and 2011 was -26%, -75%, 2%, and 18% for wheat, cotton, soybeans, and corn, respectively. Thus, a striking difference between the two periods of farm prosperity is the much smaller role of the U.S. in the world production response during the current period of prosperity. One reason for this difference is the smaller expansion in U.S. crop area during the current period of prosperity, which was discussed in a previous post available here.A negative number means U.S. harvested acres declined. Thus, harvested area in the rest of the world had to increase more than for the world as a whole to offset the U.S. decline. To illustrate, area of cotton harvested in the U.S. declined by 3.3 million acres between 2001-2005 and 2011. Area of cotton harvested in the world increased by 4.4 million acres, meaning that harvested cotton acres increased by 7.7 million acres in the rest of the world.

A competitive advantage long held by U.S. crop production is its higher yield. However, this advantage has declined substantially since the late 1960s and has disappeared for wheat (see Figure 6). In addition, average soybean yield over 2007-2011 was slightly higher in Brazil than the U.S. The long term decline in competitive yield advantage has underpinned a drop in the U.S. share of world production, especially for soybeans (see Figure 7). The decline has continued during the current period of farm prosperity, reflecting the lack of expansion in U.S. harvested area. The decline in the U.S. role in world cotton production during the current period of farm prosperity is especially notable. The size of this decline in combination with the slightly higher U.S. share in 2001-2005 than in 1968-1972 is consistent with the argument that U.S. cotton policy was substantially distorting U.S. production during the early years of the 21st Century. 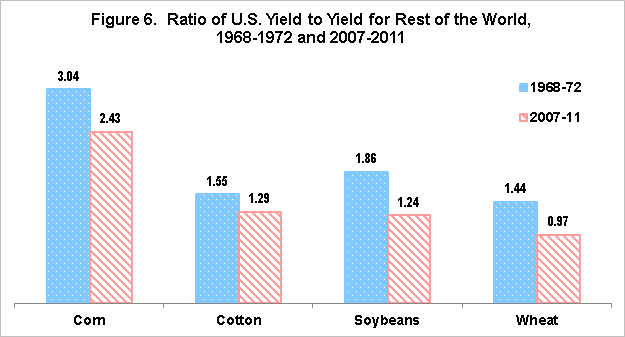 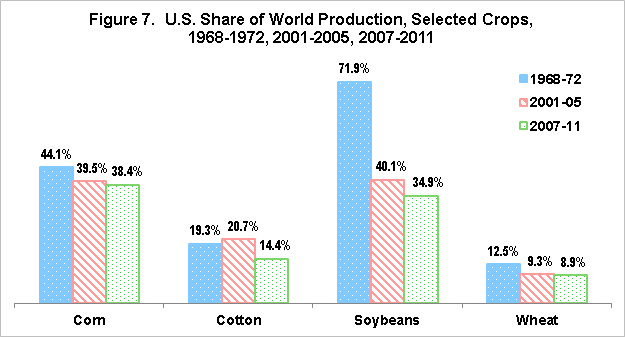 A distinct difference between the current and 1970 period of farm prosperity is the much smaller role the U.S. has played in the expansion of world production of corn, cotton, soybeans, and wheat during the current period of prosperity. In addition, the yield advantage of U.S. crops has been in a long term decline. Consequently, the role of U.S. crop agriculture in world crop agriculture is smaller during the current than 1970 period of farm prosperity.Everything else the same, a declining U.S. role in world production means that the natural hedge for U.S. production should decline. The natural hedge is that a decline (increase) in production by a country will cause price to increase (decline). These offsetting changes stabilize revenue. The more important a country’s role in world production the more likely that changes in its production will affect price, thus increasing the reliability of the natural hedge. Since the U.S. role is declining, the natural hedge should decline, causing the variability U.S. crop revenue to increase.The long term decline in the long-standing competitive advantage of U.S. crop production resulting from higher yields needs to be discussed. Specifically, U.S. agriculture needs to ask itself what factors will maintain its international competitive advantage as its yield advantage declines. This discussion is critically important for wheat, but increasingly so for cotton and soybeans.Even though it is declining, the U.S. currently has a sizeable yield advantage in corn. Nevertheless, it is reasonable to expect that, as the U.S. develops drought tolerant and short season varieties for its drought prone and northern production areas, it will also bring more land into corn production around the world and will increase production on existing corn land that has less than ideal production capability. The 2007-2011 ratio of U.S. corn yield to rest-of-the-world corn yield is 2.43. In comparison, the 2007-2011 ratio of U.S. corn yield to North Dakota corn yield is 1.30, suggesting that the rest of the world can significantly expand corn production even without increasing acres.While the financial crisis and associated bankruptcies of the 1980s were a traumatic event for U.S. crop agriculture, the most important, long lasting impact of the 1970 period of prosperity on the U.S. crop sector likely was the stimulus it provided to produce soybeans in South America. Similarly, it is possible that the most important, long lasting impact of the current period of farm prosperity is the stimulus it is providing to produce corn around the world.A declining competitive advantage for U.S. crops will ultimately reduce the relative advantage of U.S. farmland and thus the price it can command. History never exactly repeats itself. Just because U.S. farms have not taken on substantial debt (see previous post here) during the current period of farm prosperity does not mean that farmland prices cannot decline. As revenue per acre declines, the value of farmland will decline. Revenue per acre can decline because price declines but also because relative yield declines. In short, the U.S. crop sector may be as vulnerable as it was in the late 1970s. This time, however, the reason is not debt, but may be declining competitive advantage.The next post in this series will examine the response of U.S. livestock production during the two periods of farm prosperity.