The USDA’s weekly Crop Progress report indicated that 43 percent of the U.S. corn acreage was planted during the week ended May 19, 2013. In terms of percentage of acreage planted, that equaled the record progress for the week ended May 10, 1992. In 1992, 79.3 million acres of corn in the U.S. were planted, implying that 34.1 million acres were planted during the peak week that year. U.S. corn planting intentions for 2013 were reported at 97.3 million acres, implying that 41.8 million acres were planted last week. Conventional wisdom explains the rapid rate of planting progress this year as a function of larger and more technologically sophisticated planters.

Here, we repeat that earlier analysis of peak week corn planting with the addition of 2012 and 2013 planting data. The analysis is limited to Illinois due to the lack of data relative to the number of suitable field days available per week in other states over a long time period. There is not an obvious reason that the results for Illinois would differ for other major corn producing states. 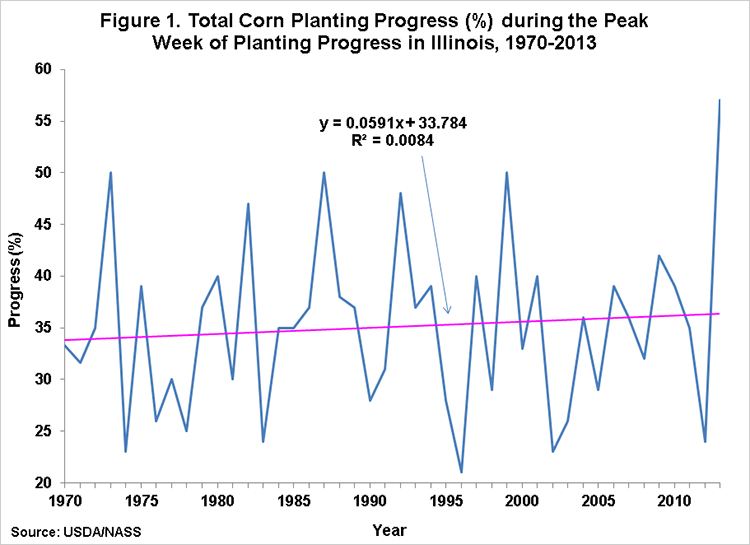 Figure 2 portrays the percentage of the corn acreage planted in Illinois per suitable field day in the peak week of planting from 1970 through 2013. The calculations confirm our previous findings of a very modest increase in the planting rate per suitable day over time. With 5.8 suitable days reported for the week ended May 19, 2013, an average of 9.8 percent of the acreage was planted per suitable field day during the week. That is above the long term trend of 7.6 percent, but well below the previous highs of 11.1 percent in 1975 and 13.2 percent in 1999 and equal to the rate in 1994. 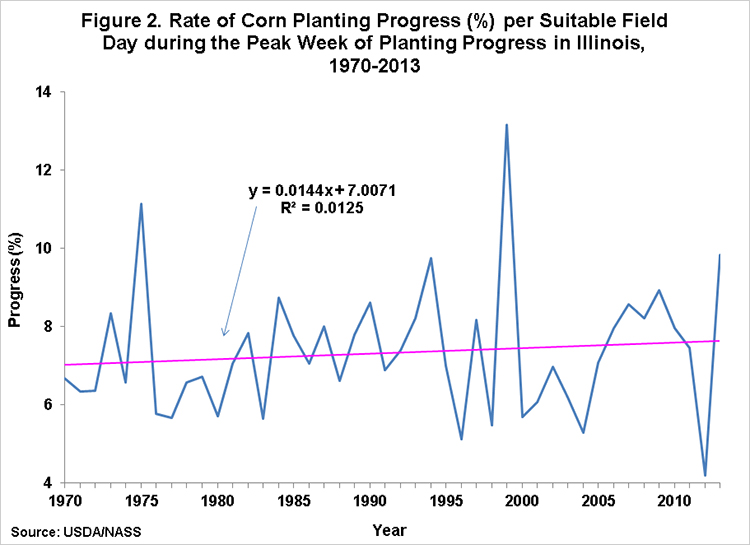 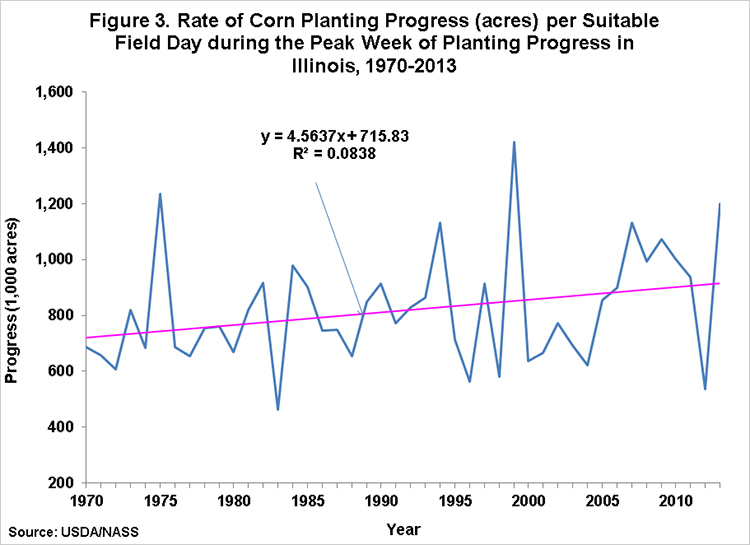 The rate of corn planting during the peak week of planting, measured in total acres, has increased over time. Much of that increase is likely attributable to larger equipment and improved technology. However, the increased speed of planting has just about offset the increase in total acreage so that the pace of planting as measured by percentage of total acreage planted has increased very slowly over time. The peak-week corn planting pace, at least in Illinois, was not record high in 2013, as measured in either total acres or percentage of acres planted per suitable field day.

These results suggest that the daily rate at which the U.S. corn crop can be planted is likely still less than generally perceived. A key observation is that weekly progress in percentage terms should be normalized for differences in suitable field days in order to make ‘apples to apples’ comparisons across time. From this perspective, we see no reason to fundamentally alter the conclusion we reached in 2011 about planting progress, “The evidence suggests that the crop is not planted more quickly with larger, but fewer planters than was accomplished with smaller, but more numerous planters in the past…Weather is likely still the largest determinant of overall planting progress rather than equipment size.”