In a recent post we examined price relationships that would allow E85 to be priced equal to its energy equivalent value relative to that of E10. We concluded that retail E10 prices, wholesale ethanol prices, corn prices, and D6 RINs prices at the end of the first week of June were conducive for competitive pricing of E85 at the pump. A continuation of favorable price relationships could result in an increase in E85 consumption and help fill part of the gap between the RFS mandate for renewable biofuels and the E10 blend wall in 2013 and 2014. Here we examine recent trends to determine if there is evidence that E85 consumption is actually increasing or likely to increase in the near future. We examine the following trends in search of that evidence:

Figure 1 shows the relationship between the weekly Midwest retail price of E85 and our calculation of the cost of E85 for the period from February 8, 2007 through June 13, 2013. Our model for the retail cost of E85 is calculated as:

As in our other recent posts on E85 we assume that E85, on average, consists of 74 percent E100 and 26 percent CBOB. We also subtract the ethanol blenders’ tax credit from the price of ethanol when the credit was in effect over the sample period, which is based on the assumption of full pass-through of the credit from blenders to ethanol producers. Without this assumption the retail cost of E85 is well-above the market price of E85 much of the time. Finally, we assume that the wholesale-retail spread for E85 is $0.75 per gallon. 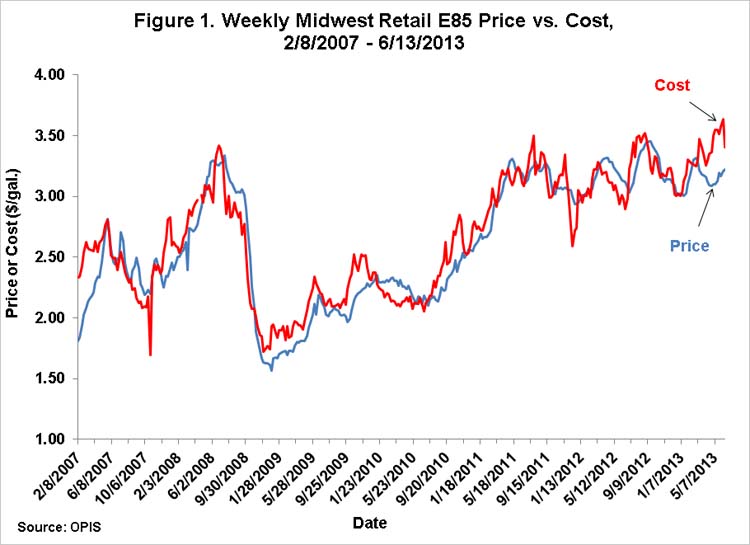 Figure 1 reveals that the relationship between our estimate of cost and price has varied somewhat, but has generally tracked fairly closely over time so that E85 has apparently been priced based on acquisition cost plus a wholesale-retail spread. However, starting in March 2013, the average retail price of E85 has been well below the calculated cost. The discount may be associated with the much higher prices for D6 RINs beginning in early 2013. Those RINs can be sold by non-obligated ethanol blenders or by obligated parties who have discretionary blending to augment the selling price of E85.

The large E85 price discounts relative to acquisition cost, however, do not reveal whether or not E85 has been priced at a breakeven energy value relative to E10. Based on the assumed average E85 composition of 74 percent ethanol and 26 percent CBOB, we calculate the breakeven energy value of E85 to be 77 percent of the price of E10. Figure 2 shows the ratio of weekly Midwest retail E85 and E10 prices relative to that breakeven ratio from February 8, 2007 through June 13, 2013. With a few exceptions, E85 has been priced above the breakeven ratio for most of that time and continued to be priced above that ratio through last week. In the last year, the average ratio was 87 percent. These price relationships suggest that E85 has not been priced low enough relative to E10 to expand consumption. While E85 prices have recently moved towards more competitive levels, perhaps because of the incentives provided by high D6 RINs prices, there is still some distance to go. 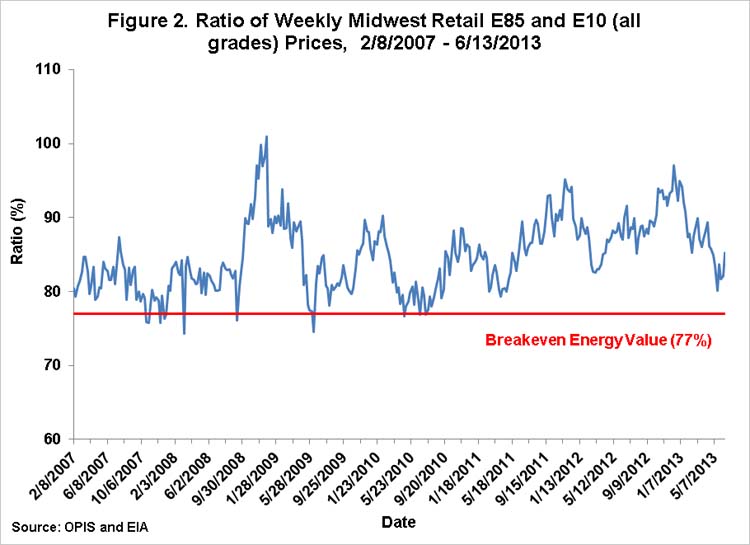 It would, of course, be ideal if the magnitude of E85 consumption could be observed on a timely basis. Consumption data, however, are somewhat sparse and there are time lags in the reporting of the data. Monthly E85 production data are provided by the U.S. Energy Information Administration (EIA), but there are also substantial time lags in the reporting of that data. Figure 3 shows monthly U.S. refinery and blender production of motor gasoline with at least 55 percent ethanol content from December 2010 through March 2013. Monthly production has generally moved in a narrow range of 2.5 to 4.0 million gallons, with no discernible upward trend to date. A continuation of this pattern will hardly expand the ethanol blend wall in the near future. 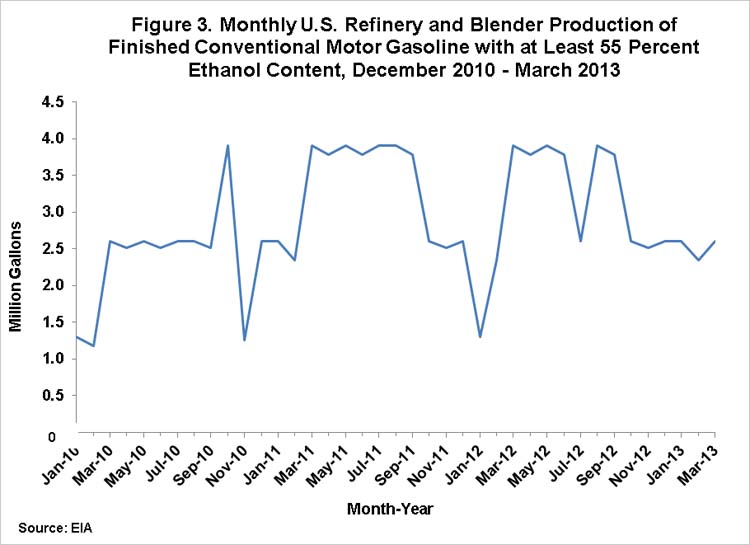 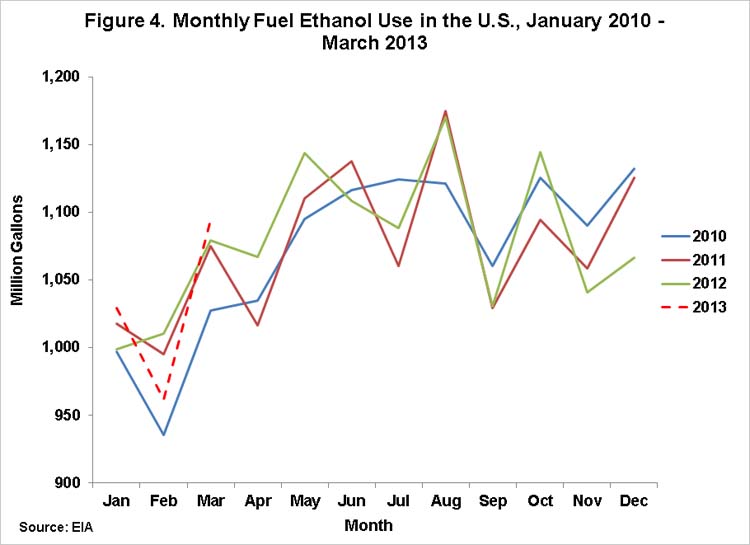 Available E85 price, production and consumption data suggest that E85 consumption has not expanded by a meaningful amount so far in 2013, despite the incentives provided by high D6 RINs prices. It appears that with the year about half over E85 consumption in 2013 will not substantially expand the blend wall for ethanol. This is not terribly surprising in light of the limited number of E85 refueling stations in the U.S. (EIA reported that only 2,544 of the approximately 160,000 gas stations in the U.S. can dispense and sell E85). So, even with incentives for favorable pricing, the size of the E85 market is likely tightly constrained in the short-run. If that is the case, the potential gap of 600 to 700 million gallons between the E10 blend wall and the RFS for renewable biofuels of 13.8 billion gallons in 2013 will have to be filled with some combination of RINs credits and biodiesel consumption.

In sum, the incentives are in place for increased E85 consumption to occur, but there is considerable uncertainty as to how long it will take for these to filter down to consumers or how quickly additional investments will be made in E85 refueling capacity. In addition, uncertainty about 2013 and 2014 RFS rulemaking by the EPA is not helpful in getting the needed infrastructure investments moving. We will continue to monitor market data for signs that E85 consumption is picking up. We will also examine in a subsequent post the available evidence on the magnitude of domestic biodiesel consumption so far in 2013.