In the last RIN stock update post from April, EPA data on available RINs indicated a total of 2.5 billion 2012 RINs across the biodiesel (D4), advanced (D5), and renewable (D6) categories. Of this total, just over 2 billion D6 RINs were available. This post takes a look at more current available RINs data, and also examines 2013 RIN production through April 2013.

Table 1 below shows that available 2012 RINs have not changed considerably over the past few months. There are just over 300 million biodiesel, 139 million advanced, and just over 2 billion renewable RINs available for use in 2013 mandate compliance. Based on a series of analyses on the RFS mandates here at farmdoc Daily (see examples here, here, and here), it is likely that these RIN stock levels will be needed, in addition to new RIN generation and associated physical blending, to meet the 2013 and 2014 RFS mandate levels due to blend wall issues.

Current stock levels have been accumulated through biofuel blend volumes exceeding mandate levels prior to 2012 due to favorable blending economics for obligated parties. Recent analysis from Scott Irwin and Darrel Good shows that while blending margins have continued to remain favorable, the E10 blend wall is now imposing a physical constraint on meeting RFS mandate levels over the next few years.

Figure 1 below plots the ratio of monthly D6 RIN generation to implied monthly requirements to meet the mandate each year. When this ratio is above 1, as it was throughout 2011, RIN stocks are being accumulated for compliance use in future periods, allowing obligated parties to potentially avoid physical blending. When the ratio falls below 1, as it has since mid-2012, the need for D6 RIN stocks (or other D-code RINs) is required for mandate compliance. 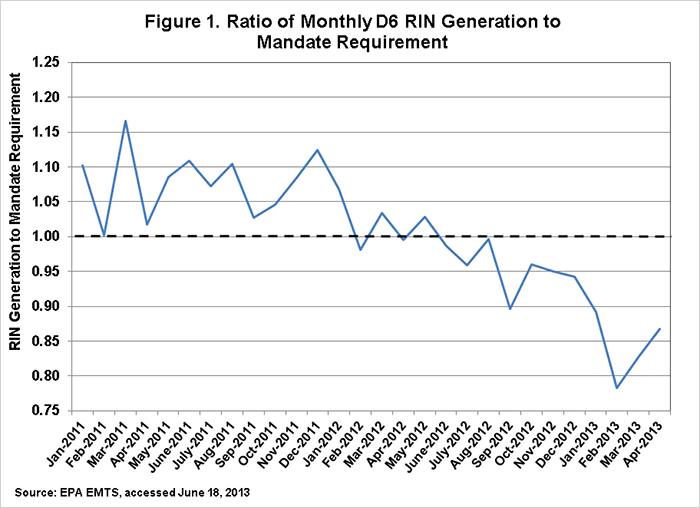 While current D6 RIN stocks are sufficient to cover the expected gap for 2013, use at this level would significantly reduce RIN carryover into 2014 from 2 billion gallons to approximately 500 million gallons. Furthermore, in 2014 blend wall issues will further tighten as the total and renewable mandates rise to 18.15 and 14.4 billion gallons, respectively.

Current levels of available 2012 RIN stocks have not changed significantly over the past few months. However, 2013 RIN generation across the D4, D5, and D6 categories implies that these stock levels could be significantly reduced in 2013. This will provide lower RIN carryover into 2014 when mandate levels continue to rise and physical blending constraints tighten further due to the E10 blend wall. This will force increased blending of biodiesel (see here for more info), which does not face the blend wall, or increased use of higher ethanol blend rates such as E15 or E85 (see here for more info).