In a post last week, we provided an analysis of the price of corn that could result in retail E85 prices being breakeven with E10 prices based on the relative energy value of the two fuels. In that analysis, the price of ethanol was assumed to be at a level that would allow ethanol producers to cover all costs of production for a given price of corn. That breakeven price relationship was estimated as follows:

The analysis purposely did not include the price of ethanol (D6) Renewable Identification Numbers (RINs) in the calculation of breakeven prices. The implicit objective was to identify breakeven prices for corn in the absence of a RINs market in order to assess the likelihood that market prices of corn could make E85 competitive in the absence of RINs credits. We concluded that at current retail fuel prices, cash corn prices are currently too high for E85 to be profitably priced relative to E10. However, prices for corn at harvest of the new crop were near a breakeven level.

Here we extend the breakeven analysis to include the D6 RINs market. The price of D6 RINs is important in the analysis because those RINs can be sold by parties who own or become owners of RINs. Under RFS2, for example, non-obligated parties who blend ethanol and obligated parties who blend ethanol in excess of mandated levels become long RINs. The selling price of RINs, then, can potentially augment the breakeven retail selling price of E85 for some participants in the gasoline supply chain, meaning that a higher price can be paid for ethanol (and corn). In essence, the RIN value can be used by blenders who are long RINs to support a higher price paid for ethanol (and implicitly corn) and still offer E85 to consumers at its relative energy value.

The breakeven analysis is based on the following relationships and assumptions:

For this analysis, we use the following prices, which are near the market values at the end of the first week of June:

Each gallon of E85 blended, however, generates 0.74 RINs priced at $0.95. If the blender is long RINs (RIN not needed to meet RFS2), each gallon of E85 blended would generate RINs sales valued at $0.70 (0.74 X 0.95). That value is more than large enough to allow E85 to be priced at its energy equivalent value. The current price of corn is also below the breakeven price for covering all ethanol production costs at the current price of ethanol, distillers’ grains, and corn oil.

The ability for retailers to profitably price E85 at its energy equivalent value and for ethanol producers to cover all costs of production in the future depends on the wholesale price of ethanol, the price of D6 RINs, and the retail price of E10 (wholesale CBOB + $0.75), and the price of corn, all of which are subject to change. There are a large number of combinations of prices that make E85 work. These combinations are illustrated in Figures 1 through 5. In each figure, the price of one product is fixed at the current price and the combination of breakeven prices for two other products is shown. Please note that RINs prices in the figures are not adjusted for the assumed yield of RINs per gallon of E85 (0.74). 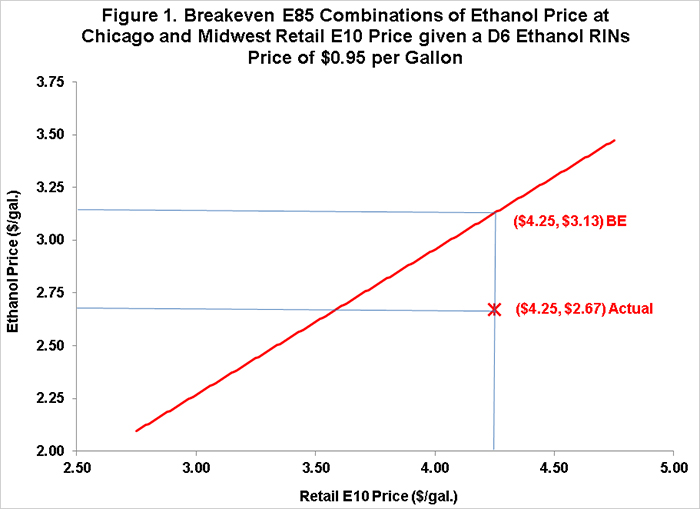 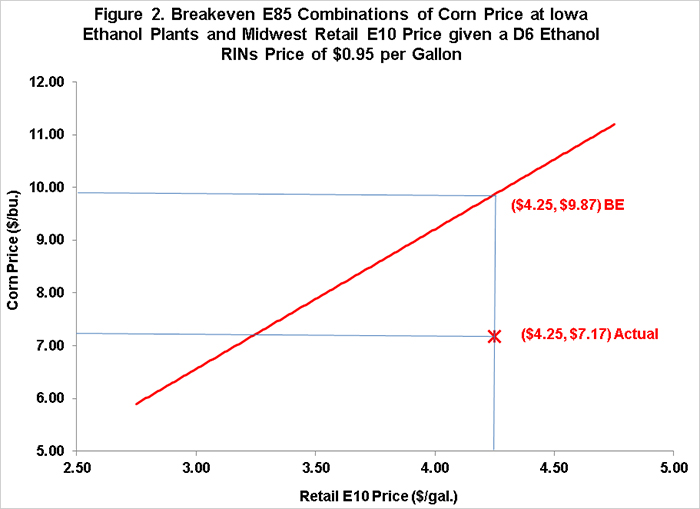 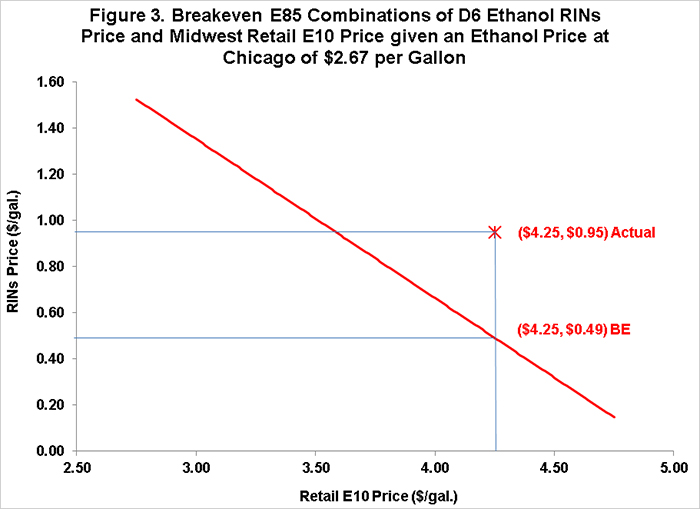 Figure 4, shows the combination of breakeven prices for wholesale ethanol and D6 RINs with the retail E10 price fixed at the current level of $4.25. That relationship shows that with ethanol prices at $2.67, the breakeven price of D6 RINs is $0.75, with the * indicating that RINs prices are currently above the breakeven price. 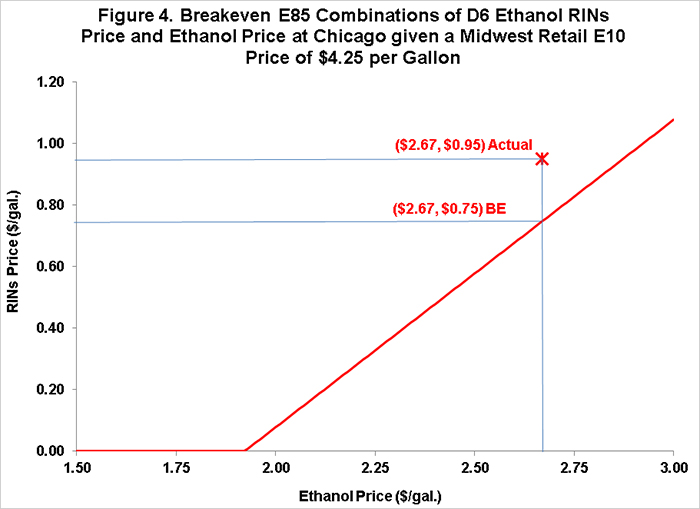 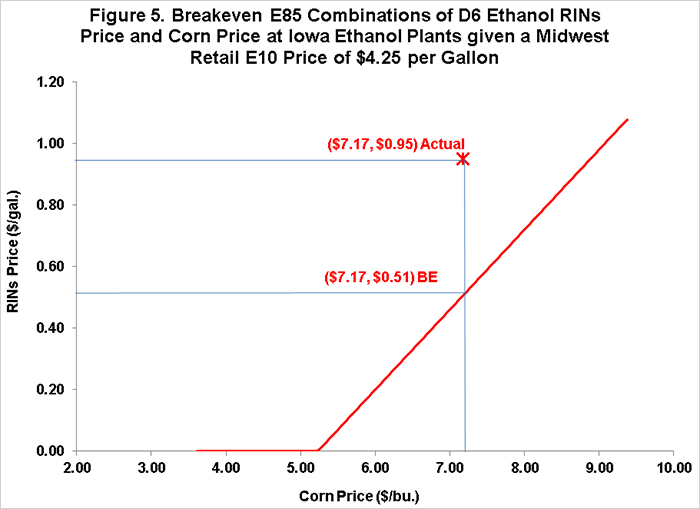 Based on current D6 RINs prices, wholesale ethanol prices, and retail E10 prices, pricing E85 at its energy value relative to E10 and selling RINs should provide a positive margin for blenders who are naturally long D6 RINs. This includes blending by non-obligated parties and discretionary blending by obligated parties. The margin provided by RINs is also rather substantial at the present time, with the RINs price about $0.45 per gallon (or $0.33 after adjusting for RINs generation per gallon of E85) higher than needed for breakeven E85 pricing. It should also be noted that there is considerable uncertainty at the present time about the magnitude of E85 usage needed to potentially meet the RFS in the next several years. The EPA has some flexibility in how it may implement the RFS mandates and this will have a direct bearing on RINs values and the incentives for E85 blending and consumption.

Finally, under the scenario analyzed here, there should be competitive pressures forcing E85 and E10 prices in line with relative energy value and consumption of E85 expanding. Next week, we will take a look at the available evidence on these two issues.