As we have noted before, there are a number of pathways for meeting the RFS mandate for biofuels consumption when the implied mandate for conventional biofuels exceeds the blend wall. These include:

The use of blending credits was an attractive alternative for meeting blending requirements that exceeded the blend wall until the price of RINs credits exploded beginning in January this year. In addition, the supply of RINs credits is limited, so they are not a source of meeting mandates indefinitely. The second alternative of borrowing against future mandates is not attractive since mandates get larger in the future and borrowing would make meeting those requirements very difficult. The third alternative of discretionary blending of advanced biofuels is technically feasible. That blending, however, would likely have to be in the form of biomass-based biodiesel since additional blending of Brazilian ethanol would displace domestic ethanol, further exacerbating the blend wall problem. Expanded consumption of higher ethanol blends is also technically feasible. It is the general consensus, however, that significant hurdles for E15 will remain in the short and intermediate future. Fueling and consumption capacity is currently in place to expand E85 consumption.

Assuming the RFS mandates are not substantially changed by Congress or the EPA, then, beyond the very near future the pathways of E85 and biodiesel appear to be the most likely alternatives for meeting larger biofuels mandates. For the most part, however, neither of these two alternatives has been economically attractive in the past. Here, we examine the question of what price of ethanol, and the implied price of corn, that are required to allow E85 to be competitively priced at the retail level. There are a few assumptions and a number of steps required in calculating the price of corn required to make E85 a breakeven alternative.

The process starts with the retail price of gasoline. As indicated in Figure 1, that price has varied considerably over the past six years. Beginning around 2010, for the most part those prices reflect the price of E10. The second step is to calculate the breakeven price of E85 vs. E10 at the retail level. In reality, the ethanol content of E85 can vary between 51 and 83 percent so that the energy value also varies considerably. We assume that, on average, E85 contains 74 percent ethanol and 26 percent Conventional Gasoline Blending Components (CBOB). These are the annual average percentages for E85 in recent years and also the percentages assumed by the EIA for their most recent annual energy projections. As a result, we calculate that the energy value of E85 as 77 percent of E10 and assume that difference is reflected in mileage performance. This means the breakeven price of E85 at the retail level is 77 percent of the price of E10. While the logic for an energy breakeven level of E85 pricing is straightforward, there is uncertainty about whether consumers will in fact require a higher or lower discount to incentivize greater use of E85. On one hand, consumers may require a higher discount if they place a value on the time required to make more frequent refueling stops with E85. On the other hand, consumers may require a lower discount if they place a high value on the use of renewable fuels. Given the small size of E85 use in the U.S. to date, it is not surprising that the available evidence on actual consumer purchasing behavior for E85 is very limited. 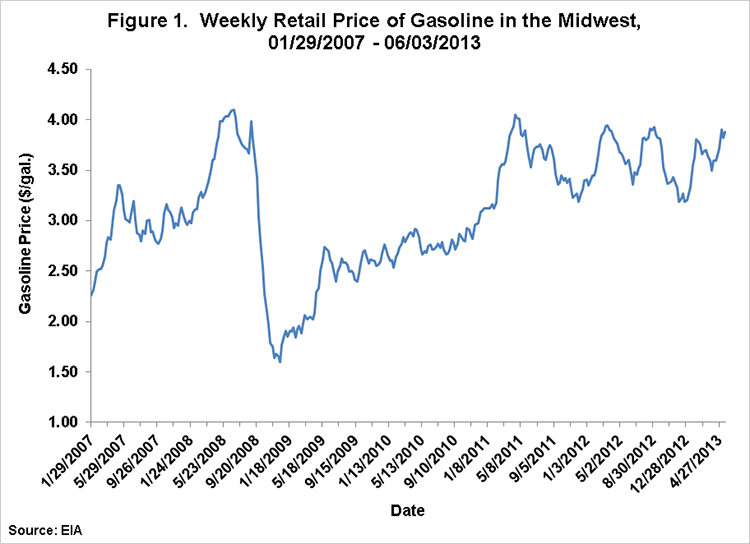 The third step is to calculate the wholesale price of E85 corresponding to the breakeven retail price. The average difference between wholesale CBOB and Midwest retail gasoline prices since 2007 has been very near $0.75 per gallon. That difference reflects the retail margin and taxes collected at the retail level. We assume the same wholesale-retail spread for E85.

In summary, the calculation of breakeven prices of E85, ethanol, and corn are those prices which would allow motor fuel retailers, fuel wholesalers, and ethanol producers to cover all costs and for motor fuel consumers to pay energy-equivalent prices for E10 and E85. Figure 2 shows those combinations of retail gasoline prices and corn prices that result in breakeven prices of E85 at the retail level. It is important to note that a direction of causality is not implied by plotting gasoline prices on the x-axis and corn prices on the y-axis. The line simply represents breakeven combinations of the two prices, making use of the assumptions outlined above. One could reverse the axes and the story would stay the same. With that important caveat, the slope of the line (2.65) indicates for each $1.00 change in the retail price of gasoline the breakeven price of corn changes by $2.65 per bushel in the same direction. For a change of $0.10 per gallon in the retail price of gasoline, then, the breakeven price of corn changes by $0.265 per bushel. The average retail price of gasoline on June 3 (indicted in red) was $3.88 per gallon, implying a breakeven price of corn of $5.24 per bushel. In other words, if the price of corn is $5.24 and the pump price of gasoline is $3.88 then E85 can be priced at its energy equivalent value and everyone from ethanol producers to gasoline consumers just breaks even. 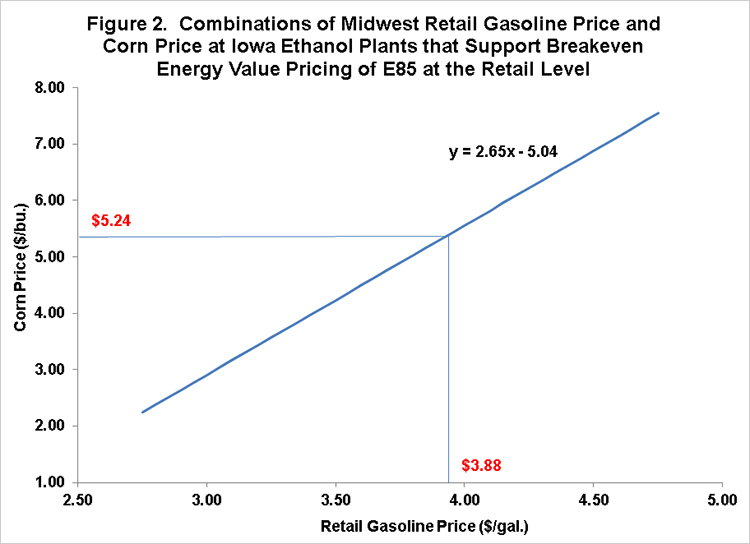 At current retail gasoline prices, spot cash corn prices, around $7, are well above the breakeven price for E85. However, bids for corn delivered during the upcoming 2013 harvest, near $5.25, are right at that breakeven corn price. Depending on the outcome of the 2013 harvest, it is feasible that corn prices could decline below the breakeven price for E85 if retail gasoline prices remain near current levels. If so, expanding E85 consumption could help expand the ethanol blend wall and add to the demand for corn to be processed into ethanol during the 2013-14 corn marketing year. To stimulate larger domestic corn consumption, however, the crop would have to be large enough to prevent corn prices from moving back above the breakeven price due to increased consumption. It is also worth noting the sensitivity of the analysis to the retail price of gasoline. If pump prices drop to $3.50 per gallon then corn prices would have to drop to $4.24 in order to maintain breakeven E85 prices.

The EIA estimated that 11 million vehicles out of the total U.S. fleet of 223 million light duty vehicles in 2012 can use E85. This represents a potentially large base of E85 usage. However, the EIA also reported that only 2,544 of the approximately 160,000 gas stations in the United States can dispense and sell E85. So, even with favorable pricing, the size of the E85 market would likely be limited in the short term due to the limited number and lack of concentration of refueling stations. Because of these limitations on current E85 refueling infrastructure, the DOE estimates that E85 consumption capacity is likely constrained to no more than about 600 million gallons per year. A market of that size could provide room for up to an additional 215 million bushels of corn processed into ethanol. However, a market of that size would not expand the blend wall enough to meet the implied mandate for conventional biofuels in 2014. It appears that increasing E85 consumption above 600 million gallons will require additional infrastructure investments. This will take time and likely limits the size of E85 use through at least 2014.