The 2014 Illinois Crop Budgets are now available on farmdoc (click here for budgets). These budgets give projected revenues, costs, and returns for corn-after-soybeans (corn planted in farmland that had been in soybeans the previous year), corn-after-corn, soybeans-after-corn, soybeans-after-two-years-corn, wheat, and double-crop soybeans. Budgets are given for northern, central, and southern Illinois. Central Illinois is further divided into categories for high and low productivity farmland. High productivity farmland has an expected corn yield of 199 bushels per acre for corn-after-soybeans while low productivity farmland with expected corn yield of 186 bushels per acre.

The 2014 Illinois Crop Budgets have four tables, one for each of the above regions. The table for northern Illinois is shown in Table 1. 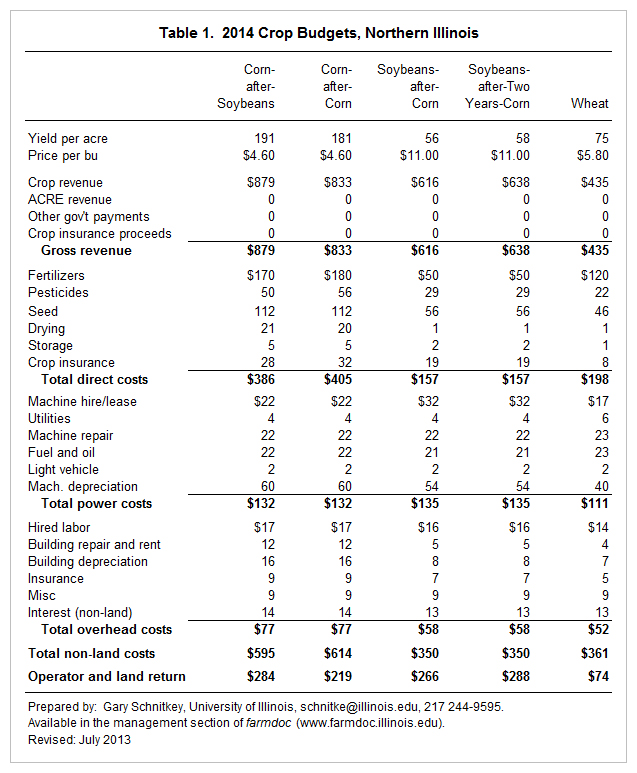 Non-land costs in 2014 budgets have not changed much from 2013 costs. Seed and machinery depreciation costs are increased, while all remaining costs are held constant at projected 2013 levels.

Implications of Returns in 2014 Budgets 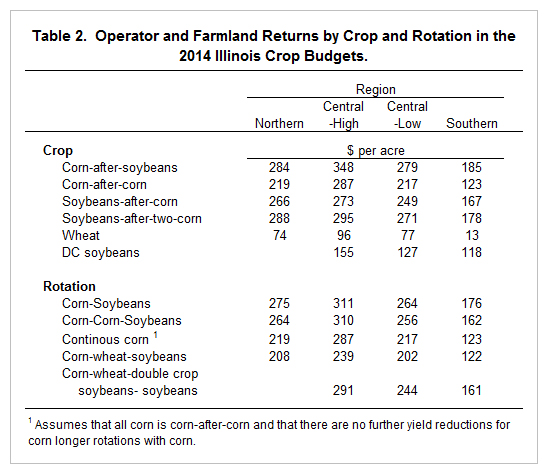 Returns in 2014 budgets suggest returns will be the highest for the corn-soybean rotation in all regions. In northern Illinois, for example, corn-soybeans has a $275 per acre operator and land return, corn-corn-soybeans has a $264 return, and continuous corn has a $219 per acre return. These projected returns could signal a move towards more soybeans in Illinois in 2014.

In southern Illinois, a corn-soybean rotation has the highest return of $176 per acre. Wheat rotations have lower returns. For example, the corn-wheat-double crop soybeans-soybeans rotation has a $161 per acre return. These returns may have implications for wheat plantings in Illinois.

The highest projected rotation returns are $275 per acre in northern Illinois, $311 per acre in central Illinois with high productivity farmland, $264 in central Illinois with low productivity farmland, and $176 per acre in southern Illinois. These operator and land returns are lower than many cash rents being charged in Illinois. Many counties, for example, have average cash rents higher than those shown in Table 1. This may put downward pressure on rents during the upcoming negotiating season.

The 2014 Illinois Crop Budgets have lower returns than received in recent years. This suggests that incomes will be down in 2014 compared to incomes in 2010 through 2012.

Many events will occur between now and the 2014 harvest. Price expectations may change. Moreover, cost expectations, particularly for fertilizer, could vary from those shown in this release of the budgets. These budgets will be updated as market conditions change.

Budgets represent averages across many farms. Individual farms can vary from the budgeted amounts. Farmers should evaluate their own costs contained in budgets.