With RIN markets going wild, the status of available RIN stocks for use by obligated parties towards mandate compliance remains an important issue to regularly monitor. Available 2012 RIN stocks across the biodiesel, advanced, and renewable categories continue to remain close to 2.5 billion gallons, of which 2 billion gallons are D6 RINs which can only be used for compliance with the renewable portion of the RFS mandate. Today’s post looks at 2013 RIN generation data from the EPA through the first half of the year to get a better sense of the likely use of current RIN stock levels in 2013 and carryout of RINs into 2014.

Table 1 above summarizes 2012 RIN generation, use, and current levels of availability across the three D codes based on data from EPA’s Moderated Transaction System (EMTS). These numbers show virtually no change in available RIN levels since the previous update in June (available here). Since obligated parties have until the end of the compliance period to retire RINs for use towards the mandates, it is unlikely these numbers will change significantly until the end of 2013 or early in 2014.

Figure 1 reports renewable (D6) RIN generation relative to the monthly need implied by the renewable component of the RFS2 mandate (annual mandate level for each year divided by 12). Excess D6 RINs were generated throughout 2010 and 2011, leading to the stock levels currently available. Early in 2012, generation averaged very close to the implied need to meet the 13.2 billion gallon mandate level. RIN generation began to fall off as the impact of the 2012 drought set in early during the summer, and production levels continued to decline relative to implied mandate needs through March of this year. Since then, RIN generation levels have increased each month, again approaching mandate requirements in May and June. 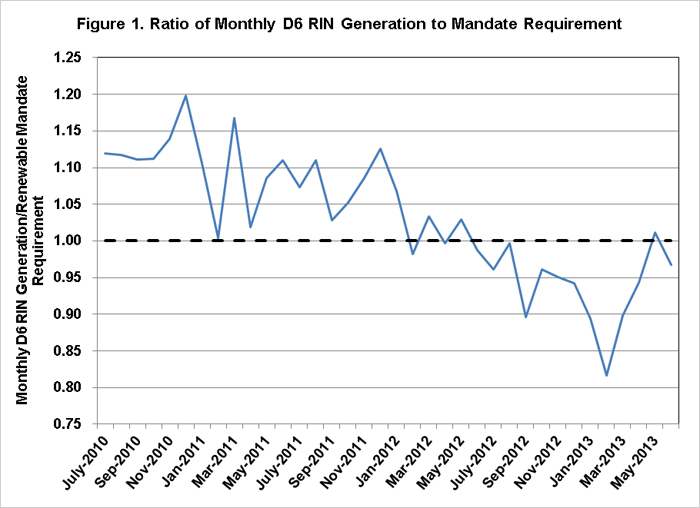 If current RIN generation rates (just over 1.1 billion gallons per month) were maintained through the end of the year, total D6 RIN would reach approximately 13.3 billion gallons for 2013. This would still fall 500 million gallons short of the renewable mandate, but very close to what is estimated to be the E-10 blend wall. Renewable RIN generation and use for compliance beyond these levels would imply the need for increased utilization of higher ethanol blends such as E-15 and E-85.

The projected shortfall for the 2013 renewable mandate could also be met with biodiesel (D4) or advanced (D5) RINs. Figure 2 reports the ratio of D4 and D5 RIN generation relative to the biodiesel and other advanced (undifferentiated) components of the RFS2 mandates. Generation was well below need throughout the last half of 2010 1, with generation increasing and eventually exceeding mandate requirements throughout most of 2011. Generation peaked at the end of 2011, most likely due to the desire to take advantage of the expiring biodiesel tax credit. Throughout 2012, average biodiesel and advanced RIN generation each month exceeded implied mandate needs by approximately 18%, contributing to the current stock levels of available 2012 RINs in the D4 and D5 categories. 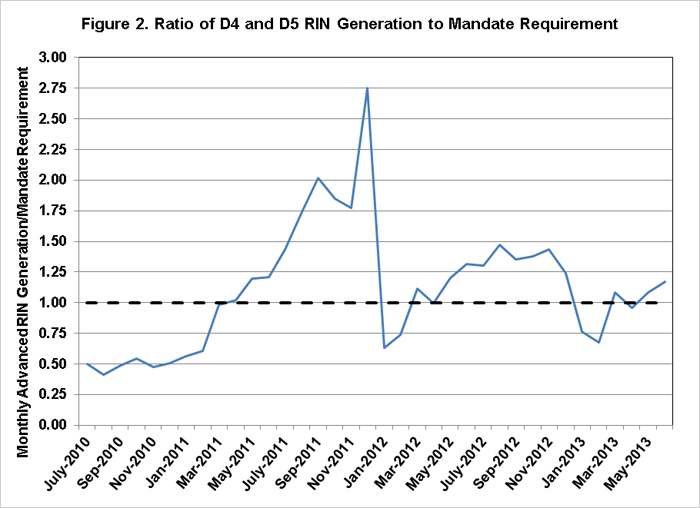 Thus far in 2013, D4 and D5 RIN generation levels have averaged very close to implied mandate needs for the year. Assuming generation remains at this average monthly pace through the end of the year, additional D4 and D5 RINs will not be available for renewable mandate compliance beyond the current level of 437 million gallons reported in table 1.

Current stock levels of 2012 RINs remain at just under 2.5 billion gallons, with just over 2 billion of the D6 category which can only be used towards the renewable component. The pace of D6 RIN generation through June indicates that between 0.5 and 1.1 billion gallons of RIN stocks may be needed for compliance towards the 13.8 billion gallon renewable mandate in 2013. These scenarios could result in the drawdown of 25 to 50% of available D6 RIN stocks.

Alternatively, the projected renewable shortfall could be covered with biodiesel or advanced RINs. Comparing data on RIN generation for these categories thus far in 2013 to implied mandate requirements suggests that stock levels of D4 and D5 RINs will remain close to the current level of 437 million gallons.

The E-10 blend wall remains an important hurdle to RFS2 mandate compliance in the short-term. While the increased use of biodiesel or higher ethanol blends are ways in which mandate compliance can be achieved, RIN generation data through June 2013 suggests that obligated parties may choose to use available RIN stocks for compliance this year.

1 Note that the comparison of biodiesel RIN generation and the implied mandate level in 2010 is complicated by EPA's decision to carry 500 million gallons of the 2009 mandate into 2010. Obligated parties were allowed to apply 2009 RINs, and a limited number of 2008 RINs towards the 2010 mandate level.