Illinois FBFM Association and Department of Agricultural and Consumer Economics

Todays’ post will use a data set that covers a 20 year period and will consider how accrual net farm income is influenced by farm type.

Accrual net farm income includes all farm cash income as well as adjustments for changes in: 1) grain, forage and livestock inventories, 2) accounts receivable, 3) accounts payable, and 4) prepaid expenses. Accrual net farm income is a more accurate representation of the true amount of farm earnings achieved as it pairs up the income from a crop year and the expenses associated with the production of that income. 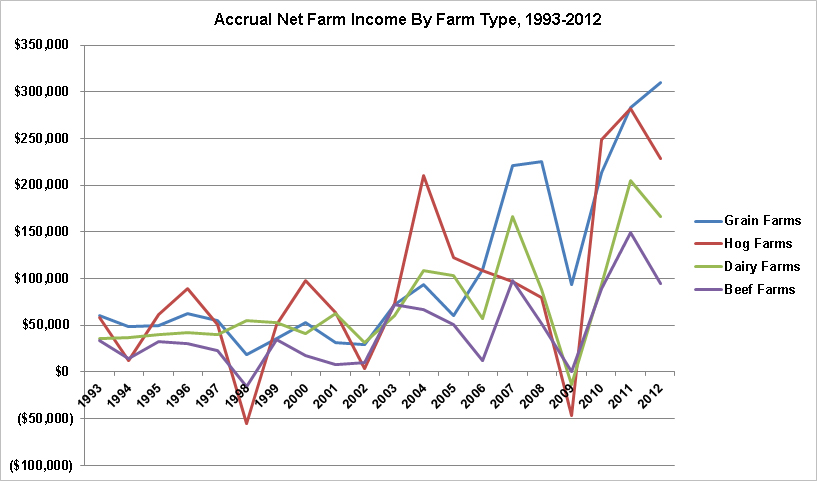 Net farm income on hog farms ranged from a low of -$54,878 in 1998 in the depths of low hog prices. 2009 recorded the second lowest net farm income at $-$47,105. The low 2009 earnings would have been influenced by feed prices and even 2002 produced the third lowest level of income to hog farms. The high year for hog farms was in 2012 with a high of $281,602. Note that these hog farms are not ‘hog only’ by the formula used to determine type so the returns to the crop acres tended to pull up the farm returns.

Beef farms represented by cow-calf herds and feeder cattle finishing enterprises ranged from a low of -$15,069 in 1998 to a high of $149,326 in 2011. Beef farms had their third lowest net farm income year as recent as 2009 while under the pressure of high feed prices.

A statistical measure, the coefficient of variation (CV), reveals that the volatility in net farm income exceeds 85% for grain farms (85%), hog farms (99%), and beef farms (93%) over the 20 year period. Dairy farms with a coefficient of variation at 73% indicates that net farm income levels for farms with a dairy enterprise tend to be more steady from year-to-year as compared to the other farm types.

In general, farm incomes have been at higher levels since the 2005/2006 era when the ethanol mandate was put in place. Higher corn and soybean prices have led grain farms to higher income levels as compared to farms that had a significant livestock enterprise. Higher feed costs have led to lower levels of income on farms with a livestock enterprise. In general, hog farms have had an increased level of earnings as compared to either dairy or beef farms.