Perhaps the only common causative factor associated with periods of U.S. farm prosperity since 1900 is the role of exports. World War I and II led to farm prosperity in the U.S. as it exported food to its allies and subsequently to war-ravaged countries. A key causative factor in the 1970 period of prosperity was the Soviet Union’s decision to import agricultural products for its consumers. Exports have played a key role in the current period of prosperity, with China being the most prominent importer. Notably, China has expanded its imports of oilseeds, principally soybeans. Expressed as the number of acres calculated using average U.S. yield per planted acre for 2008-2012 (41.2 bushels per acre), China’s soybean imports from the rest of the world grew from 11.8 to 52.8 million acres between crop years 2000/2001 and 2011/2012. Magnitude of this growth reflects China’s rapid economic growth interacting with a population of approximately 1.4 billion in 2011.

The data for this post come primarily from 2 sources: (1) the United Nations, Food and Agriculture Organization (FAO) FAOSTAT database, available here, and (2) the International Monetary Fund (IMF) World Economic Outlook Database website, available here. FAO is the source for data on food consumption and population. IMF is the source for data on gross domestic product. The analysis uses data from 1980 and 2009 — 1980 is the first year that IMF reports data on GDP while 2009 is the last year for which data on food consumption is available. Also, 1980 is close to the beginning of China’s transformation from a communist to a more market-oriented economy.

Although the food transition is tied to economic development and thus to the passage of time, its features can be illustrated with a cross-sectional picture of food consumption at a point of time, where the cross section is by country. Figures 1 through 3 contain this cross-sectional picture for 2009 for the consumption attributes examined in this post. A country’s per person income is measured using its GDP measured in current prices and 2009 U.S. dollars.

Caloric intake (see Figure 1) and consumption of animal protein (see Figure 2) increase as per person income increases. However, the relationship does not continuously increase. In 2009, total caloric intake appears to plateau around 3,500 per day while total animal protein consumed appears to plateau around 65 grams per day. The relationships depicted in Figures 1 and 2 are referred to as logarithmic. The correlation with the logarithm of income per person is +0.79 for calories and +0.88 for animal protein. These are high correlations (+1.0 is a perfect correlation). 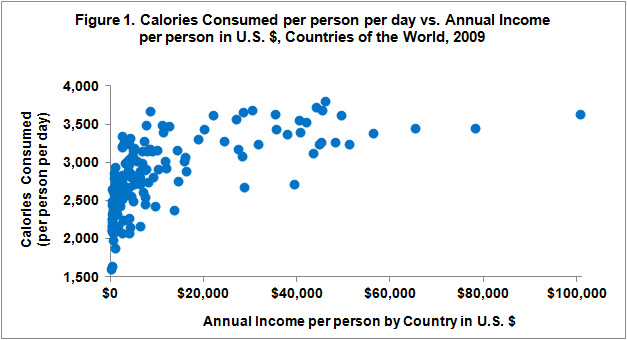 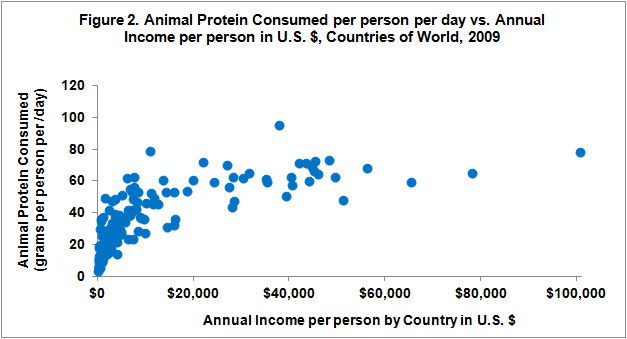 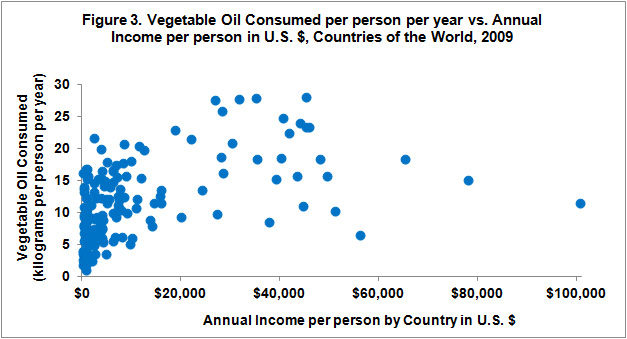 A plateau indicates an upper limit, but a plateau may change over time. For example, in 1980, the plateaus were around 3,200 calories per day and 60 grams of protein per day. Thus, between 1980 and 2009, the plateau increased by 9% for calories and 8% for animal protein.

Food consumption plateaus are associated with what economists call Engel’s Law. It states that, as income increases, a smaller share of a person’s budget is spent on food. However, the graph for vegetable oil suggests plateaus are less clear for individual foods than for broader food categories.

China’s increased demand for food has been a key driver of the current period of farm prosperity. China’s food transition has likely passed the halfway mark, but China will still need increased imports of food, particularly if its growth in production does not continue or even accelerate. However China’s food transition is likely leaving the era of a broad increase in demand across all categories of food to a more selective growth in demand focused on certain products. For example, China’s demand for animal protein will continue to increase but dairy products, beef, and poultry may account for a larger share of this increase going forward. In fact, because of differences in feed efficiency, China could probably increase animal protein consumption within increasing imports of feed ingredients by shifting production from pork to poultry and dairy products.

Because China is likely entering the second half of its food transition, China’s demand for food imports will likely grow slower in the future. Moreover, China’s population will likely peak sometime between 2025 and 2030, then begin a slow decline. Also, many observers believe China’s economy is unlikely to grow faster than 7% to 8% per year and may grow slower. In contrast, between 2005 and 2012, China’s economy grew at an average annual inflation-adjusted rate of 10.5% per year. While it seems likely China will remain a large and growing consumer of food, China’s slower growth in demand for food could lead to a downward pressure on prices whenever world production of farm products is not disrupted by weather or other factors.

The next post in this series will examine the demand for biofuels.