In the August 1st Illinois Production Cost Report, the U.S. Department of Agriculture reported an average Illinois price for anhydrous ammonia of $793 per ton, a diammonium phosphate (DAP) price of $558 per ton, and a potash price of $541 per ton. These prices are down over 5% from two-week earlier prices. The downward movement in prices holds the promise that fertilizer costs in 2014 will be lower than those in in recent years.

Impacts on Per Acre Fertilizer Costs 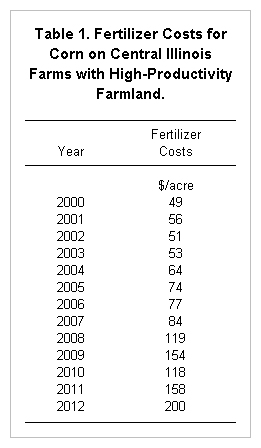