The US Congress has failed to pass a new farm bill and uncertainties surrounding the final composition of the bill remain. The largest parts of the farm bill, comprising about 80% of total spending, are food nutrition and assistance programs, particularly the Supplemental Nutrition Assistance Program (SNAP), otherwise known as “food stamps.”

The US House of Representatives passed a version of the farm bill excluding SNAP. The decision to “unbundle” farm and food assistance spending came about because of disagreements over the size of the cuts to SNAP and new proposed work requirements. The House subsequently passed a separate bill funding SNAP, but it is unclear whether a Senate-House committee can combine the two into one omnibus farm bill. A key difference between the Senate and House versions of the farm bill is the size of the cuts to SNAP.

As a part of the monthly Food Demand Survey (FooDS) conducted at Oklahoma State University, a new question was added in October to gauge public opinion on the issue (more details on FooDS can be found here and previous releases are available here). The precise wording of the question was as follows:

Both Houses of the U.S. Congress are considering changes to the Supplemental Nutritional Assistance Program (SNAP), otherwise known as the “food stamp” program, in the latest version of the farm bill. Do you support or oppose each of the following proposed changes to the food stamp program? (For reference, current versions of the farm bill are projected to cost about $950 billion over ten years, with about 80% being spent on food stamp and nutritional programs; over 47 million people (or 15% of Americans) are today on food stamps, an 80% increase since 2007; average benefits are $133/person/month.)

Then, eleven issues were listed in random order. For each issue, respondents indicated “support” or “oppose.”

Results from over 1,000 responses weight to be demographically representative of the US population are below. The sampling error is +/- 3%. 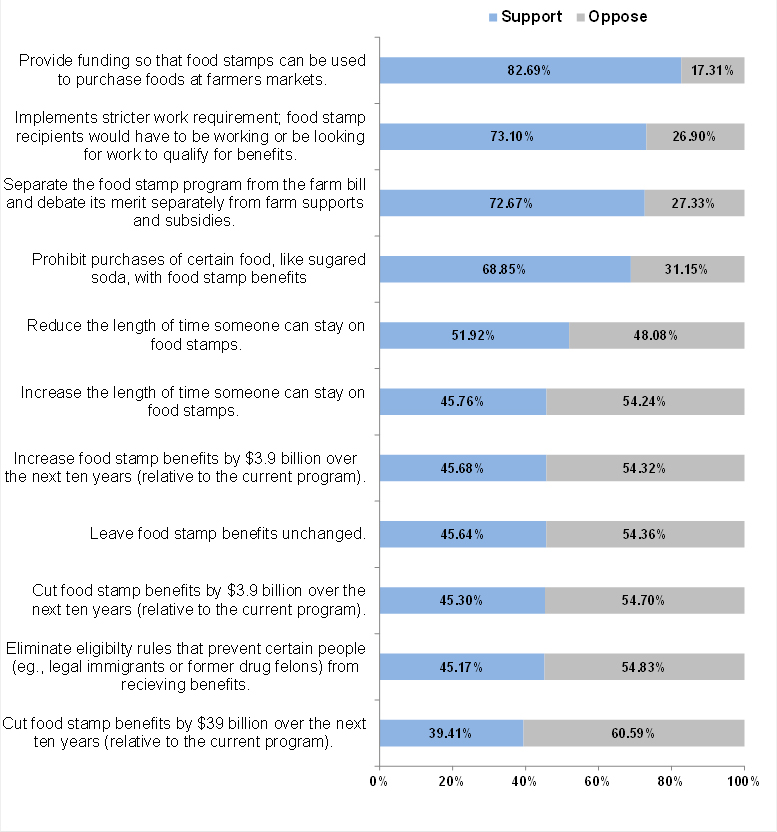 Almost three quarters of respondents (72.67%) supported the House’s decision to separate the SNAP program from the rest of the farm bill. High levels of support were also witnessed for what might be considered paternalistic changes to the SNAP program – using the program to encourage farmers market purchases, restricting purchases of sodas, and encouraging work. The least popular alternatives were large ($39 billion) cuts to the program and elimination of eligibility rules.

About 14% of the sample of respondents stated that they were currently on food stamps, which is approximately equal to the national participation rate. About a third of responds responded affirmatively to the question “have you ever been on food stamps?”

Uncertainties surrounding the future of farm policy remain but these results provide some insights into which policies are likely to be most popular in public opinion. Although there is little support for large cuts in benefits, moderate cuts are more palatable. Moreover, there are issues such as adding work requirements, reducing the length of participation, and maintaining eligibility rules that have budgetary implications and that are popular in public opinion. While the House decision to decouple farm programs from SNAP may ultimately cause a break down in the urban-rural political coalition that has held together the farm bill for decades, it is a move that the vast majority of Americans support.