The EPA’s 2014 proposed rule for the RFS sets large volumes of biofuel use across several broad categories of fuel types but represents a significant reduction in mandated volumes from legislated levels.  The EPA has once again proposed to significantly reduce the cellulosic mandate (from 1.75 billion gallons to just 17 million gallons) but, in contrast to previous years, has also proposed to reduce the overall mandate by more than 3 billion gallons. Under the proposed volumes, biofuel prices and the blend wall will largely determine a fairly narrow range of about 460 million gallons – about a day and a half worth of US motorfuel consumption – where much of the action in the biofuels market is likely to occur. It is this volume which will intersect the blend wall, influencing RIN prices and where biodiesel, corn ethanol and sugarcane ethanol imports will face off.

The proposed rule puts forth a complex calculation of alternative probabilities in order to set the mandate levels. The complexity of the EPA’s calculations may give rise to a sense of precision in the various volumes outlined, however significant uncertainty remains with different potential mandate volume outcomes highly interdependent.  Despite this, the method the EPA has come up with in determining the mandate levels for the various biofuel categories can be boiled down to what is a fairly simple rule which takes into account their assumptions about the industry’s  underlying ability to produce and blend each type of biofuel and the public’s ability to utilize those fuels.

Proposed mandate levels for 2014 are summarized in table 1. The EPA has set the proposed biofuel mandate for 2014 at the current year’s level of 1.28 billion volumetric gallons (1.92 billion EV gallons). The EPA then included additional non-ethanol fuels which they feel are likely to be produced. Finally, the assumed amount of ethanol that can be consumed under the blend wall via E10 and E85 consumption is included to arrive at the total proposed mandate level of 15.21 billion gallons for 2014.

The proposed cellulosic mandate has been set at anticipated domestic production of 17 million gallons and is, in essence, so small as to not significantly impact the process of setting other or overall mandate volumes. The split between advanced and non-advanced biofuels, which determines the maximum potential share of corn-based ethanol, appears to have been set by adding the estimated non-ethanol advanced biofuel available to the biodiesel mandate, resulting in a total advanced component of 2.2 billion gallons. The remainder – 13.01 billion gallons – is corn ethanol’s maximum potential contribution toward the RFS (table 1). 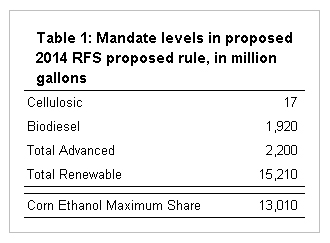 The EPA calculates what they anticipate to be the blend wall, or the maximum absorption of ethanol likely to occur in 2014 of 13.021 billion gallons of ethanol. That includes 12.841 billion gallons consumed in E10 blends, 0 gallons consumed as E15, and 0.180 billion gallons consumed as E85. Taking the difference between the 15.21 billion gallon total mandate and the 13.021 billion gallon blend wall and the 1.92 billion EV gallons of biodiesel leaves approximately 280 million gallons of other non-ethanol advanced fuels which will be needed for compliance in 2014. It is worth noting here that not all biodiesel is created equal and does not include all the same set of fuels in all legislation. To qualify for the biodiesel mandate (generates D4 RINs) the fuel must meet very specific criteria. Other biodiesel can be produced but because it lacks some of these characteristics, may only qualify for the broader advanced (D5 RIN) or even conventional (D6 RIN) mandate. At the same time, all of these fuels may be receiving the $1.00 per gallon biodiesel blenders’ credit which expires on December 31, 2013. 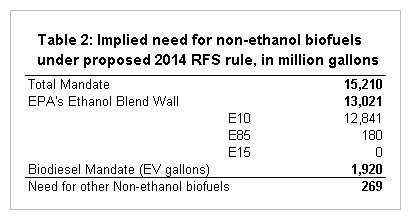 At a blend wall level of 13.021 billion gallons, the potential for sugarcane ethanol imports from Brazil may be very narrow unless it is priced under domestic corn-based ethanol. Brazilian ethanol imports could fall to as low as 10-20 million gallons, Imports could be higher, displacing some corn ethanol production, driven mainly by state level policies such as California’s Low Carbon Fuel Standard (LCFS). The rest of the advanced fuel category will likely have to come from biodiesel (D4 RIN) or other non-ethanol fuels. That market situation is depicted below in figure 1. 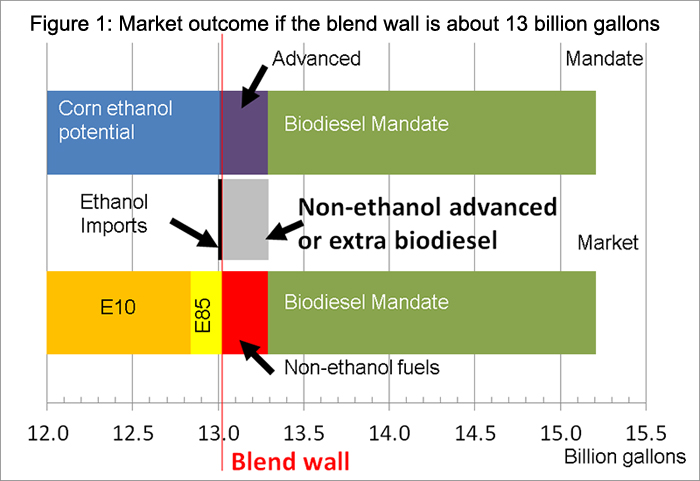 If the actual level of the blend wall is higher than EPA’s calculation, depicted in figure 2 with an assumed blend wall of 13.2 billion gallons, it may not be domestic corn ethanol that will directly benefit since the non-advanced portion of the proposed mandate is capped at 13.01 billion gallons. What would qualify to meet this mandate are imports of sugarcane ethanol, which could in turn displace biodiesel production (D4 and D5) and blending beyond its own mandated levels. That is, an expansion of the blend wall from EPA’s assumed level will likely benefit ethanol importers and displace biodiesel in the market place in 2014, but could potentially result in a higher total mandate calculation in the following year. Note that market conditions could promote corn ethanol production beyond the RFS needs, but the excess production would need to be exported due to the blend wall. 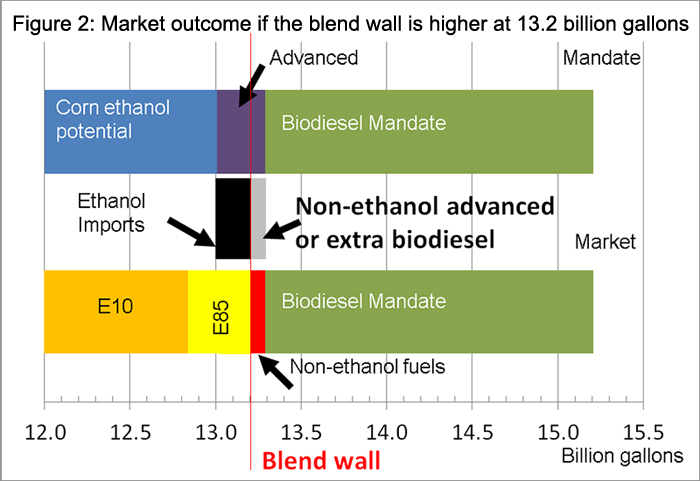 Alternatively, if the EPA’s estimates of the potential for E85 consumption are too high and the actual blend wall is lower than the estimated13 billion gallons, then the potential use of domestic corn ethanol would be reduced. That is depicted in figure 3 with a lower blend wall level of 12.9 billion gallons. Furthermore, any RFS-related incentives to import sugarcane ethanol would be reduced unless it was priced below domestic ethanol which would further crowd out demand for domestic corn-based ethanol. Biodiesel of all types and other non-ethanol fuels would be required to ‘backfill’ this additional need for mandate compliance driven by the tighter blend wall level. 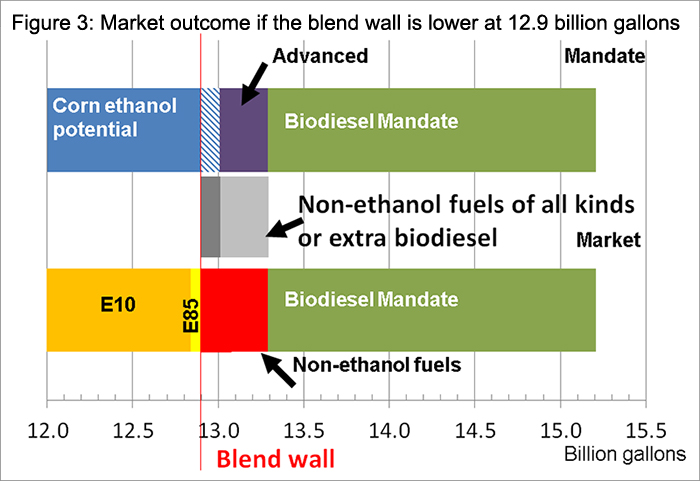 Regardless, corn ethanol use for RFS compliance would be excluded from filling the entirety of this 460 million gallon gap, and thus is really only exposed to the 180 million gallons of E85 consumption uncertainty – or about 67 million bushels of corn consumption (180 million gallons/2.7 gallons per bushel).  Furthermore, if market conditions arise which provide incentives for obligated parties to use existing RIN stocks rather than physical ethanol production and blending, the demand for corn for ethanol use could be further limited.  The minimum amount of production next year can be estimated by assuming the use of all carryover RIN stocks in 2014.  That would result in corn ethanol production of about 11.7 billion gallons and biodiesel production of 1 billion gallons.

In their proposed rules for 2014, the EPA has once again chosen to waive the majority of the cellulosic biofuel mandate level outlined in the original legislation.  However, in contrast to the waivers put forth over the past few years, they have also chosen to write down the total mandate level by more than 3 billion gallons from the legislated level in response to the the ability of the market to consume ethanol; i.e., the blend wall.

That has a created a fairly narrow band of uncertainty surrounding 460 million gallons of the 15.21 billion gallon proposed mandate, consisting of 180 million gallons of expected E85 use and 280 million gallons of non-biodiesel advanced biofuels.  Depending on the actual level of the blend wall, the potential for sugarcane ethanol imports from Brazil could be significantly reduced, the potential corn-for-ethanol could be further reduced beyond the volume already implied by reducing the overall mandate, and the potential role of biodiesel blending to meet the RFS mandates in 2014 could expand. Blending margins in 2014, which will determine the profitability or economic cost of physically blending biofuels, will be other major factor next year given the potential use of accumulated RIN stocks towards mandate compliance.