In a 2008 report and in subsequent articles we argued that corn, soybean, and wheat likely entered an era of higher prices beginning in late 2006.  The “new era” of prices was associated mostly with the rapid expansion in biofuels production, particularly corn-based ethanol.  Based on the level and pattern of average monthly prices received by Illinois producers in two previous price eras–January 1947 through December 1972 and January 1973 through November 2006–we projected three aspects of crop prices in the new era that began in December 2006.  These were 1) average price, 2) the range in average monthly prices, and 3) the distribution of average monthly prices.  An   assessment of those projections was provided earlier this year here and here.

There is a fourth aspect of price patterns that is important, but not included in our previous analysis.  That aspect is the persistence of prices at “high” or “low” levels.  While the average level and range of prices over time is extremely important, those aspects exclude the potential for lengthy runs (streaks) of prices above or below the average price. Such runs have important risk management implications for corn and soybean producers. This aspect of prices seems to be especially relevant now since the prices of corn and soybeans have been above the average expected price in the new era for the past three years and corn prices have now moved below that expected average.  A farmdoc daily post earlier this week by Gary Schnitkey showed that corn prices are also now close to breakeven levels, which provides further motivation for studying patterns of runs in corn and soybeans prices.

Here, we examine average monthly prices of corn and soybeans received by Illinois producers in the previous era from January 1973 through November 2006 for clues as to the number and pattern of consecutive months of prices above or below the average price that we can expect in the new era that began in late 2006.  Of course, there is the usual caveat that history never repeats itself exactly the same way twice and there are significant differences in the market environment between the previous era and the unfolding new era.  In particular, many aspects of federal commodity policy have changed, such as the acreage set-aside and grain reserve programs that were a staple of the previous era.  These programs almost certainly kept prices from going even lower at times, while simultaneously lengthening runs of low prices as reserve stocks accumulated.  Nonetheless, we argue that historical patterns in the previous era of January 1973-November 2006 provide useful guidance for expected price patterns in the new era and some insight to help manage the risk associated with those patterns.

The pattern or price runs above and below average for corn and soybeans in the previous era is generally observable in Figures 1 and 2, respectively. The characteristics of the runs are more clearly summarized in Figures 3 and 4. The horizontal axis lists the sequence number for all of the runs of prices above or below average in the previous era for corn or soybeans.  So, there were 38 separate runs of prices above and below average for corn and 39 for soybeans.  Since the number of months in each run may vary, the height of each bar represents that number.  Note also that a positive number indicates the number of months above average and a negative number indicates months below average.  While the order of the sequence of runs is preserved in Figures 3 and 4, the actual dates for each run are not provided.  These can be approximately determined by examining Figures 1 and 2.  Please also note that the pattern of reversals between positive and negative runs in Figures 3 and 4 is by construction and has no predictive content.  By definition, a positive run must be followed by a negative run, and vice versa. 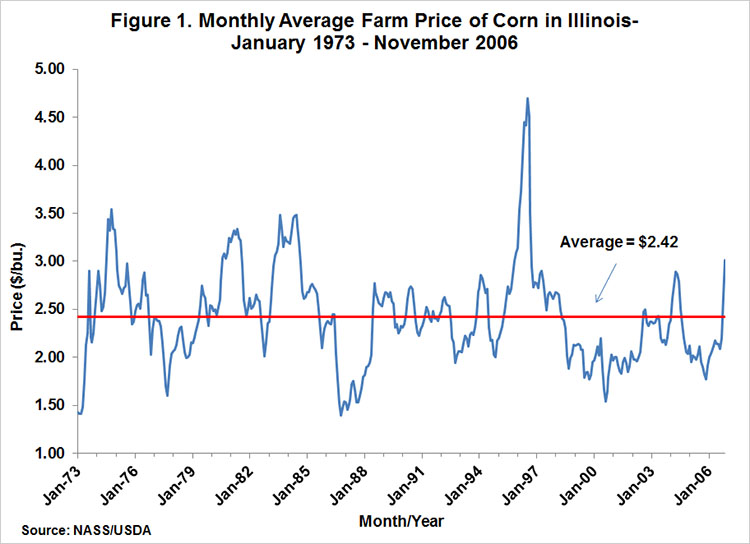 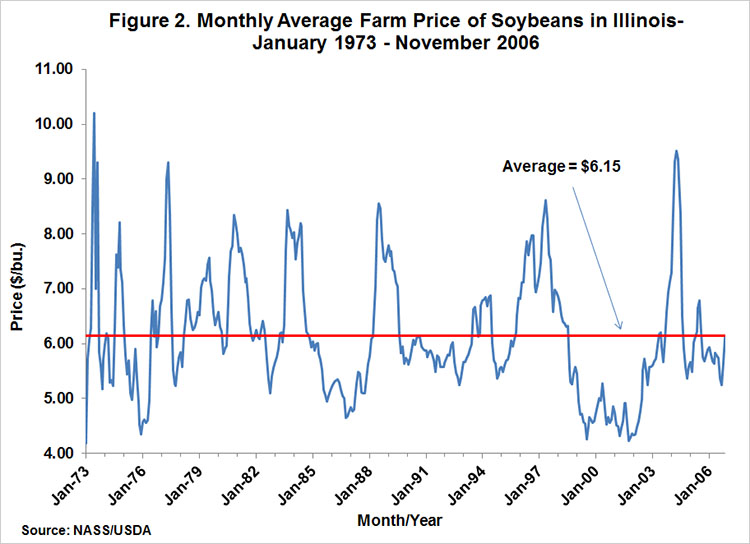 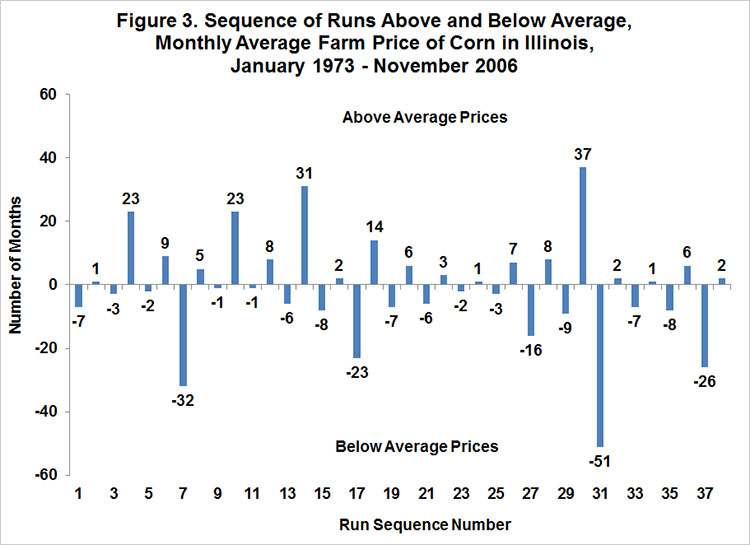 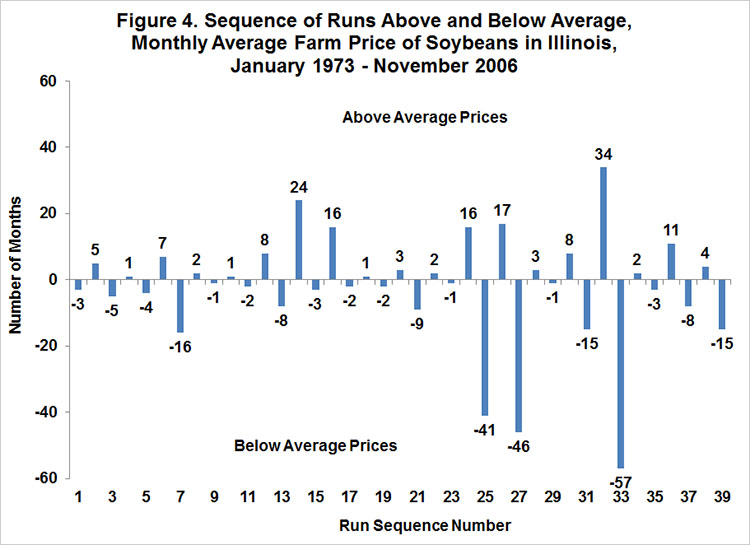 Based on Figures 1-4, the following observations for the pattern of price sequences in the previous era can be made:

The previous analysis of runs in the earlier era provides useful historical context when considering price patterns to date in the new era.  While we do not know how long the new era of corn and soybean prices that started in December 2006 will last or what the actual average price will be during this still unfolding era, we do now have 82 months, or almost 7 years, of data that can be analyzed.  In Figures 5 and 6 we show average monthly prices received during the December 2006 through September 2013 period (the latest month for which averages are available) along with two averages. 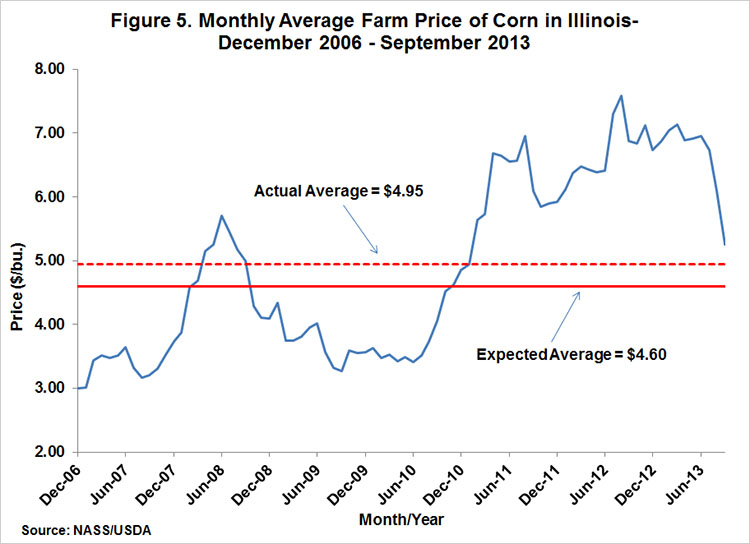 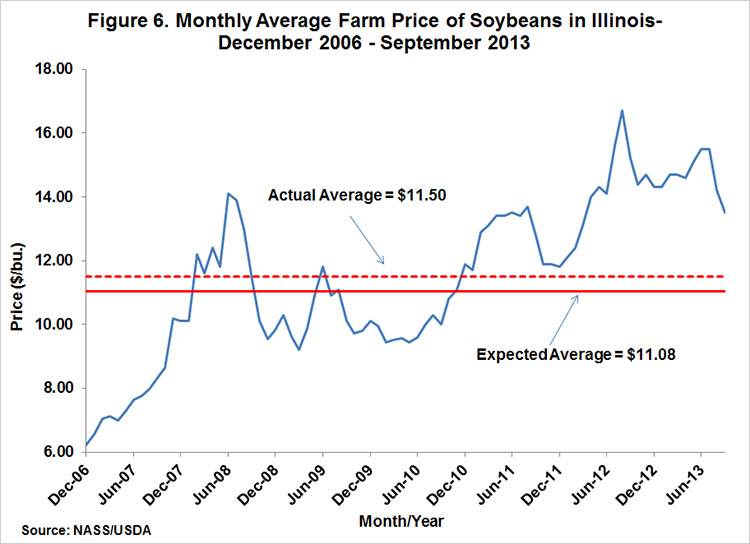 The higher average for both corn and soybeans is the actual average for the period while the lower average is the average we have forecast for the new era, however long it lasts. This period of 82 months has been characterized by extended periods above and below the average forecast price. Relative to the forecast average price, the average monthly price of corn starting in December 2006 showed the following chronological pattern:

The pattern for soybeans has been more diverse.   Relative to the forecast average price, the average monthly price starting in December 2006 was as follows: