In yesterday’s daily post (available here) Scott Irwin highlighted the production responsiveness of the biodiesel industry. Motivations for this ramp up in production include the blenders tax credit being reinstated for 2013, the increase in the biodiesel component of the RFS mandate from 1 billion gallons to 1.28 billion gallons, and the potential use of “extra” D4 biodiesel RINs in meeting the advanced and renewable RFS mandate components. Today’s post focuses on the potential impact this increase in RIN generation may have in generating RIN stocks for carry over into 2014.

Figure 1 uses data from EPA’s EMTS to plot monthly D4 RIN generation relative to implied mandate needs (annual mandate/12) from July 2010 through August 2013. RIN generation has exceeded implied mandate needs for 2013 since March, and has followed a pattern similar to that experienced in 2011 under similar blender’s tax credit circumstances. Using the average production level over the most recent three months (June, July, and August) to project monthly totals through the end of the year results in an estimate of total D4 RIN generation in 2013 of 2.62 billion RIN gallons (1.75 billion volumetric gallons). 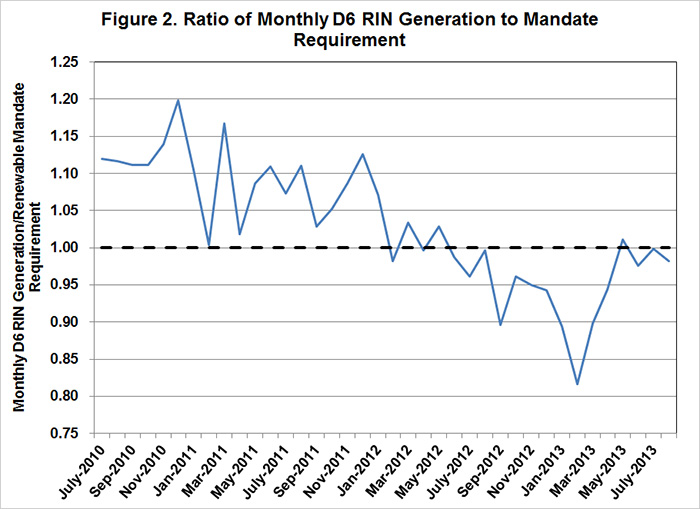 Table 1 provides estimates for 2014 RIN carry-in, or RIN stocks which are estimated to be rolled over for use in RFS compliance next year. These estimates are based on the projections for total RIN generation in 2013 in addition to the following assumptions:

Two estimates for 2014 carry-in levels are provided. Potential carry-in, estimated as 2013 carry-in plus net generation less the 2013 mandate level, does not impose the 20% rollover limit. The total advanced mandate of 3.75 billion gallons would only allow for 0.75 billion gallons of the advanced (D3, D4, and D5) RINS to be rolled into 2014. The limited carry-in estimate applies the 20% rollover limits to the potential carry-in estimates and suggests that while total rollover will not exceed the limit, some of the advanced RIN categories rolled into 2014 may have to be “demoted” and applied towards other mandate categories. 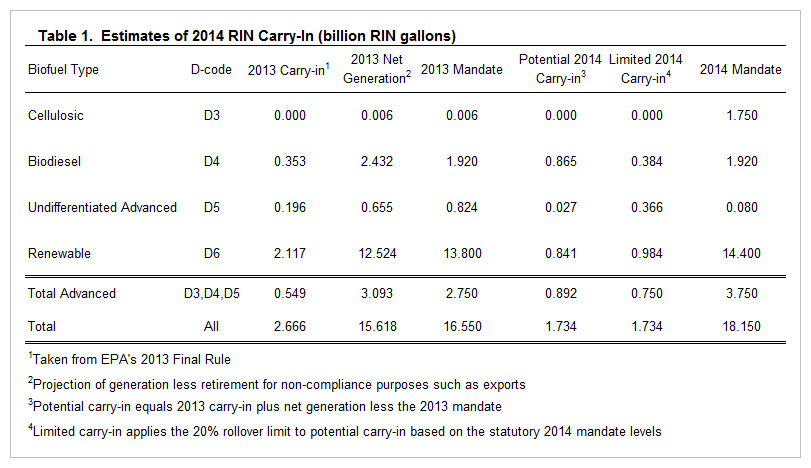 Totaling up potential carry-in for 2014 yields 1.734 billion RIN gallons across the D4, D5, and D6 categories, which is less than 20% of the total mandate of 18.15 billion gallons for 2014. However, total advanced rollover (892 million gallons) does exceed 20% of the advanced portion (0.20*3.75 = 0.75 billion gallons). In applying the rollover limits, it is assumed that obligated parties prefer to hold RINs with lower D-codes (i.e. preference for a D4 over a D5 or D6) due to the added flexibility they provide for mandate compliance.

The final column in table 1 provides the 2014 mandate levels as outlined in the RFS, along with the assumption that the biodiesel mandate remains at 1.28 billion volumetric gallons (1.92 billion RIN gallons). Carry-in of 750 million advanced RINs would require net generation next year of at least 3 billion advanced RINs. This could be achieved with D5 generation at projected 2013 levels of 650 million, and D4 generation of 2.35 billion gallons or roughly 1.6 billion gallons of biodiesel production. Note that this assumes the cellulosic mandate is again waived down to nearly zero, but the total advanced mandate remains at 3.75 billion gallons for 2014.

D6 RIN generation requirements for 2014 would be estimated at more than 13.4 billion gallons. Assuming all D6 and D5 RINS represent ethanol (produced from either corn or sugar cane), this would require ethanol blending in 2014 of approximately 14 billion gallons (13.4 billion plus the 0.65 billion advanced gallons), which exceeds EPA’s blend wall estimate for 2014 (available here, pg. 49823) by 800 million gallons. This 800 million gallon gap would need to be met with D4 RINs generated from additional production of biodiesel or increased use of higher ethanol blends such as E85. The use of additional biodiesel for the entire gap would require another 500 million gallons of production, pushing total biodiesel production to more than 2.1 billion gallons, approaching the 2.2 billion gallon industry capacity assumed in EPA’s 2013 final rule. Note also that this assumes that RIN stock levels are driven to zero; ethanol and/or biodiesel blending would have to be larger to allow for any carry-in for 2015.

The recent increase in U.S. biodiesel production and, as a result, D4 RIN generation is estimated to lead to a surplus of D4 RINs for 2013 and a total RIN carry-in of more than 1.7 billion gallons across all D-codes for 2014. Thus, the ramp up in biodiesel RIN generation as producers take advantage of 2013 market conditions, including the blender’s tax credit, is generating a surplus of D4 RINs which could relax blend wall constraints in 2014. Furthermore, at this level of carry, the statutory advanced mandate for 2014, including the portion currently designated for cellulosic, could be met with biodiesel and advanced RIN generation levels similar to those projected for 2013.

However, the remaining renewable mandate requirements would still exceed the E10 blend wall by approximately 800 million gallons. This gap could be filled by increasing biodiesel production near estimated industry capacity in 2014, increased use of higher ethanol blends, or a combination of both.

There has been considerable scrutiny over the EPA’s discussion of the potential for a waiver on the total mandate to address difficulties related to the ethanol blend wall (see post here for more discussion). The estimates for 2014 RIN carry-in provide some insight into the likelihood and potential size of such a waiver for next year. Note that the estimates discussed here are based on a number of assumptions. Actual RIN generation levels for 2013 could vary from the projections used to estimate RIN carry-in for 2014, and the resulting generation needs to comply with the mandates ultimately implemented in 2014.