On October 23, 2013, the lead author published a farmdoc daily post titled, “Putting the Age of U.S. Farmers in Perspective,” available here.  It has generated considerable attention.  This follow-up post adds another perspective to this discussion by focusing on one finding from a survey published in the “Attributes of U.S. Farms by Number of Generations the Farm has been in a Family,” Journal of the American Society of Farm Managers and Rural Appraiser, 2004, available here.  This article contains more details about the survey and the findings from the survey.

The survey was a random sample of farmers in 26 states during 2001.  Responses were weighted based on the survey methodology to generate a population estimate for each state.  The state estimates then were summed to obtain estimates for the 26 states as a group.  The 26 states contained 1.4 million farms, or 64% of all U.S. farms in the 2002 Census of Agriculture.

The survey question of interest in this post is what family generation does the current operator represent on the farm or ranch?  No other information was provided.  Thus, respondents in the same objective situation could have answered the question differently depending on their interpretation of their specific situation.  Despite its subjective nature, the question allows the farmer respondent to provide an indication of how long the farm has remained in the family across generations. 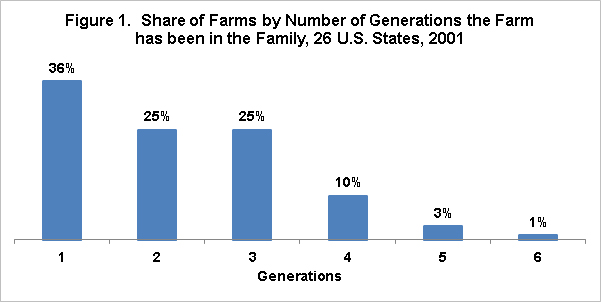 Farm culture emphasizes the role of family generations.  However, this survey found that 1st generation farms occupied an important place in the U.S. farm sector in 2001.  There is no reason to believe that this situation has changed appreciatively

The relatively large presence of 1st generation farms in this study suggests that entry into U.S. farming is not as difficult as conventionally presented.  This does not mean it is easy.  Nevertheless, the entry of more 1st generation farmers is another reason for believing that the next generation of farmers may be easier to find than some suggest.