This is the third of a five part series dealing with controlling costs on grain farms.

Per acre direct costs related to corn and soybean production have increased over 100% from 2006 to 2012.  Except for fertilizer, components of direct costs are not expected to decrease without altering input decisions.  Input changes may be warranted given lower commodity prices.  Even given possible direct cost reductions, further reduction in costs likely are needed, most likely coming from machinery costs and cash rents.

Direct costs are directly attributable to a crop and include fertilizer, pesticides, seed, drying, storage, and crop insurance.  Historical time series from 2006 to 2012 of direct costs are shown in Table 1 for corn and soybeans grown on high-productivity farmland in central Illinois. These costs are summarized from farms enrolled in Illinois Farm Business Farm Management. Viewing these series allows evaluations of trends in direct costs. 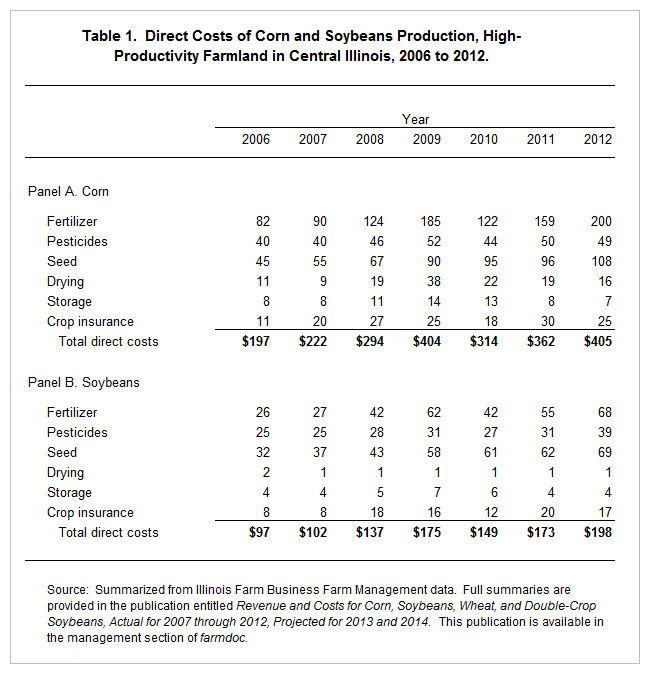 Except for fertilizer, price decreases for inputs will not likely lead to decreases in direct costs.  Farmers may need to evaluate input decisions.  The value of higher cost seed hybrids and varieties will have to be questioned.  Fertilizer rates will come under scrutiny.  Each Insecticide and fungicide application will have to be evaluated.

In each of these examinations, the lower commodity price environment will place pressure on moving to lower cost inputs, lowering rates, or eliminating applications.  This occurs because lowering commodity prices increases the bushel response needed to break-even.  As an example, take an input that has a $20 per acre cost.  This input could be a fungicide application, the increased cost for a particular hybrid, or an increase in a fertilizer rate.  If corn prices are expected to be $6.50 per bushel, an increase in yield of 3.07 bushels per acre are needed to justify the input ($20 cost / $6.50 per bushel corn price).  At a $4.50 corn price, 4.4 bushels of additional yield are needed to justify the input.