A report from the NOAA Drought Task Force last week about the origins of the 2012 Great Plains drought has generated considerable interest and discussion. The authors of this report concluded that the drought was largely unpredictable based on conditions even a few weeks ahead of the onset of the drought and that it was unlikely to be related to global warming. It also highlighted the devastating impact of the drought conditions on corn yields, an issue we discussed in farmdoc daily posts last summer and fall (here and here). The availability of final corn yields for 2012 provides an opportunity to provide further historical perspective on the full impact of the drought on corn yields.

The starting point for the analysis is to separate out non-irrigated and irrigated corn yields for the U.S. It is not often noted but a substantial amount of U.S. corn production is irrigated and therefore largely insulated from drought conditions. Figure 1 shows the share of U.S. corn acreage harvested for grain that is irrigated. The share was in the low single digits in the early 1960s but grew rapidly to a peak of about 13% by the mid-1990s. The share has subsequently dropped in recent years to about 10% of harvested acres. Even with the decline irrigated harvested acreage is still substantial, totaling 8.764 million acres in 2012. 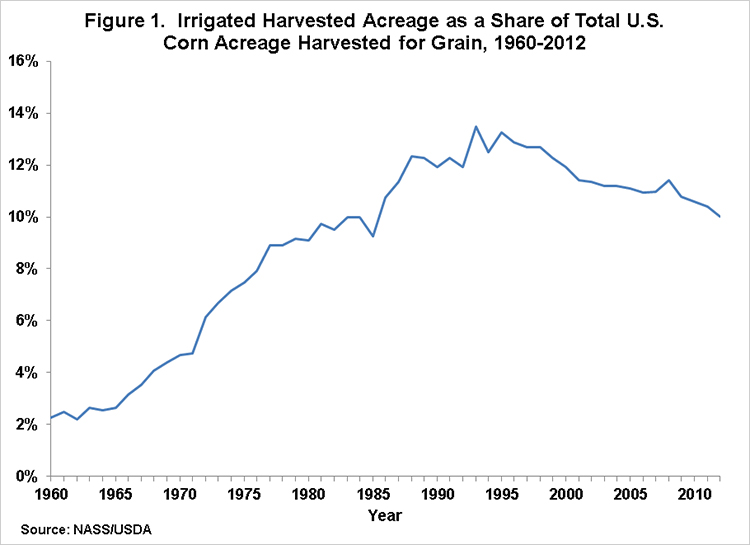 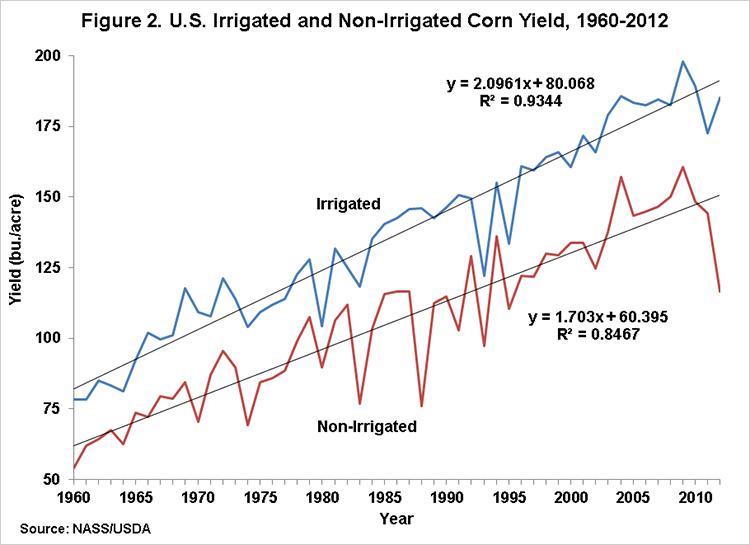 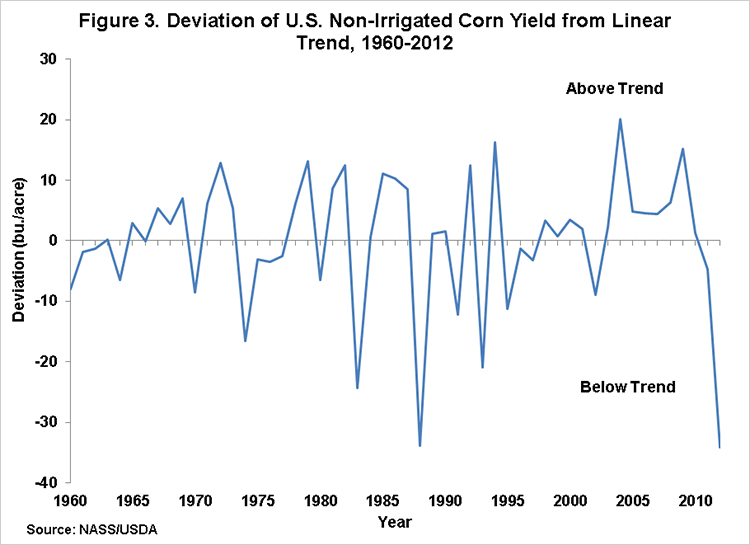 One final issue is whether trend deviations should be computed in bushel or percentage form. If one computes percentage deviations from the non-irrigated corn trend then 2012 does not look quite as dire. The percentage deviation in 2012, -29.3%, is only the third worst of the last half-century and considerably smaller than the -44.5% shortfall in 1988. There is no obvious answer which form of deviation is correct. If one believes that the corn trend is a constant bushel increase then the linear trend presented in Figure 2 is valid. If on the other hand one believes that the corn trend yield is a constant percentage increase then a log-linear trend model (take logarithm of yield before regressing on time index) should be used. We lean here towards the linear trend formulation because the range of trend yield deviations in bushels does not expand across time as one would expect if a log-linear trend model is the better specification.

The 2012 drought in the U.S. devastated non-irrigated corn yields. Depending on the measure of trend deviation, the drop in yield relative to trend was either the worst in the last half-century or in the top three. This is an important data point with respect to the ongoing debate about the drought tolerance of U.S. corn production. Regardless whether drought tolerance has actually improved, 2012 demonstrated in rather spectacular fashion that widespread drought leads to sizable reductions in non-irrigated corn yields relative to trend. More directly, there is still no substitute for a cool, wet July in terms of U.S. corn production.