One of the decisions the new farm bill provides to landowners is whether to update the payment yields used for the farm in calculating Price Loss Coverage (PLC) payments.  Previous posts have reviewed the programs in the new farm bill and the different decisions that need to be made beginning with the 2014 crop year (more information can be found here).  This post looks more closely at the decision to update payment yields.

Payment yields are records for the farm held by the Farm Service Agency, and they have previously been used to calculate payments for the Direct and Countercyclical Payment CCP) programs that were in the last two farm bills but are repealed by the current bill.

Section 1113(d) of the 2014 Farm Bill provides the owner of an FSA farm with a single opportunity to update the payment yields for the program crops on the farm.  This is a decision that is made at the sole discretion of the owner of the farm and it is made on a program crop-by-program crop (i.e., covered commodity-by-covered commodity) basis such that yields can be updated for one crop and not others.  The decision to update payment yields will be made for the 2014 crop year.  USDA will determine when that decision has to be made.

If the farm’s owner elects to update the payment yields, the payment yield for that covered commodity on the farm will be equal to 90 percent of the simple average of the yield per planted acre for the covered commodity on that farm for each of the 2008 to 2012 crop years.  If any of those crop years had a zero acres planted to the covered commodity, that year is excluded from the calculation.  The payment yield update calculation also utilizes what is known as a “plug yield” for the 2008 to 2012 crop year average.  If the yield in any one of those crop years is less than 75 percent of the average of the 2008 through 2012 county yields for that crop, USDA is to assign a yield for that crop year that equals 75 percent of the 2008 through 2012 crop year county average yield.  In other words, the calculation of the average yields cannot include any yield that is less than 75 percent of the average yield for the county in those crop years.

Payment yields are only used for calculating payments under the PLC program.  Because they are revenue programs calculating payments based on both prices and yields (actual crop year and five-year rolling Olympic averages of either county yields or all program crop yields on the farm), the Agriculture Risk Coverage (ARC) programs do not utilize payment yields.  The farm bill does not, however, include any explicit limitation on the decision for updating payment yields.  So while the payment yields are only used for PLC, the statute does not limit the update to only those farms participating in that program.  Based on this reading of the statute, producers and farm owners electing ARC should also be able to update the payment yields associated with the commodity’s base acres on the farm.  Finally, unlike the payment yield update provided by the 2002 Farm Bill, the 2014 Farm Bill does not require that the farm owner reallocate base acres (more on that decision can be found here) in order to be able to update payment yields; these decisions appear to be completely independent of each other.

The following provides examples of two payment yield update calculations based on county average corn yields and example farms in Brown and Carroll counties in Illinois.  Table 1 reports the 2008 to 2012 county average yield histories in both counties.  Corn yields in Brown county were above trend in 2008 and 2009, but below trend in 2010 and 2011.  Corn yields in Brown county were well below trend due to the drought in 2012.  The average corn yield from 2008 to 2012 in Brown county is 128.5 bushels per acre, which would result in a plug yield of 96.4 bushels per acre (0.75*128.5 = 96.4). 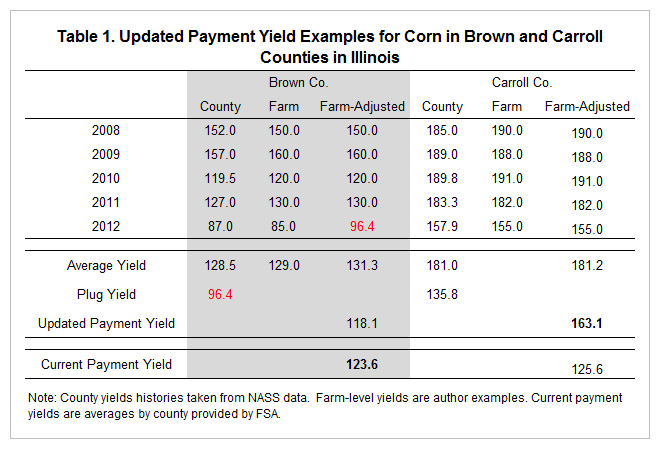 Average Payment Yields for Corn and Soybeans in Illinois 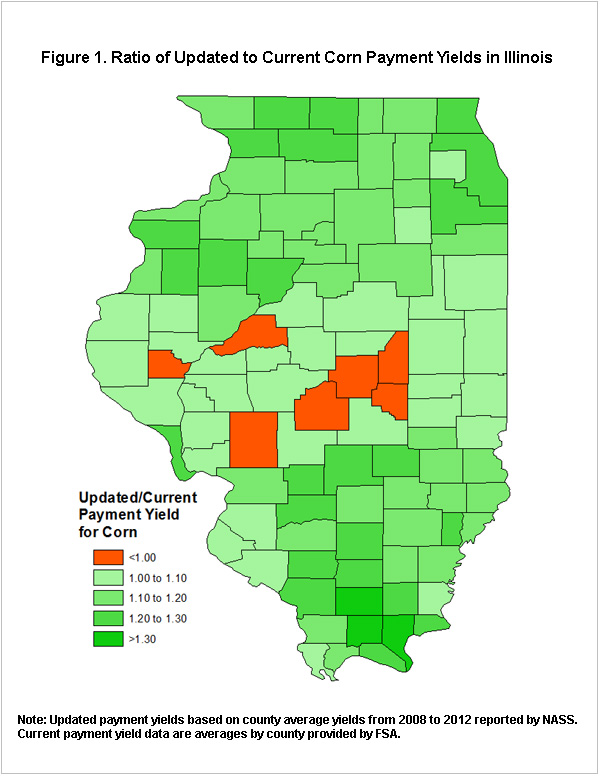 Exceptions include a band of counties in the central part of Illinois where updated payment yields based on county averages for corn fall below the reported average payment yields for the CCP program in those counties.  Even with the major yield impacts of the 2012 drought, most southern Illinois counties have experienced average corn yields which would result in larger payment yields through updating.

Figure 2 maps the ratio of county level soybean payment yield updates to current soybean payment yields.  As with corn, the data suggests most farms in Illinois will be able to increase payment yields for soybeans by updating.  A handful of counties in various parts of the state have yield histories over 2008 to 2012 which would result in payment yield reductions due to soybean yields below trend in multiple years during that period. 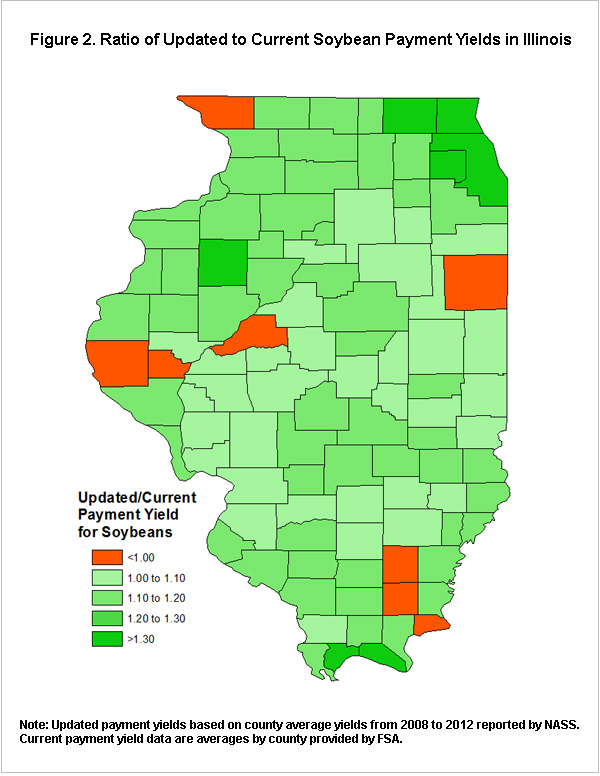 The 2014 Farm Bill allows landowners to make a one-time decision in 2014 to update the payment yields for program crops on their farms which would be used for PLC program payments.  The updated yields will be at 90 percent of the yields from the 2008 to 2012 crop years with plugs to ensure no yield is below 75 percent of county average yields for those years.  Farm owners should be able to update payment yields even if they decided to enroll program crops in either of the ARC program options, but payment yields are used only in calculating PLC program payments if they are triggered.  Because payment yields could be used in future farm bill programs, farms may want to consider updating payment yields without regard to any the program decisions or the decision to reallocate base acres.  Due to trend yields, most farms will benefit by increasing payment yields through updating.  However, some farms may not be able to increase payment yields by updating.  Since the decision to update is optional, farm owners should review their current payment yields and compare them to yield levels achieved from 2008 to 2012.