Building on the discussion of RIN pricing and stock holding (here) we explore what a ‘healthy’ RIN bank may look like, estimate RIN stocks for 2014. The availability of RIN stocks will interact with final mandates for 2014 to affect price of RINs and likely carry-out decisions for 2014 and thus mandates beyond that.  An analogy can be made to traditional stocks-to-use ratios in the grains markets. Stocks are used to help mitigate unforeseen supply or demand impacts on the market and serve as a buffer to price volatility.  Increased information (decreased uncertainty) and fewer barriers to trade would effectively lower the need to maintain large amounts of stocks.  Of course there are significant differences between grain stocks and RIN stocks:  RINS are produced throughout the year and face a one-time demand each year at the end of the compliance period; whereas, grain stocks face continues demand throughout the year and face essentially a discrete supply (i.e., harvest).  Nevertheless, less uncertainty about future mandates and less concern about fraudulent RINs (e.g., via a Quality Assurance Plan rule) and potential liability will lower the incentive to carry larger stocks of RINs and may impact the setting of future mandates.

The methodology proposed for setting the 2014 standards does not explicitly incorporate an estimate of the carry-in RIN stocks for 2014.  However, the proposed rule set the mandates in such a way that there would be little anticipated impacts on RIN stock levels; or in other words, in such a way that could stabilize RIN stocks at current levels, which were estimated at the time to be approximately 1.2 billion RINs available to be carried into 2014.

An important function of carry-in RIN is to “provide flexibility in the face of a variety of circumstances that could limit the availability of RINs” (from the proposed rule); essentially to smooth RIN prices due to unexpected fluctuations in supply and demand. That function can be viewed in much the same way as the market views grain stocks. Each year grain markets account for available grain stocks and corresponding prices in setting production levels and the market is thought to seek a ‘normal’ stocks-to-use ratio. Each year, unexpected market changes, from factors such as yields, results in deviations from that ratio.  Prices (high or low) signal to producers coupled with their expectations what optimal planting decisions to make, which inevitably realign stocks back to healthy grain stocks-to-use ratio.

In comparison to grains markets, what represents a normal stocks-to-use ratio, or in this case a ‘healthy’ RIN bank is less clear. By proposing mandates at levels that essentially will just be met by current year consumption, the methodology for setting mandates in the proposed rule effectively implies a stock ‘neutral’ position where beginning and ending stocks would be expected to remain relatively constant; e.g., near the previously estimated 1.2 (or more) billion gallons.  The final mandates will largely determine ‘demand’ side of the RIN market, particularly now that consumption has met the E10 blendwall, and thus the expected level for RIN stocks will remain a function of the methods used to set mandates.

An Updated evaluation of RIN stocks and production

Biodiesel RINs (D4) also represent a disproportionately large share of RINs carried into 2014 reflecting biodiesel consumption in excess of its own mandate in 2013. Those RINs will provide additional flexibility in 2014 compliance due to the nested nature of the mandates where biodiesel RINs can be used to comply with the biodiesel mandate, but also advanced and conventional mandates beyond that if needed. In fact biodiesel RIN stocks are so abundant that the proposed biodiesel mandate for 2014 of 1.28 billion gallons and rules limiting use of carried RINs will ensure some biodiesel RINs carried into 2014 will be relegated to broader mandates (see discussion of demotion here). It is likely that a portion of that production in 2013, was in response to the anticipated expiration of the biodiesel blend credit in January, which effectively subsidized the blending of biodiesel by $1.00 per gallon, but D4 RIN generation jumped in March 2014 and the pace for the first 3 months suggests RIN generation is on target to meet the biodiesel mandate, although it is quite early in the year.

The proposed total mandate of 15.21 billion gallons for 2014 appears to be less than was consumed in 2013 (figure 1).[1] Under those proposed mandates and under the assumption of flat RIN generation/consumption in 2014, a further build in RIN stocks of 546 million RINs would be expected. That would be added to the 1.872 billion gallon carry in, potentially resulting in a carry out stock of 2.418 billion gallons. Alternatively, for a carry-out target of 1.2 billion RINs, eligible biofuel consumption (in terms of RINs) would only need to be 14.538 billion gallons, or roughly  a billion RINs less than was produced, imported and then consumed in 2013, despite record feedstock prices for corn and soybeans at that time. 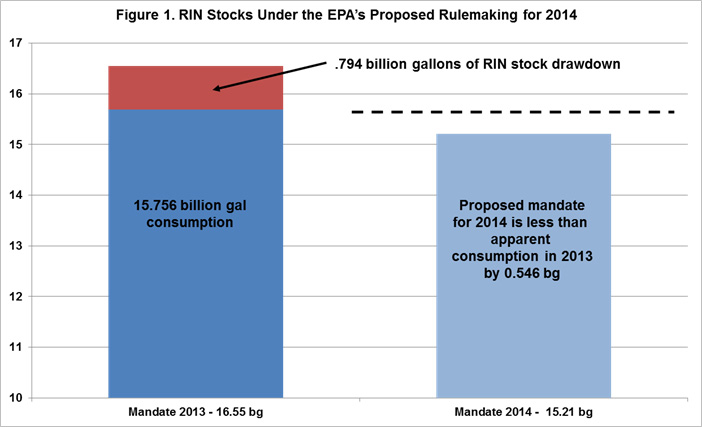 Some carry-in stock will always be used by obligated parties to cushion compliance costs in the next period and as a way to manage unforeseen supply or demand shocks. Yet, it is unclear under the current program and economic conditions what constitutes a ‘healthy’ carry-in stock: 5, 10, 15, or 20 percent of the current year mandate.  In 2013 under updated estimates, the carry-in stock in 2013 ended up meeting about 16 percent of the 2013 mandate (see figure 2). 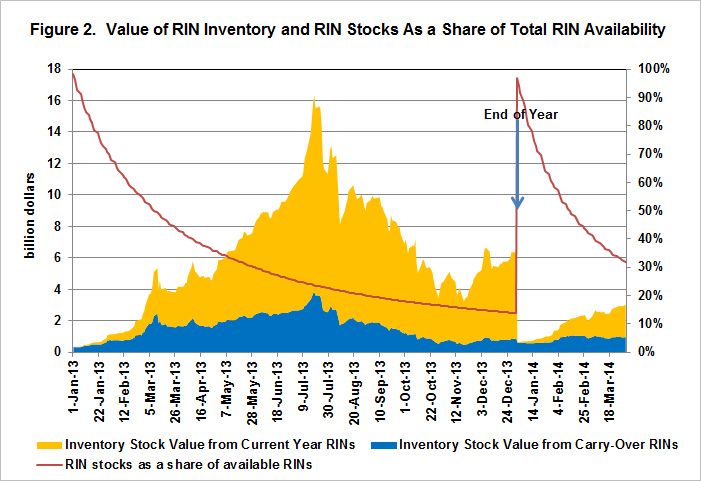 The size of surplus RINs can be viewed in terms of the upcoming mandate or in terms of the current year mandate.  Below, in Figure 3, we can see that in most years, there is some stock build up or drawdown.  What should be considered a considered a ‘healthy’ carry-in stock is not  a fixed number, however, but is contingent on mandated levels, and how RIN production occurs throughout the year.  Certainly mandates that are set high relative to ability to produce and consume biofuels could lead to a drawdown; however, if the market expects a higher mandate in the following year then there may be stock building in anticipation of higher future costs (see below).  For example, in 2011, the total mandate was set at 14 billion gallons and carry-in RINs that year were estimated to be at the 20 percent limit.  In that year, there was some RIN stock draw-down, (blue line below yellow line).  In 2012, a higher mandate dropped the percentage of carry-in relative to the mandate to 17 percent.  Production (or current year RIN generation) roughly equaled the mandate, and so ending stocks relative to the mandate were essentially unchanged.  In 2013, current year RIN generation was much lower than the mandate (due to blendwall and drought) and so there was substantial net drawdown, despite buildup of D4 RINs due to the biodiesel blends credit. 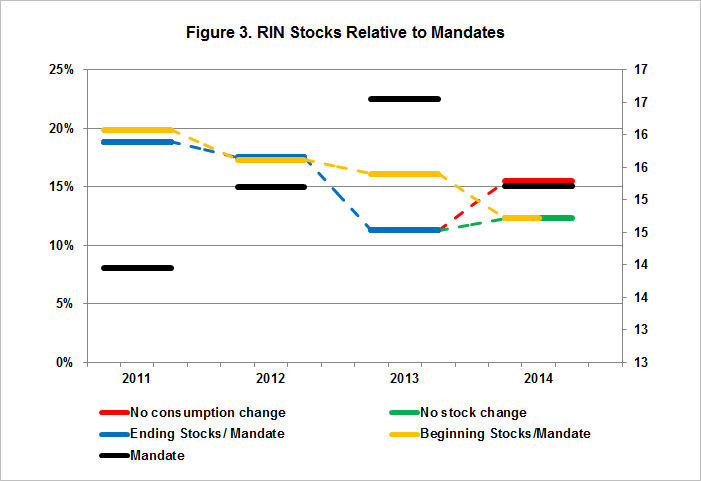 Looking at the estimated carry-out in 2013 relative to the proposed 2014 rule, it is possible that there will be RIN stock building (yellow line below blue line).  If current year RIN generation is the same as it was in 2013there will be stock building as a share of use; similarly if current year RIN generation falls from the production in 2013 to just meet the proposed 2014 mandate, there will still be stock building as a share of use even though stock volumes themselves are unchanged.  Whether or not stock building or drawdown occurs in 2014 will depend on the final mandates as well as any economic changes throughout the year that might significantly affect demand or supply of biofuels.

This simple analysis, while providing some insight, sidesteps the role that RIN prices play in stock changes and how changes in mandates change the anticipated use portion of the classic stocks-to-use ratio. Furthermore, there is not much history for us to look to for determining how the market selects an optimal stock (RIN inventory) ratio.  As such, determining a ‘healthy’ level is difficult. Lowering of mandates will lower the anticipated stock needs.  Similarly reducing uncertainty about future RFS policies will reduce the value of those stocks, leading to a lower optimal level of RIN carry-in. Plentiful RIN stocks will discourage current period RIN production and consumption feeding back into lower RIN stocks.  Given the proposed method for setting future mandates, such an observation of scaled back production and consumption of biofuels in 2014, could lead to more conservative mandates (and lower expected RIN prices) in the future.

Such a ‘path dependency’ in mandates could work in the other direction too. If market participants expected more binding mandates in the future, there would be an incentive to build stock levels today despite higher RIN prices to offset compliance costs in the future and build out infrastructure in anticipation of more use.  Observing increased production and consumption of biofuels in the current year, could translate to more aggressive mandates (and higher expected RIN prices) in the next year.

Therefore, RIN carry-over from 2013 could have long lasting impacts in the setting of future mandates. Biofuel RIN generation/consumption in 2013 appears to be higher than anticipated , resulting in significantly larger RIN stocks available to carry into 2014, adding flexibility to meeting the 2014 mandates. Further, mandate levels proposed for 2014 are lower than apparent consumption in the previous year in total and for biodiesel in particular, which would ease pressure on RIN stocks and contribute to lower RIN prices.  As a consequence, the market may decide to drawdown RIN stocks, which are expected to be less valuable, to adjust to lower mandates, and potentially dropping biofuel production/consumption in 2014 even below the mandate levels.  On the other hand, the market may build RIN stocks and approach the maximum 20 percent carry-in level.

In either case, as suggested in the proposed rule,

[1] Historically a small fraction of the RINs generated in a given year have been used for remedial actions or enforcement obligations for obligated parties to correct past errors or lost to spills or non-qualifying uses. These volumes are not incorporated into this calculation.