Trends in the profitability of ethanol production were examined in a farmdoc daily post on March 14th. Using a model of a representative Iowa ethanol plant, it was estimated that a plant earned $23 million in profits during 2013.  This was one of the best years ever for ethanol producers in terms of profitability. A new high in weekly profits of $2.55 per bushel of corn processed was reached in early December 2013.  The high profits were driven by a drop in corn prices that substantially exceeded declines in ethanol and DDGS prices.  It was also argued in the same post that there were logical reasons to suspect that the extended run of profits was unlikely to continue.  Just the opposite occurred, as ethanol production profits subsequently exploded off-the-chart.  Today’s post will examine the spike in the profits of ethanol producers in recent months and the reasons behind it.

The analysis is based on the same model of a representative Iowa ethanol plant used in the March 14th post and other earlier posts on the profitability of ethanol production (see earlier posts here, here, and here). Rather than repeat the details of the plant model the reader is directed towards the March 14th post for further details on the model. Figure 1 presents the updated (pre-tax) estimates of ethanol production profits per bushel of corn processed.  The historic spike in profits began during the first week in February 2014, peaked at the previously unheard level of $4.50 per bushel in the last week of March, and then dropped back to “only” $1.45 per bushel in the first week of May (note: just divide the bushel profits by 2.8 to convert to gallons).  The new peak profits were almost $2 per bushel higher than the previous record.  The net result was a profit for the representative plant of $23.4 million during the first four months of 2014, slightly more than the historically high profits earned over the entire calendar year of 2013. 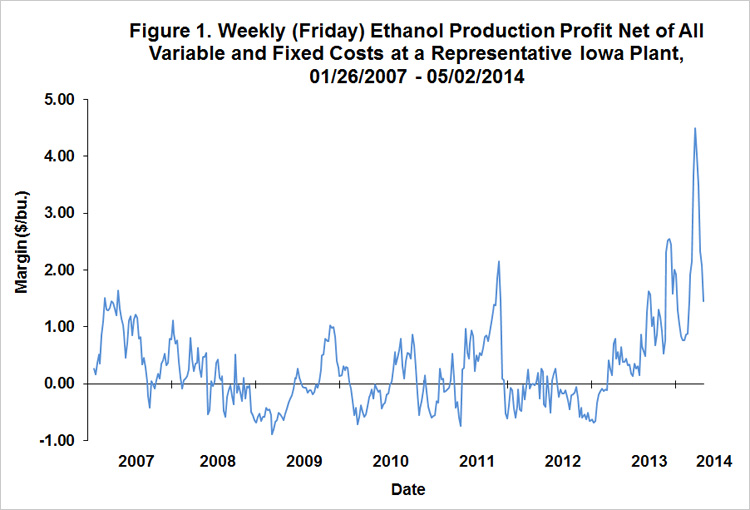 The reason for the spike in profits is simple, as shown in Figure 2.  Ethanol prices at plants spiked to new record levels exceeding $3 per gallon, while only modest increases in corn prices occurred.  More specifically, ethanol prices increased 63 percent between the end of January and end of March, while corn prices increased just 8 percent over the same period.  The underlying reasons for the spike in ethanol prices have been much discussed, and include: i) relatively high wholesale gasoline prices that support ethanol values, ii) strong export demand for ethanol, iii) low ethanol stocks going into the winter, iv) rail transportation congestion due to the severe winter weather, and v) continuing shortages of rail tanker cars due to ever rising crude oil production in the Bakken region of North Dakota.  It does not appear that a single factor accounts for the majority of the price rise, but instead, the combination of factors was something of a perfect storm. 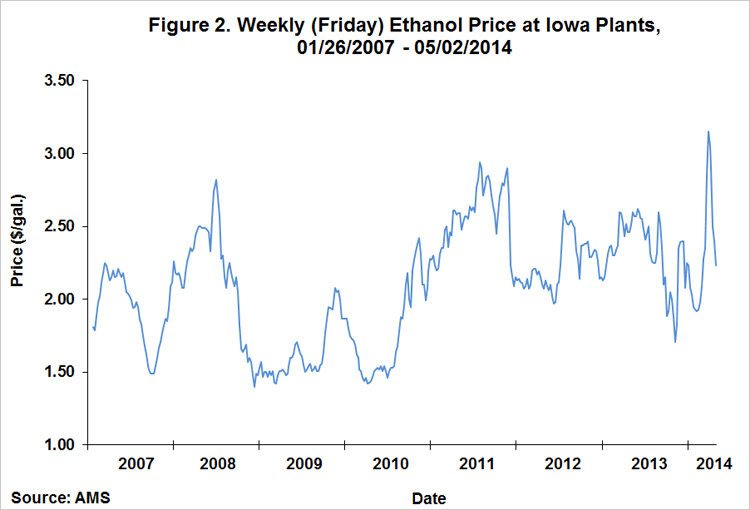 So, where to from here? As noted above, profits have already declined almost all the way back to where they stood at the beginning of the year.  Nonetheless, profits of $1.45 per bushel remain at a very high level by historical standards.  Economic logic still dictates that this situation is not likely to last.  As noted in the March 14th post there is a documented “co-integrating” relationship between ethanol and corn prices (see the paper by Mallory, Irwin, and Hays for a formal analysis), which simply means that the relationship between ethanol and corn prices tends to revert to levels implied by an equilibrium long-run level of ethanol production profitability.   If the ethanol price is too high relative to corn prices, then either the ethanol price must fall or the corn price must rise.  We can provide a rough idea of the kind of adjustment that may be in the offing using the profits shown in Figure 1.  Over 2007-2013, ethanol production profits averaged $0.20 per bushel.  Assuming this is the “normal” level of profits in the industry, then we should expect profits to eventually fall from the current level of $1.45 to $0.20.  If ethanol prices do all of the adjusting and other prices are held constant, the ethanol price would have to drop from the current level of $2.23 per gallon to $1.78 ($2.23 – $1.25/2.8) to restore equilibrium.  If instead corn prices do all of the adjusting and other prices are held constant, the corn price would have to increase from the current level of $4.95 per bushel to $6.20 ($4.95 + $1.25) to restore equilibrium (not taking into account the impact on DDGS prices).  For any particular episode it is difficult to know whether ethanol or corn prices will bear the brunt of the adjustment, but if corn prices now tend to drive ethanol prices due to the E10 blend wall, then one would expect ethanol prices to do the bulk of the adjusting.

Finally, several caveats should be mentioned regarding the profit analysis presented above.  First, there is substantial variation in capacity and production efficiency across the ethanol industry and this should be kept in mind when viewing profit estimates from the model. Second, the analysis assumes that input purchases and output sales occur at the spot prices for the week, which means that the impact of forward marketing strategies is not incorporated.  Third, some ethanol plants may not have been able to take full advantage of the high ethanol prices this winter and spring due to rail car shortages.

Ethanol production profits literally went off-the-chart in late winter and early spring. This was driven by a sharp increase in ethanol prices to new record levels due to a combination of factors.  Economic logic suggests this situation is unsustainable, and either ethanol prices must adjust lower or corn prices higher to restore a long-run equilibrium in profitability.  The most likely scenario is one where ethanol prices bear the brunt of the adjustment, eventually dropping as much as $0.40 per gallon from present elevated levels.