In a recent post here, Nick Paulson updated his estimate of RIN production (i.e., “Net-generation”, or production and importation of eligible biofuels less exported gallons) and carry-in RIN stocks for 2014. RIN stocks were drawn down in 2013 due to the blendwall and drought.  Such drawdown left a smaller inventory on-hand for obligated parties to draw upon in 2014 to meet unexpected changes to supply or demand.  However, the drawdown appears to be noticeably less than was anticipated in the proposed rule for 2014 volumes.  The level of the carry-in and carry-out inventories and whether they are growing or shrinking have implications for biofuel mandates and consumption in 2014 and beyond.

RINs as discussed most recently here and here, are the credits used to show compliance with the RFS mandates. Obligated parties and other market participants can buy and sell RINs from the current year or from the previous year that have been carried over through the banking provision of the RFS program.  Over-compliance with the mandates in a year allows obligated parties to “carry-out” surplus RINs over for use in the next year up to a 20 percent maximum limit relative to the mandates.  Those “carry-in” RIN stocks effectively serve as the beginning inventory of RINs for compliance that year.  To that initial inventory, market participants will add RINs earned throughout the year by purchasing of eligible biofuels and the blending of those biofuels into the transportation fuel supply.  Market participants can also add to their inventory by purchasing RINs from the open market.

The carry-in estimate is also relevant as an indicator of how binding the renewable fuels standard (RFS) mandates are or are expected to be in future years.  A “healthy” carry-in relative to the mandates in that year implies that there will be RIN inventory on hand to help shield the program and its participants from unforeseen conditions that could otherwise lead to unintended and adverse economic impacts. The RIN inventory held by the private sector functions similarly to grain stocks in that it acts as a reserve which can be drawn down to meet the RFS when current year biofuel use falls short of mandate levels. Indeed, when proposing mandate level for 2014, EPA noted that a volume of RIN stocks “…provide a mechanism for offsetting the negative effects of fluctuations in either supply of or demand for renewable fuels…” (Federal Register, November 29, 2013).

RIN prices as an indicator of market ‘tightness’

The more expensive it is for an obligated party to purchase an eligible biofuel and to blend it into the fuel stream for sale at the pump the more willing that obligated party will be to simply purchase a RIN on the open market.  In that regard, RIN prices are an indicator of several key factors at play in biofuel markets. As with grains, RIN stock levels and prices reflect how tight the market is.  In this case tightness in the market means that the biofuel mandates are ‘binding’ and obligated parties are finding it more and more expensive to meet their compliance requirements and so any RIN stocks held in reserve become progressively more valuable.

Higher feedstock prices, through drought or strong demand, put upward pressure on RIN prices as biofuel production costs rise, while rising petroleum prices may lower RIN prices, as ethanol and biodiesel become more competitive in fuel blending.  Because a portion of the stock of RINs can be carried into the next year, current vintage RIN prices will reflect not only the nature of the market this year, but also anticipation about how binding the market may be in the following year.  Prices are currently available for three vintages of RINs: 2012 (for compliance in 2013), 2013 (for compliance in 2013 or 2014), and 2014 (for compliance in 2014 or 2015).  The difference in those prices gives an idea of how much time value RINs have as a cushion for unexpected future compliance costs.

There was a rapid rise in RIN prices through the first half of 2013, which likely reflected a realization that a draw-down in RIN stocks in 2013, and perhaps a substantial one, might be followed by a similar draw down in RIN stocks in 2014 if mandates were held at legislated levels (see figure and associated farmdoc discussion here). Furthermore, high corn prices due to the 2012 drought added additional upward pressure on RIN prices as it became more expensive to refine ethanol. 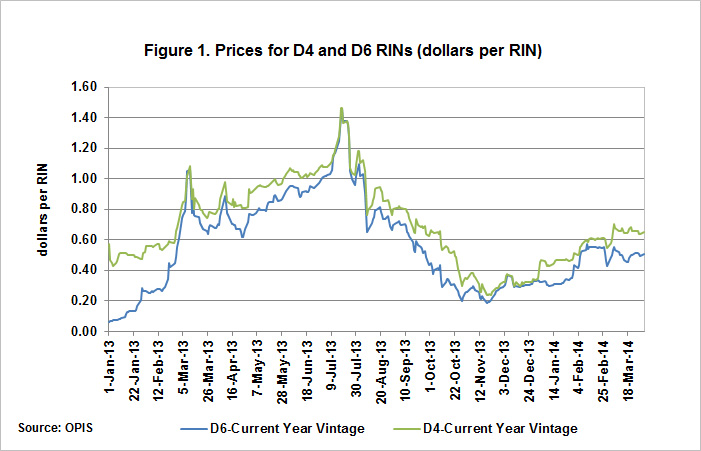 As a result of surging RIN prices, the value of the RIN inventory also shot up. Carry-in stocks for mandate compliance in 2013 were estimated to be approximately 2.66 billion RINs across all mandate classes.  The rapid rise in D6 RIN prices (those most often associated with corn ethanol) and D5 (advanced biofuel) and D4 (biodiesel) RINs was a market response to the anticipate drawdown in that stock number to meet a portion of the 16.55 billion gallon mandate for 2013 as well as a look forward to the statutory mandate of 18.15 billion gallons in 2014. The value of the carry-in inventory of 2012 vintage RINs rose from just over 300 million dollars in early January 2013 to over 1.5 billion dollars by early May, peaking at over 3.7 billion dollars by mid-July.[1] 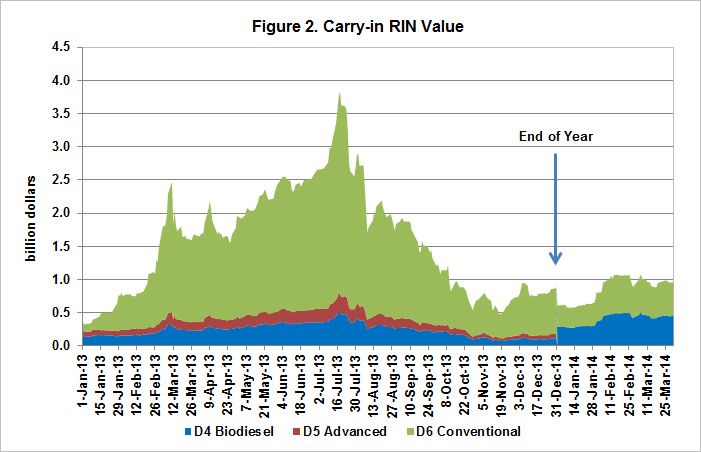 Policy proposals and anticipation of a change in the EPA practice of administrating EISA for 2014, as signaled in the final RFS for 2013 published in August of 2013, drove down RIN prices and consequently the value of the RIN inventory.  Prices bottomed out at the time of the EPA announcement in late November of its preliminary RFS rule for 2014. The carry-in inventory value actually rose slightly after the announcement, finishing the year at a value of less than 1 billion dollars. The value of the fixed volume of stocks carried into 2013 varied by more than a factor of 10 over the course of the year. 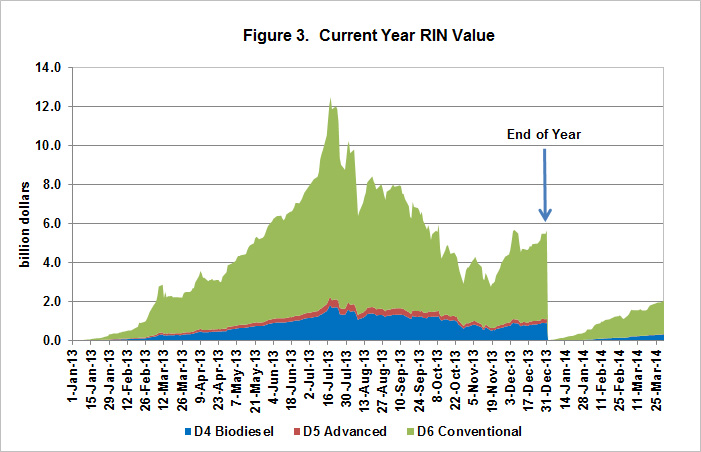 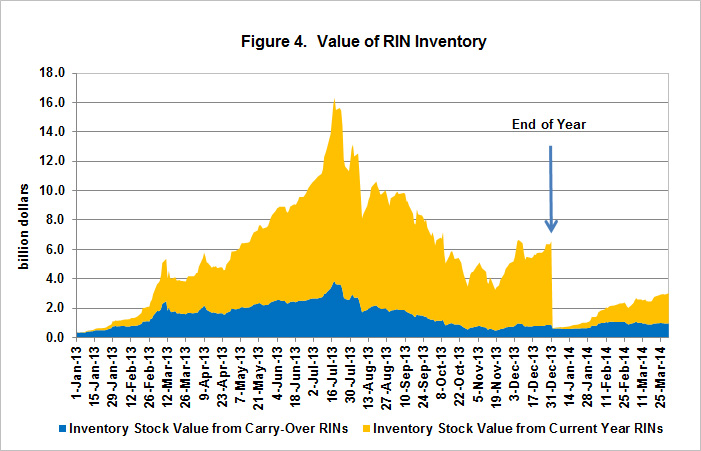 Combined you can see that the overall value of the RIN inventory in 2013 grew to over 16 billion dollars due to increased production of 2013 RINs and due to the spike in RIN prices last summer, but then fell to an ending value of approximately $6 billion by year’s end (see above). Those significant and rapid changes in inventory value reflect both what may be a ‘thin’ market for tradable RINs at certain periods of the year but also reflect a significant uncertainty about 2014 mandate levels and thus how much further RIN stocks might be drawn down (see discussion at farmdoc here).

It is clear that the bankable (and borrowable) nature of RINs allow obligated parties to optimize their compliance costs over time.  In the past, pre-blendwall, it was relatively inexpensive to generate and save surplus RINs allowed by the RFS and so obligated parties exceeded the annual mandates and built up an inventory of carry in RINs.  Now that gasoline consumption has fallen and the mandates have met the blendwall, we are seeing the opposite behavior; i.e., to meet compliance obligations firms are drawing down their RIN inventories, rather than building them up.    The market will determine what the optimal level of carry-in RIN stocks will be based on expected costs of compliance in future years.  Lower mandates imply lower RIN prices, which reduce the cost of carrying RIN stocks, but also reduce the need to carry such stocks.  As such, stock levels and prices for RINs should remain sensitive to any information on future mandates.  What might be an equilibrium level of stocks?  The size of current RIN stocks, implied consumption and mandates for 2014 will be considered next week in RIN Stocks Part II.