The 2014 farm bill provides a choice between a Price Loss Coverage (PLC) program and an Agricultural Risk Coverage (ARC) program.  The choice is not a 1 year decision; it is a 5-year decision.  This post therefore examines one potential price behavior that may occur over multiple crop years.  It suggests a simple method for estimating PLC payments.  Results of this study should be used as an illustration of the strategic thinking that needs to occur regarding this 5-year decision.

This study uses the average price for the 1974 through 2006 crop years and the current estimate for the 2013 crop year for barley, corn, oats, rice, sorghum, soybeans, and wheat.  The historical prices are from the U.S. Department of Agriculture (USDA), National Agricultural Statistics Service (NASS) Quick Stats database (see here).  The 1974-2006 period is used because prices fell within a range that was stable and trended neither up nor down.  These characteristics are desirable when examining the behavior of price.  The crops chosen for analysis are historically important farm program crops.  Peanuts are not included because, until the 2002 farm bill, peanut prices were strongly influenced by a marketing quota program.  It is unlikely that the behavior of peanut prices prior to 2002 is relevant to the future behavior of peanut prices.  Prices for the current 2013 crop year are from USDA’s April 2014 World Agricultural Supply and Demand Estimates Report (WASDE) (see here). 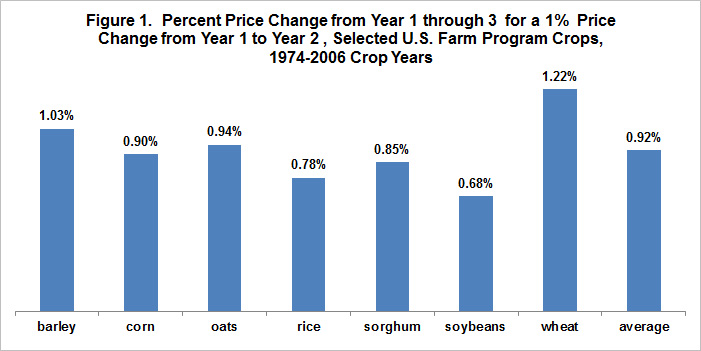 Figure 1 suggests that persistence of past price change into the next crop year may be a common price behavior of the selected program crops.  For barley and especially wheat the price change tended to become even larger in the next crop year.  However, for most of the crops as well for the average of all crops, slope was less than 1, implying that the change in price moderated in the next crop year.  This moderation is consistent with a price process that economists call mean reversion.  A mean reversion process implies that price will return to its mean value, or average over time after an extreme price change.

This observation suggests a simple forecasting method:  use the historical price paths to forecast future price behavior.  However, current prices are notably higher than prices during 1974-2006.  A simple adjustment mechanism is to increase each 1974-2006 crop year price by the ratio of the USDA estimate of the current crop year price to the average 1974-2006 price.  To illustrate, USDA’s current estimate of the 2013-2014 corn price is $4.60/bushel.  The average 1974-2006 crop year price is $2.37/bushel.  Hence, each 1974-2006 crop year price is multiplied by 1.94 ($4.60 divided by $2.37).  These adjusted crop year prices were then compared with the PLC reference price, with payments occurring when the adjusted price was less than the PLC reference price.  Figure 2 presents the share of years that PLC made a payment while Figure 3 presents the average per acre PLC payment.  This payment rate calculation includes the program parameter that PLC payments are received for only 85% of payment acres.  The base yield update option is used, so payment yield is 90% of average U.S. yield for the 2008-2012 crop years.

Estimated per acre payments are less than $5 per acre for all crops except rice.  Average per acre payment for rice is $31.  The low estimated average payments reflect a number of factors, but the most important is probably that the current 2013 crop year price is relatively high compared with the PLC reference price for all crops.  The range was 18% for sorghum to 55% for soybeans.  Barley, corn, rice, and wheat were all between 20% and 25%. 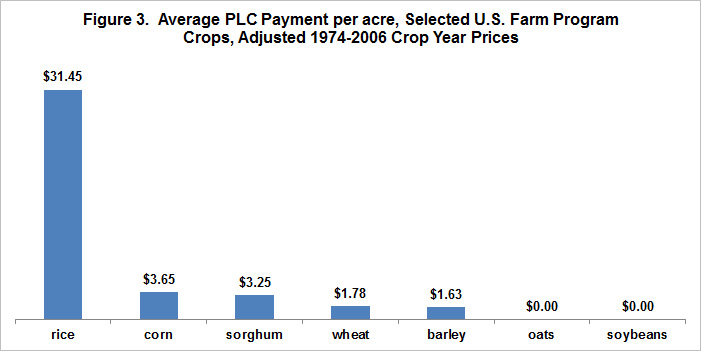 This study uses a simple analysis and a small data set.  Additional studies are needed, including additional studies of longer periods of persistence.  Thus, it is important to not put too much emphasis on any individual estimate.  Nevertheless, the study does suggest several insights into the ARC-PLC decision.