Last month’s article (farmdoc daily April 18, 2014) reviewed the return and cost advantage as the corn enterprise on a farm increased in intensity. The intensity of the corn enterprise is measured by corn acres relative to tillable acres and expressed as a percentage. This post continues the thought line from last months’ post and delves into cash rent and cash rent acres for the five groups of farms over the five-year period.

This post uses the same data as last months’ post – data spanning five years (2009-2013) from a group of central Illinois farms operating on higher productivity soils that are members of the Illinois Farm Business Farm Management Association. All revenue is attributed to the accrual method of accounting netted against the total economic expenses associated with the production of that revenue to arrive at accrual based management returns.

For each of the five years, the farms were sorted into one of five groups based on the percentage of acres devoted to corn production. The five groups are: 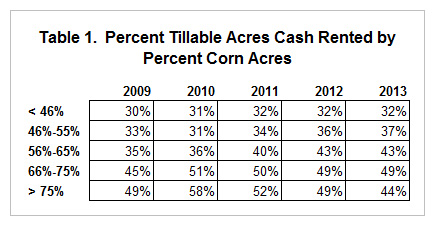 Table 2 reviews the accrual cash rent expense difference per acre from the average for Central Illinois High Productivity farms for the five groups. As one might expect, cash rent per acre generally increases from 2009 to 2013 for each of the five groups. The exception is in the Over 75% group from 2009 to 2010 where the cash rent per acre decreased. Within each year, the cash rent per acre generally increases as the percent corn acres increases. There are exceptions in each of the years but the general trend is increasing cash rents per acre. As you look at the variance between the highest and lowest difference for each year, it has generally been increasing as well. 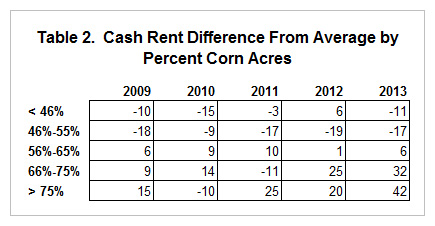 Table 3 looks at the accrual cash rent expense as a percent of the total accrual economic non-feed costs for the five groups. This increases as the percent of corn acres increases. The three lower percent corn groups have shown an increase over the five year period, but the two higher percent corn groups have stayed fairly stable, especially since 2010. 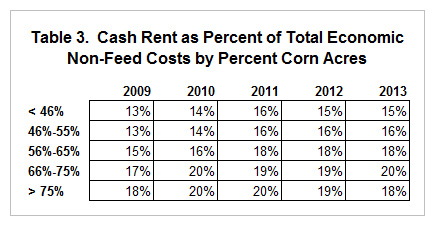 As the intensity of corn acres on a farm increases, we tend to see cash rent acres increase. What we are seeing may really be as we increase cash rent acres, we are growing more corn because it can be a higher grossing enterprise. However, we also see that the accrual cash rent expense increases as corn becomes a higher percentage of the acres on the farm. As we saw in the last months post there can be a cost (total economic cost) disadvantage to more corn. This post shows how one of the accrual land costs (cash rent) leads to this disadvantage.

The authors would like to acknowledge that data used in this study comes from the local Farm Business Farm Management (FBFM) Associations across the State of Illinois. Without their cooperation, information as comprehensive and accurate as this would not be available for educational purposes. FBFM, which consists of 5,500 plus farmers and 60 professional field staff, is a not-for-profit organization available to all farm operators in Illinois. FBFM field staff provide on-farm counsel along with recordkeeping, farm financial management, business entity planning and income tax management. For more information, please contact the State FBFM Office located at the University of Illinois Department of Agricultural and Consumer Economics at 217-333-5511 or visit the FBFM website at www.fbfm.org.

Krapf, B., D. Raab, and B. Zwilling. "Is There An Advantage To More Corn Acres in Your Rotation?" farmdoc daily (4):71, Department of Agricultural and Consumer Economics, University of Illinois at Urbana-Champaign, April 18, 2014.