Both corn and soybean prices have fallen since last summer, with corn falling more than soybeans. Because corn prices have fallen more the soybean prices, the soybean-to-corn price ratio has increased, signaling that soybeans have become relatively more profitable than corn. This leads to speculation that corn acres will decrease in 2014, while soybean acres will increase. Acreage shifts may occur. However, high soybean-to-corn prices in the spring do not necessarily signal high soybean-to-corn price ratios at harvest. Therefore, relative returns between corn and soybeans may change.

Herein, soybean-to-corn price ratios were calculated using projected prices, which are used to set crop insurance guarantees. Projected prices are average of settlement prices of Chicago Mercantile Exchange (CME) contract during the month of February. The December contract is used for corn and the November contract for soybeans. Use of these projected prices provides a good indication of relative prices in the spring prior to planting. 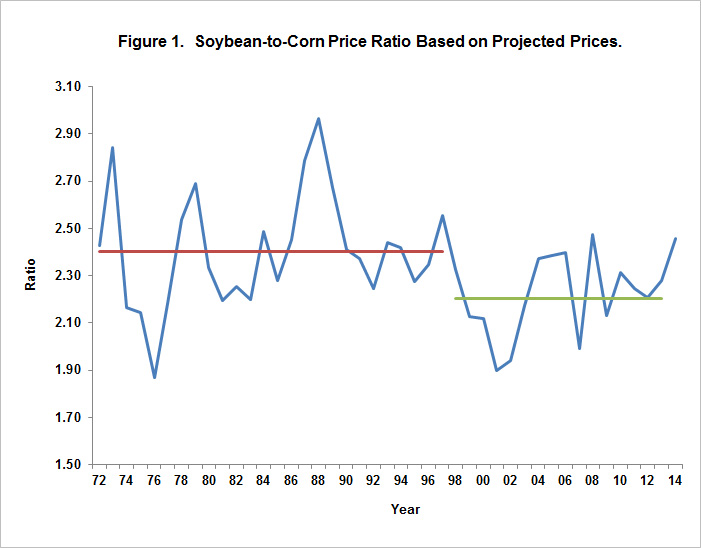 Relative corn and soybean profitability in 2014 will be influenced by how long price ratios persist. In particular, the relationship at harvest will be important in the final determination of relative returns. To see if high or low soybean-to-corn price ratios has historically persisted till harvest, a harvest soybean-to-price ratio was calculated using harvest prices used to determine revenue for crop insurance. Harvest prices are the average settlement prices of October CME futures prices (December contract for corn, November contract for soybeans). 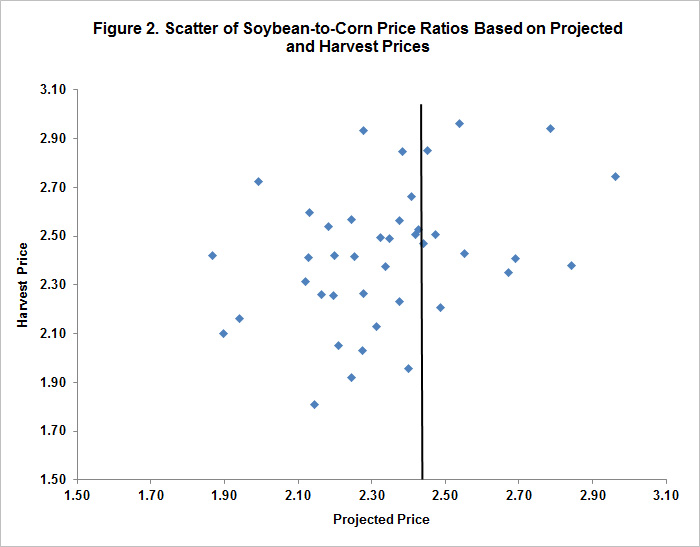 Acreage decisions will be impacted by relative prices being offered by the market; however, relative prices at harvest could differ from those in the spring. This suggests that farmers switching acres this spring should consider locking in some of the return difference through marketing contracts. It also suggests making acreage changes based strictly on relative prices may not result in the acreage mix that optimizes profits. Longer run rotational and yield considerations should enter into planting decisions.