Average grain farm incomes in 2014 likely will be much lower than 2013 incomes. Corn prices near $4.20 per bushel combined with above average yields could result in average incomes on grain farms in Illinois around $45,000 per farm, slightly below the average for the years from 1996 through 2005. A scenario that would result in average incomes near $134,000 per farm, the 2013 level of average income, would be above average yields combined with corn prices near $4.80 per bushel. This is a large range ($45,000 to $134,000), and it represents the likely range of average grain farm incomes over the next several years, with lower incomes possible if low commodity prices occur. 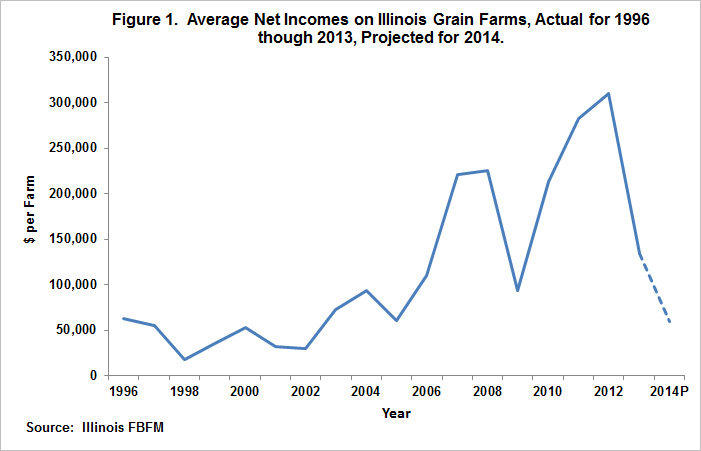 While grain prices and yields are far from certain, most current projections of prices and yields result in much lower incomes for 2014. To illustrated, 2014 net incomes are projected under the following scenario:

The scenario is based is for 2014 to be an above average year, with higher yields leading to more supply and lower grain prices.

Second, crop insurance payments are projected lower in 2014. In 2013, the average insurance payment for corn insured in Illinois was $54 per acre (see Summary of Business at the Risk Management Agency). The majority of these payments resulted because the 2013 harvest price of $4.39 was 22% below the 2013 projected price of $5.65. In 2014, the projected price for corn is $4.62 per bushel. A 22% price decline – similar to the 2013 decline – would result in a $3.59 harvest price. At that price level, gross revenue would be much lower than those used to generate the $45,000 net income projection. Higher crop insurance payments would not offset gross revenue losses, leading to a much lower income projection than $45,000.

Differences in yields and prices will impact revenue projections. To illustrate, average net income is projected with a higher and lower set of prices. Yields are held constant at the above average levels.

For higher prices, income projections are given for a $4.65 corn price and an $11.25 soybean price, levels slightly above expected long-run averages (farmdoc daily, February 27, 2013). Continued strong demand for grains could result in these price levels. At these price levels, average net income is projected at $108,000. A change in price from $4.20 to $4.65 for corn, an increase of $.45 per bushel, has a large impact on incomes.

For lower prices, a $3.75 corn price and a $10.25 soybean prices are used in income projections. This scenario results in -$7,000 of average net income. This scenario assumes that farmers enroll in the ARC commodity program and that ARC makes $40 of payments per corn base acre. The other farm program alternative, Price Loss Coverage, would not make payments at these projected prices.

Schnitkey, G. "Revenue and Costs for Corn, Soybeans, Wheat, and Double-Crop Soybeans, Actual for 2007 through 2013, Projected 2014." Department of Agricultural and Consumer Economics, University of Illinois at Urbana-Champaign, June 2014. Accessed June 24, 2014.