Position limits – the maximum number of futures contacts that can be owned or controlled by an individual or entity – are back in the spotlight. Readers may recall from a three-part farmdoc daily series (October 17, 2012, October 24, 2012, October 31, 2012) that the Commodity Futures Trading Commission (CFTC) published new position limit rules on 28 “core referenced contracts” on physical commodities. These rules were scheduled to become effective on October 12, 2012, and would apply to futures contracts, options on those futures, and swaps that are economically equivalent to the exchange-traded contracts on these same underlying commodities. Of these 28 commodities, 19 are major agricultural commodities (see Table 1), so these new position limits would have a substantial impact on the agricultural sector.

Two trade groups filed suit in the US District Court for the District of Columbia to overturn these new regulations, claiming that the CFTC had overstepped its authority under the Dodd-Frank Act. The judge in the case agreed, and issued a ruling on September 28, 2012 that tossed out the new rules and sent everything back to the CFTC for further work. This is where our series ended.

On November 15, 2012 the CFTC voted 3-2 to appeal the ruling, and on April 5, 2013 it submitted arguments supporting its request to overturn the decision. However, the CFTC also was developing a revised proposal that met the judge’s requirements, and on October 28, 2013 the CFTC withdrew its appeal. The CFTC’s revised proposal was published on December 12, 2013, with a public comment period ending February 10, 2014. Based on the large number of public comments, the comment period was reopened on June 12 for three weeks, and then extended again until August 4; to date there have been more than 200 comments from interested parties. CFTC staff also held a full-day public roundtable on June 19 with a series of presentations by panelists from industries that would be affected by the CFTC’s latest proposal.

Why does the position limits issue continue to generate such broad interest? And why should farmdoc daily readers care about any of this?

Let’s answer the second question first. Most farmdoc daily readers who use the futures and options markets will never have futures or options positions large enough to be affected by these CFTC limits. But in many cases, the companies that readers deal with – grain elevators, meatpackers, and dairy processors on the end-product side of the marketing chain; refineries, distributors, and other suppliers on the input side – must deal with position limits because of the larger volumes of commodities they handle. If these new limits interfere with the ability of output buyers (elevators, packers, processors) and input sellers (farm supply dealers and distributors) to efficiently manage price risks, these risks may be passed along to farmers in the form of lower prices for the products they sell and higher prices for the supplies they buy. Nearly all of the 200-plus comments have been from commercial hedgers and related industry groups that believe they would be adversely affected in some manner by the new rules.

To answer the first question, the high level of interest is due in part to the simple fact that this is a big proposal (160-plus pages) and contains lots of changes. But the original language of the Commodity Exchange Act as enacted in 1936 also plays an important part in this. Congress cited “Excessive speculation in any commodity… causing sudden or unreasonable fluctuations or unwarranted changes in the price of such commodity…” as the disease for which position limits are the cure. But at what point does speculation become “excessive”? Does it require “sudden or unreasonable fluctuations or unwarranted changes in the price” before it is considered “excessive”? If so, what criteria should be used to determine if a price change is “sudden” or “unreasonable” or “unwarranted”? After nearly eighty years these basic questions still have not been answered. The current system of position limits is far from perfect, but most market participants have learned how to work with it. The CFTC’s proposal, which was prompted by the Dodd-Frank Act, is a game-changer for many of these large commercial users, and in many cases will affect how these companies conduct business and manage risks. Interested farmdoc daily readers can read the CFTC’s proposal as published in the Federal Register and review the public comments.

Single Month and All Months Limits 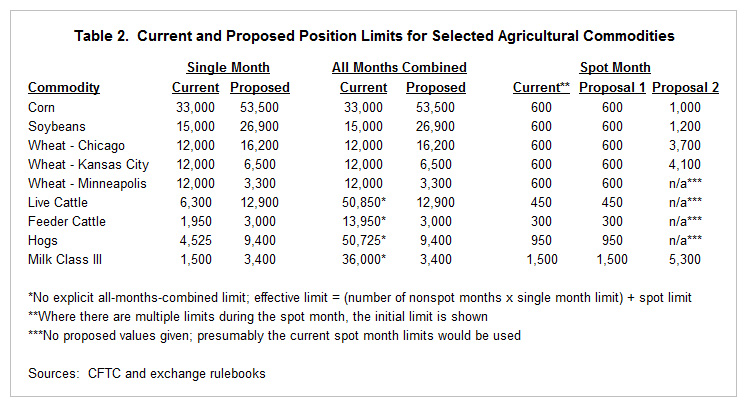 Wheat would be divided into three distinct groups: Chicago wheat limits would receive a slight increase but Kansas City and Minneapolis wheat limits would receive substantial reductions. The proposed limits reflect the size of the corresponding futures markets, rather than the production levels of the par classes of wheat. Hard red winter wheat (Kansas City) accounts for more than one-third of the US wheat crop, while hard red spring wheat (Minneapolis) and soft red winter wheat (Chicago) each make up less than one-fourth of total production.

One of the CFTC’s goals in this proposal is to create consistency in position limits by applying a uniform rule across all commodity markets. For example, single month and all-months-combined limits are based on open interest, and the single month and all-months limits are set at the same level for each individual grain. These commodities have seasonal production patterns, are storable, and prices (and supplies) across months within the same crop year are linked by carrying costs. Consequently, coordination between non-spot month limits and all-months-combined limits can prevent market distortions in one month from affecting prices in other related months.

The logic behind this coordination breaks down for livestock and dairy, which are produced continuously and for the most part are non-storable. Prices (and supplies) in any contract month are largely independent of prices (and supplies) in other months, so linking them does not prevent market distortions in one month from affecting prices in other related months. All-months-combined limits do not serve any useful purpose for non-storable, continuous-production commodities, and for this reason they were eliminated in these markets in 1990. However, they would be reinstated under the CFTC’s “one size fits all” approach, and just like in other commodities the all-months-combined limits would be identical to the corresponding single-month limits. These all-months-combined limits are substantially smaller than the current “implied” limits and could sharply reduce hedging activity.

Spot month limits apply to contract months in or near the delivery or final settlement period, when the risk and potential impact of a market disruption are greatest. Spot limits are based on deliverable supply, which in turn determines whether or not a market is vulnerable to a “squeeze” or other market disruption. The CFTC proposes to set spot limits at no greater than one-quarter of the estimated spot-month deliverable supply for both physically-delivered and cash-settled contracts. To do this it proposes three alternatives: 1) keep all spot limits at current levels (shown as “Proposal 1” in Table 2); 2) set certain spot limits based on deliverable supply data submitted by CME Group (shown as “Proposal 2” in Table 2); or 3) set spot limits at levels recommended by the exchanges, at the CFTC’s discretion.

Beyond tinkering with the numbers for the various limits, the CFTC also proposes some major changes to the ways that hedges are constructed and managed before they can be considered bona fide hedges. Two of these in particular are worth highlighting, and are the subject of a number of comment letters from commercial hedgers. One proposal would place restrictions on anticipatory hedges, which are based on anticipated rather than formalized purchases or sales, and use a futures or options position as a “place-holder” for an actual transaction that will occur at some later point in time.

The other proposal would require cross-hedges – in which a futures or options contract on one commodity is used to hedge a different commodity – to have a clear explanation or reason, such as an economic relationship, why the prices of the two commodities move together, rather than simply show that they are highly correlated. Cross-hedging is a common practice and is done when there is no futures contract for the commodity being hedged, or the available futures contract has different specifications or is illiquid. Fertilizer, diesel fuel, and propane are examples of commodities that are frequently cross-hedged using other contracts.

Both changes would impose new recordkeeping and reporting requirements, and are part of a broader effort by the Dodd-Frank Act to crack down on speculators. Textbook hedging examples are fairly straightforward, but commercial hedges can be quite complicated, and actively managing a hedge can look a lot like speculation to the outside observer.

After the comment period ends on Monday, the CFTC has a range of possible actions. At one extreme it could implement the current proposal as-is; this seems unlikely because of the litigation surrounding this matter. At another extreme it could drop the entire matter and leave the status quo in place; this also seems unlikely.

Between those two extremes, the CFTC might develop an entirely new proposal and publish it in the Federal Register for a fresh round of public comments. This also seems unlikely because of the time and effort invested in current proposal. The most likely outcome is that the CFTC will attempt to address the public’s concerns, and incorporate these points into a set of revised rules that will be announced and implemented at some future date.