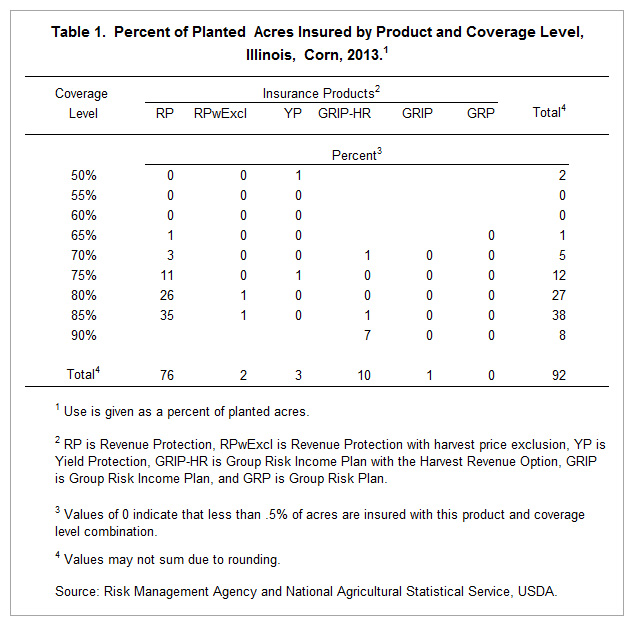 Harvest prices for corn and soybeans likely will be below projected prices. In these cases, RP and RPwExcl will make the same payments. Similarly, the county level products with and without the guarantee increase will make the same payments. As a result, the following does not differentiate between products with and without guarantee increase provisions.

Yields Below Which Corn Revenue Products Will Make Payments

In most Midwest states, the 2014 projected price for corn is $4.62 per bushel. The harvest price will be determined based on the average of settlement prices of the December 2014 Chicago Mercantile Exchange (CME) corn futures contract during the month of October. Currently, the December 2014 contract is trading near $3.70 per bushel. A harvest price of $3.70 would be 80% of the $4.62 projected price. 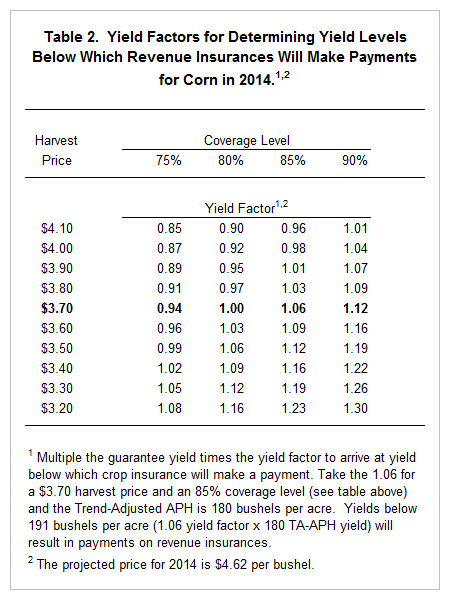 A 185 bushels per acre corn yield would be consistent with an average yield factor across all Illinois farms of 1.10. At a $3.70 harvest price, the 1.10 factor would be above the 1.06 factor for the 85% coverage level. Some farms would have lower yields and collect insurance payments, but the majority would not collect crop insurance payments. A 200 bushels per acre yield would be consistent with a 1.19 yield factor

It is possible that average yields in Illinois will be lower than expected. This situation would lower total supply, likely leading to an upward price response (farmdoc daily, July 21, 2014). In this case, the harvest price likely would be above the current $3.70 trading level of the December contract, thereby offsetting lower than expected yields, again leading to low crop insurance payments.

Yields Below Which Soybean Revenue Products Will Make Payments

Crop insurance payments are less likely for soybeans than for corn. The 2014 projected price for soybeans is $11.36 per bushel. The harvest price will be determined based on the average of settlement prices of the November 2014 CME soybean futures contract. Currently, the November 2014 contract is trading above $10.80 per bushel. A $10.80 harvest price is 95% of the $11.36 projected price. 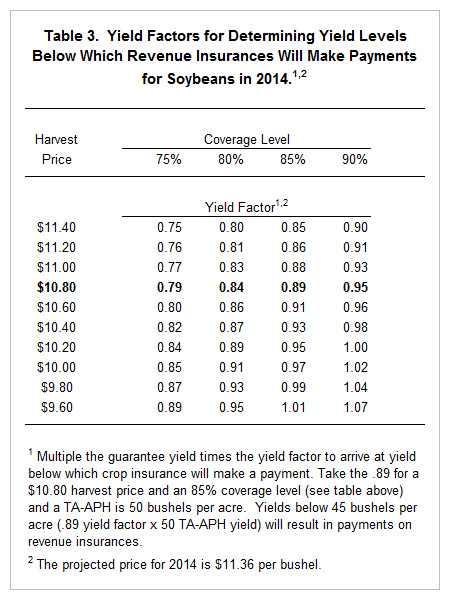 Below average yields seem unlikely at this point given growing conditions up to this point.

Schnitkey, G. "Revenues and Costs for Corn, Soybeans, Wheat, and Double-Crop Soybeans, Actual for 2007 through 2013, Projected 2014." Department of Agricultural and Consumer Economics, University of Illinois, June 2014.