Expected corn yields are high for many areas of the corn-belt. In central Illinois, for example, corn yields may average 220 bushels per acre on many farms.  However, a 220 bushel yield will not result in positive returns for corn, given current expected 2014 crop prices and given that farmland is rented near the average cash rent.  To have positive returns, yields must be exceptionally high.  In this year, those farmers forward contracting a substantial portion of 2014 production likely will have higher returns than farmers who did not contract.  Due to difference in yields and marketing decisions, there will be a wide range in revenues across farms.

Note that exceptionally high yields in central Illinois may be consistent with a 188 bushel estimate of the Illinois state yield reported by NASS in its August Crop Production Report).  Central Illinois appears to have had better growing conditions than other areas in Illinois.

Gross revenue are estimated for the following five yields:

Gross revenue are shown for two prices.  The first is a $3.70 per bushel corn price.   Futures prices currently suggest an average price of $3.70 for the 2014 crop.

Including the forward contracting scenario does not suggest that all farmers should have priced grain prior to harvest.   It is easier to make marketing decisions after the fact.  In several recent years, forward contracting grain in the spring would have reduced overall prices received during the marketing year.  This scenario is included to recognize the fact that some farmers have pre-harvest priced a sizable portion of 2014 grain sales.

The following examples include crop revenue (yield times price).  Also include is $5 per acre to cover payments expected to be made through the county option of Agricultural Risk Coverage, a commodity program contained in the 2014 Farm Bill.  Also include are $10 of crop insurance payments at the 190 bushel per acre yield level. 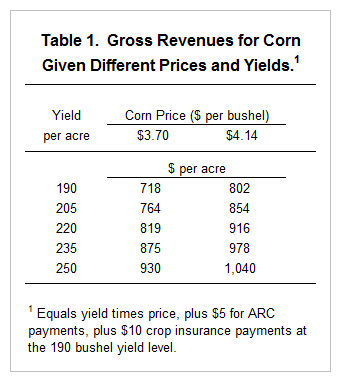 In all years, gross revenues vary across farms due to differences in yields and prices, with marketing decisions impacting prices received for crops.  Farmers who priced 2014 grain in the spring likely will higher revenues and returns than farmers who did not price grain.  Revenues in Table 1 give a realistic range of farm revenues in central Illinois on high-productivity farmland.

Yields shown in this paper are for east central Illinois, an area likely to have exceptional yields.  Other areas will not have as good of yields as those shown in this paper.  Revenues in lower yielding areas could be much lower than those illustrated in the paper.

Schnitkey, G. "Revenue and Costs for Corn, Soybeans, Wheat, and Double-Crop Soybeans, Actual for 2007 through 2013, Projected 2014." Department of Agricultural and Consumer Economics, University of Illinois, June 2014.