Throughout the United States and around the globe, consumers are increasingly concerned with how their food is produced. These concerns range from healthfulness and food safety to the environmental impact of various production methods and the treatment of animals and farm labor. One concern that is often expressed by those both inside and outside of the agricultural community is the belief in the “loss of the family farm” or “the rise in corporate farming.”

The Census of Agriculture, collected every five years by the USDA, offers a wealth of information on America’s farms and ranches. This article explores the legal structure of Illinois farms in an effort to address the notion of “family farms” and “corporate farming.”

The most recent Census of Agriculture, conducted in 2012, suggests that Illinois is home to 75,087 farms. The Census defines a farm as any place from which $1,000 or more of agricultural products were produced and sold, or normally would have been sold, during the reference year. The Census classifies all farms by legal status (previously referred to as “type of organization”). The classifications include:

Figure 1 shows the breakdown of Illinois farms by the four broad legal status categories in the four most recent Censuses. One interpretation is that the chart suggests the share of farms under each legal structure classification has shown only limited variation. On the other hand, some may be drawn to the observation that over the decade spanning the 2002 to 2012 Censuses, the number of farms classified as corporations increased by 43.8% while family or individual owned farms increase by 0.7%. 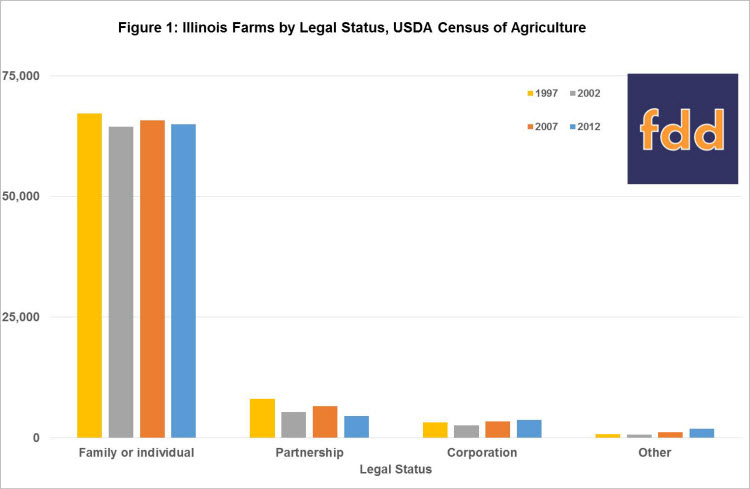 There are a number of reasons why farm owners would want to incorporate. Corporations carry a number of income tax advantages, including different deduction limits and the ability to alter the fiscal calendar of the farm from the fiscal of the farm household. In addition, corporations protect household accounts in the event of a lawsuit created by the farm operation, and they limit the liability of the assets of the corporation in the event of a catastrophic lawsuit. Corporations also ease the intergenerational transfer by allowing the owners to gift or to sell units of the stock to the next generation. At the same time, corporations carry additional expenses related to creating and maintaining necessary paperwork and filings, and corporations are subject to capital gains tax on the value of shares.

Share of Farms, Value of Production, and Acreage by Legal Status

As we discussed in a previous article in this series, looking at farm numbers alone can paint an inaccurate picture of various features of the population of Illinois farms (farmdoc daily, July 30, 2014). Figure 2 therefore shows the share of the number of farms, value of production, and farm acreage by legal structure classification. The chart shows that while 86.5% of Illinois farms are sole proprietorships, the classification accounts for a smaller share of the value of production (68.2%) and farmland acreage (75.3%). Further, family held corporations account for a small share of farms (4.4%) but a larger share of value of production (14.8%) and acreage (9.9%). 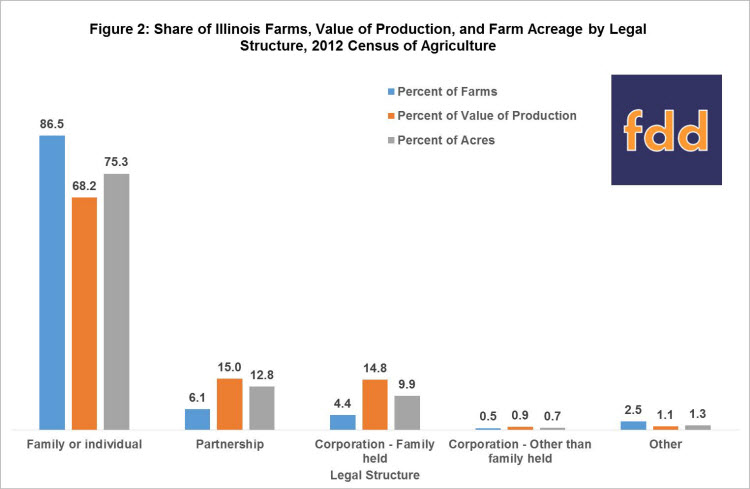 Given the additional costs required with incorporation, it would make sense that smaller farms would be less likely to organize as corporations. Figure 3 plots the distribution of farm legal structure by the acreage category discussed in a previous article (farmdoc daily, July 16, 2014). While corporations, either held by families or not, account for only 4.9% of Illinois farms, they account for 17.7% of the farms in the largest size category, 2,000 or more acres. However, 4.7% of Illinois’ smallest farms (those with fewer than 10 acres) are legally organized as corporations, and sole proprietorships account for the majority of farms in each acreage class. 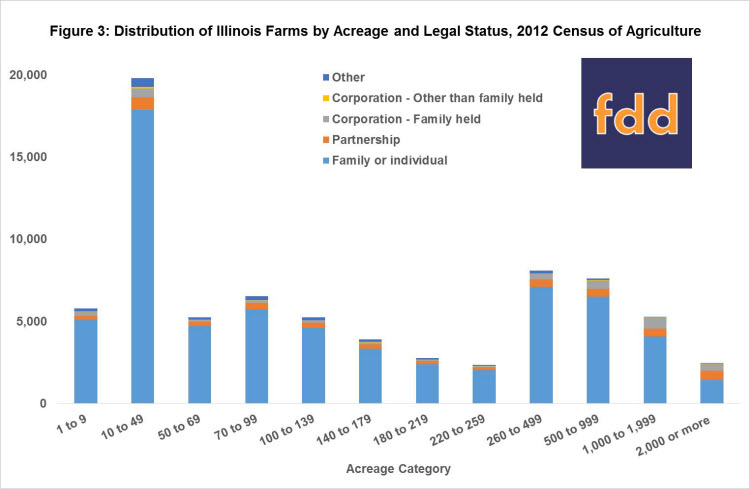 Kuethe, T. "Highlights of the Census of Agriculture: A Closer Look at Farm Size."farmdoc daily (4): 141, Department of Agriculture and Consumer Economics, University of Illinois at Urbana-Champaign, July 30, 2014.

Kuethe, T. "Highlights of the Census of Agriculture: Distribution of Farm Size." farmdoc daily (4): 132, Department of Agricultural and Consumer Economics, University of Illinois at Urbana-Champaign, July 16, 2014.